The Greatest? Part 3: Leigh – The Big Picture / Huppert – A Story of Women

The next selections in this series find Jennifer Jason Leigh and Isabelle Huppert working in almost opposite circumstances; UNE AFFAIRE DE FEMMES sees Huppert in an acclaimed period piece, with Claude Chabrol, a favourite director with whom she has worked regularly since 1978’s VIOLETTE) at the helm. On the other hand THE BIG PICTURE finds Jennifer Jason Leigh in a small role in an atypical film from director Christopher Guest and working in broad comedy, which really can’t be described as her comfort zone.

If there is one thing that is evident from THE BIG PICTURE it is that Christopher Guest thrives as a filmmaker when his work is largely improvised. This film, unlike the subsequent BEST IN SHOW and A MIGHTY WIND, feels very closely scripted and thanks to that it also feels very stiff, bereft of the dazzling comic energy of THIS IS SPINAL TAP and Guest’s other directorial work.

There are several big problems with THE BIG PICTURE, but the most pressing, obviously, is that it’s just not very funny. It’s hard to put your finger on the problem, but to me it felt like the film was just too on the nose, the jokes far too obvious. It’s the story of Nick Chapman (Bacon) who wins an award for his student film and finds himself courted by producer JT Walsh, who sets about allowing Nick to make his dream project… with just a few changes. The head slapping obviousness reaches its zenith in a late scene in which Walsh, whose ‘creativity’ has ended up taking Nick’s black and white film about a love triangle between three middle-aged people and turning it into a pitch called Beachnuts, is in a set that’s clearly supposed to be Hell; the studio head as Satan. It’s not just that though, everything feels rote and lazy, from the opening spoof student films and their makers (one, a conceptual artist, played by Jennifer Jason Leigh) to the sub-plot in which a starlet (Hatcher) attempts to seduce the hot young director, right up to the so predictable that you’ve already guessed it closing shot.

The story clanks through the expected moments. Nick gets a whiff of success then cheats on his girlfriend (the lovely Emily Longstreth), leases a Porsche, begins ignoring his best friend and cinematographer (McKean). Then his deal evaporates, which leads to the hugely unconvincing last half hour, in which Nick reforms, and gets another shot thanks to a homemade music video for a band called Pez People. If anything in this movie should have been a home run it’s this, but the song isn’t funny, the video (despite Leigh’s energetic oddness as a dancer) is terrible, and also not funny. This, as much as the awfulness of Nick’s student film, seriously undermines the whole plot of the film. Ultimately it’s marooned in a wilderness between being believable enough for us to be interested in Nick and his journey and crazy enough to work as comedy.

The cast don’t help very much. Kevin Bacon is uncharacteristically bland as Chapman, Martin Short is at his nigh insufferable worst as Nick’s sycophantic agent (a joke that runs far too long to work in the same way that Spinal Tap’s Artie Fufkin did) and Michael McKean seems as ill at ease as Guest with the heavily written dialogue. On the plus side, Emily Longstreth (who, sadly, hasn’t made a film since 1994) is charming as Bacon’s girlfriend, and she’s fun in a sequence in which Bacon fantasises her as a film noir femme fatale and JT Walsh, despite the fact that all of his character’s actions are the most obvious pieces of ‘satire’ you can imagine, is great value as the slimy producer.

If this weren’t part of a series on Jennifer Jason Leigh her participation in THE BIG PICTURE would hardly rate a mention. She’s on screen for perhaps five minutes in total, and has very little to do. That said, she’s clearly having a good time and even with very little to work with she manages to give Lydia a real identity, and a very particular nervous energy; she moves like she’s being repeatedly electrocuted. It’s not much, I’d really like to see what she could do in one of Guest’s improvised films, but here she’s one of the better and funnier things in what is a disappointing film. 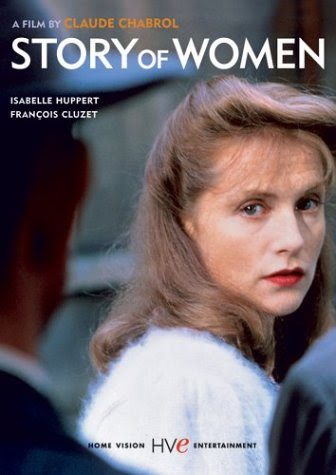 The English language title for this film, A STORY OF WOMEN, may fit it to a certain degree, but what it doesn’t capture is the implication in the original title (explicitly stated in the film) that what its central character, Marie Latour (Huppert) does is essentially a woman’s affair, women’s business.

The film is set in the midst of the second world war, with France occupied and ruled by the Vichy government. As the film begins we find Marie and her two young children living in poverty, but an opportunity comes when Marie’s neighbour asks for help aborting her pregnancy. When the neighbour pays by giving Marie a record player she seems to see the opportunity, and to become determined that she, her children and her wounded husband will begin living better, war or no war. She begins offering further abortions, and letting a room in her house to Lulu (Trintignant), a friend, and one of the local prostitutes. Marie Latour is based on Marie Louise Giraud, who was one of the last women in France to be executed by guillotine.

Though its title is plural A STORY OF WOMEN is overwhelmingly the story of this one woman, of her attempt to keep her family (or at least her children, she shuns her returning husband) in some comfort and, equally, of her intoxication at being able to live well when so many weren’t. Marie isn’t a sympathetic character, Huppert plays her as opportunistic, an emotionally neglectful wife and mother, and not a little manipulative, but while it’s hard to feel for her you do understand her. You see the desperate poverty of the opening (in which she’s raggedly dressed and she and her children pick nettles for a very thin soup) and you can understand why, when she gets a little glimpse of what material goods and money can do, especially in the times she’s living, she becomes somewhat drunk on it, and pursues it greedily.

It’s a challenging balancing act for Huppert (whose performance won her the Best Actress prize at the Venice Film Festival in 1988, and a Cesar nomination). She’s spectacular, she never courts sympathy for Marie and, as ever, she’s extremely effective when her character is at her coldest. She’s especially strong in a scene that draws a contrast between the two sides of her life; coldly and dispassionately handing a client over to her ‘trained assistant’ (actually her housekeeper) before becoming sunny and lively on joining her lover (Nils Tavernier) in the next room. Good as she is throughout, it is in the film’s last half hour that Huppert is truly extraordinary. Once Marie is arrested all her facades slip away, both the coldness with her clients and her husband and the freewheeling, flighty woman we see with her lover and with Lulu are gone. Huppert seems tiny in these late scenes, as if the simple act of stripping her of her makeup and hairdressing has shrunk her. She’s also more delicate than ever, this once hard woman, now seemingly made of porcelain. The sheer emotion that Huppert puts across in the scenes in prison and leading up to Marie’s execution will really stick with you, none more so, surely, than her final prayer; crying, she says “Hail Mary, full of shit”. It’s a moment that resonates long after the credits, as does the performance itself.

This is a slightly atypical effort from Claude Chabrol. It lacks the stylisation that marks much of his work, and though his clear fascination with women (and Huppert in particular) persists, few of his other trademarks make it into this film. However, it’s a lean work, with every scene cut right to the bone (many are played with just a couple of images or a handful of sentences) and an expectation that we are intelligent enough to fill in what isn’t explicitly stated. The great advantage of Chabrol’s choices here, which are much more observational than usual, is that he really lets us in to Marie Latour’s world. The period detail isn’t played up, but it’s convincing, and along with Huppert’s and the rest of the cast’s naturalistic performances (Francois Cluzet is especially good as Marie’s frustrated husband) he allows us to forget that we’re watching a film and instead become invested in this woman’s journey to its bitter end. He does put in a little explicit social commentary, having Marie ask of her ‘crime’ “How could a man understand?” and dedicating the film to the children of the condemned (in a very odd late touch, that completely fails to work, he adds narration from Marie’s son, looking back as an adult at his Mother’s arrest and execution). But these are small things, and only the narration detracts (and then very briefly) from what is, overall, one of Chabrol’s and Huppert’s best efforts. This is a sadly underseen film, and well worth looking out.
Posted by Sam Inglis at 14:00