Why Isabelle Huppert? Of all the many hundreds of actresses out there, what makes her one of my two finalists when deciding who the greatest working actress is? Well, here are a few examples of the first thing that comes to mind…

In cinema, beauty is commonplace, even expected, especially in women. Even if you don’t think Isabelle Huppert is beautiful (for the record, I certainly do, in fact I’d suggest hers is among the most beautiful faces ever to appear on the big screen) one thing you can’t deny is that her face is fascinating. It is fascinating because it shouldn’t work, but the mass of freckles, the angular structure, the slight bump in the nose, the small, slightly tired eyes and the downturned mouth somehow come together to form a face that is at once completely distinctive and striking, and yet plausibly ordinary, able to fit itself to almost any part be it the rural postmistress of LA CEREMONIE, a hooker in LOULOU or an uptight pianist with secret desires in THE PIANO TEACHER.

Her face is also one of the most expressive things in cinema. Actors often speak of training as honing their instrument (a little pretentious, granted, but go with it for a moment). Huppert’s face is her instrument, and like any virtuoso player she can get almost any register from it. She can open up and let us in, she can be completely walled off, she can gives us a glimpse of what’s going on under that façade, and yet plausibly hide it from the people sharing the screen with her or she can explode with emotion, even if the moment is totally silent.

It is certain, proven beyond doubt by a career that spans almost 40 years of theatre and film, that Isabelle Huppert has been and is a great actress, but the greatest contemporary actress? Over the next month I’ll be looking at at least ten films, some I’ve seen before, some for the first time to try and answer that question, and I’m starting in an unlikely place; Curtis Hanson’s 1987 neo-noir THE BEDROOM WINDOW, which finds Huppert working in English, opposite an unexpected co-star… Steve Guttenberg. Yes. Mahoney. Really. 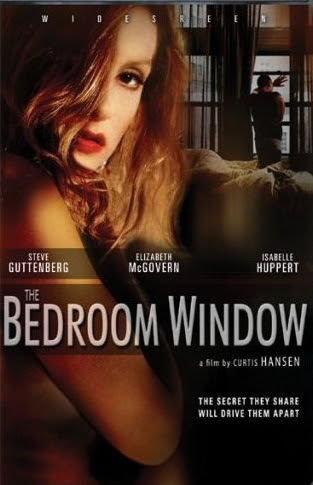 Looking at THE BEDROOM WINDOW as part of Isabelle Huppert’s career is perhaps the most interesting way to see this rather non-descript movie that is otherwise just one more not especially good generic 80’s thriller. The basic plot has Huppert’s character witness an assault while staying with her lover (Guttenberg, hilariously miscast), in order to keep their relationship secret from her husband (his boss) they report the incident to the police, after discovering that it may be connected to a murder, but say that Guttenberg was the witness. When the deception becomes obvious in court Guttenberg finds himself the prime suspect for two murders.

THE BEDROOM WINDOW is an interesting example of just how badly an actor, even one as good as Isabelle Huppert, can be hobbled by circumstance. She’s great casting as the femme fatale, but she’s hamstrung by Curtis Hanson’s very stagy dialogue, by her own still slightly broken English and by the lumpen performance given by Steve Guttenberg (smirk still firmly in place between POLICE ACADEMY movies), which gives her little to play off. Credit to Huppert though, because as the movie runs on, she’s the one aspect that gets better. She gets more and more comfortable in her character’s skin as she becomes harder and colder, and by the hour mark she’s giving a performance a good deal better than the film deserves.

Unfortunately the rest of the film fails to engage. Guttenberg is flat out awful; he looks baffled much of the time (even when he’s not supposed to), clearly completely out of his depth here and imbues his performance with all the charisma of an end table. Elizabeth McGovern, as the assault victim, is better, and probably the most consistent performer here, but her efforts are also undone by the fact that the plot ends up reducing her character to bait in a very flat ending.

Hanson’s direction is uninspired at best and the uneven, often bored seeming, performances suggest a very loose grip on his cast. The visuals aren’t a great deal better; pedestrian outside the early sequence in which Huppert witnesses the key assault and one or two shots that nod rather explicitly to Hitchcock. THE BEDROOM WIMDOW isn’t a good film, but it is an interesting one as an Isabelle Huppert fan, it’s really the only true genre film she’s made, and suggests that she’s ill at ease when boxed in by such conventions.
Posted by Sam Inglis at 19:01