Film Review: The Girl Who Played With Fire

Steig Larsson’s Millennium trilogy of novels is a genuine phenomenon. Best sellers around the world, they have already inspired the Swedish film adaptations that are currently rolling out around the world, there is a US remake to come (with at least the first film to be directed by David Fincher) and the extended versions of the Swedish films, broadcast on television over there, are due to be released on UK DVD some time in 2011, and something tells me that this is really only the beginning. Away from the hoopla surrounding it though, and the growing talk suggesting an aggressive Oscar campaign for Noomi Rapace, how does this second film hold up?

Looking at THE GIRL WHO PLAYED WITH FIRE in isolation is a little unfair, because it’s really only the first half of a huge story told over two novels (it concludes in THE GIRL WHO KICKED THE HORNET’S NEST, the adaptation of which opens in late November) and that means that it suffers many of the problems of the middle film. It does, thankfully, have a beginning, because it doesn’t follow as directly from THE GIRL WITH THE DRAGON TATTOO as you might expect (though you’d do well to go in having seen the first film, because Lisbeth Salander’s (Rapace) financial situation in this one is set up there). What it does lack is a conclusion, rather than ending it just sort of… stops, but that’s really a function of the book, and it would be unfair to criticise director Daniel Alfredson on that point. Especially when there are so many other things worth criticising here.

Steig Larsson’s source novel is a huge and often digressive beast, prone, even more so than Dragon Tattoo, to political rants. It’s also very dense, an laden with plot and character. Following Dragon Tattoo, which massively reduced the novel into a sharp focus on its central strand to excellent effect, screenwriter Jonas Frykberg does a very mixed job here of consolidating the material. The narrative feels very scattered, and often under nourished, with a lot of side plots which were very important in the book only dabbled in here. I can understand why Frykberg and Alfredson want to retain threads like the two investigations; the one led by the Police and the one adopted by journalist Mikael Blomkvist (Nyqvist), into the three murders that Salander is suspected of, setting off the movie’s chain of events. The problem is that the Police investigation is so under explored that the cops become little more than briefly glimpsed expository props, shoved in more for convenience and fan service than any great plot or character purpose. This is very much the case with any story outside of the two main threads; Salander’s attempts to evade capture and find out who has framed her, and Blomkvist’s efforts to find Salander and discover the real killer of Salander’s guardian and a Millennium journalist and his girlfriend. There are also smart deletions, most notably the endless Salander on holiday sequence that opens the novel, delaying the start of the story proper until somewhere around page 200.

Whatever its strengths and weaknesses, THE GIRL WITH THE DRAGON TATTOO was genuinely cinematic, boasting some genuinely striking visuals and fine use of the very wide 2.35:1 format. The two sequels were originally made solely for Swedish television, and it shows. The picture is tighter (the 1.78:1 of most widescreen TV sets) and the whole movie just looks and feels flatter. The first film looked like cinema, this looks like telly on a big screen. Daniel Alfredson (brother of LET THE RIGHT ONE IN helmer Tomas) only finds a couple of really compelling images during the whole film (the most notable being Salander disguised in striking, stylised, make up). Overall he doesn’t make any glaring errors, it’s more that his directorial style feels very much like ‘insert tab A into slot B’. This is even felt in the performances, which, outside of the leads, have a bit of a rote quality this time out. 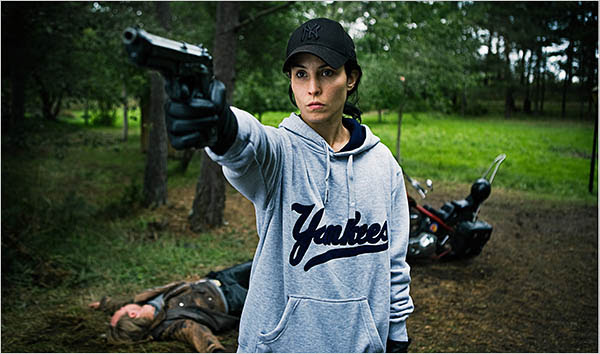 Some of these issues, especially those with the dangling sub-plot threads might well be addressed when we see the TV version of the film, which adds 56 minutes to the running time, deletions that are felt while watching the film. All this said, I don’t want to give the impression that THE GIRL WHO PLAYED WITH FIRE is terrible, indeed it moves at a great clip when it gets moving, and has several really stand out sequences. There’s a great fight scene involving boxer Paolo Roberto (who Larsson wrote into the novel without telling him, and who is in good enough shape to play himself), Micke Spreitz (playing a blonde killing machine who feels no pain, a role apparently offered to Dolph Lundgren) and Yasmine Garbi (who has a ferocious energy here and a tenderness in her scenes with Rapace, making her a great fit as Miriam Wu). There is also a moment, which differs from the book, in which Salander and Blomkvist briefly connect by virtual means, it’s a lovely change, and though it is brief the reactions from Rapace and Nyqvist in that moment speak volumes about their characters. However, the lions share of the great moments belong to Noomi Rapace’ indelible Salander. Whether she’s fighting two huge bikers, getting buried alive and then wreaking vengeance or calmly threatening people, she’s clearly one of the iconic characters in cinema already and every scene just re-confirms that.

Noomi Rapace IS this movie, every frame she's in she competely owns. There are other things to recommend it, certainly it is never dull, and there is able support from Nyqvist and, in a slightly expanded role, Lena Endre, but Rapace is reason enough to buy a ticket all by herself. She’s an incredibly intense actress, as Salander there’s always something going on behind her eyes, everything seems calculated. Rapace has little dialogue in this film, especially in the latter hour, but still her performance is full of texture. Watch as she sizes up her opponents before the fight scene with the bikers, the focus of her rage, but also the dispassion of it, and contrast that with the much more personal scene in which she threatens her guardian (Peter Andersson). Look too at the smile as she lets Blomkvist explore her apartment, or the tough but affectionate way that she talks to her lover Miriam Wu. All these tiny things add up, and slowly, inexorably, Rapace makes you believe in the existence of this young woman who, on the page, can read like a cross between a superhero and Larsson’s sexual fantasy. It is a brilliant piece of acting, and Rapace deserves to become a major, major star on the back of it. The question at this point is really whether she’s just too good for the shit Hollywood is serving.

It will be worth revisiting THE GIRL WHO PLAYED WITH FIRE in November, hopefully a few cinemas will double bill it with THE GIRL WHO KICKED THE HORNET’S NEST, because this is ultimately half a film. It’s not entirely successful, and considerably less impressive than its predecessor, but it stays afloat thanks to a whip cracking pace and another extraordinary performance from Noomi Rapace.
Posted by Sam Inglis at 16:47