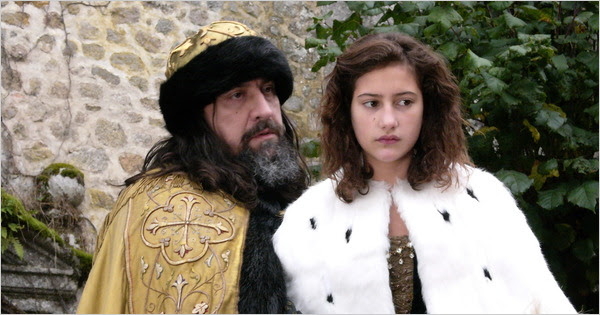 Catherine Breillat is not an easy director to get along with. The two previous films of hers that I’ve seen; Fat Girl and Romance, are both pretentious, often extremely dull and desperately trying to shock, and by reputation I can infer that much of her filmography is of a similar tone, especially her debut; A Real Young Girl, which had such censorship problem that it ended up unreleased for almost 20 years.

It seems that with Bluebeard (an adaptation of a much filmed fairytale about a young girl who marries a rich man all of whose previous wives have gone missing, presumed dead, a year after their nuptials). Breillat has mellowed. There is little here to suggest the controversy magnet of old (though the film does have a profoundly sexual undertone) and rather than long, pretentious dialogues during sexual encounters most of the storytelling here is presented through the gorgeous visuals. The period is a little uncertain, but it seems roughly medieval. Rather than be entirely wedded to period detail, Breillat goes for a more impressionistic approach, creating shots that are as much about artistic tableau as they are storytelling.

This choice may be a function of the structure, which has the story being read by two young sisters (Lopes-Benites and Giovannetti) who often disagree and argue about the details of the story. There’s a definite feeling that what we’re watching in the bulk of the film is not so much the fairy tale as it is written, but as it is told by these two children. Unfortunately, Breillat doesn’t carry this idea as far as it could go, the children argue about the story, but the telling doesn’t seem to be hugely affected by their disagreements (as it was, for instance, in The Princess Bride). Breillat also seems a little unsure of how involved the children are in the story. In one key moment one of the young sisters appears in the Bluebeard story, an intriguing idea, but one that is never raised again and seems to have little purpose.

The Bluebeard story is the centre of the film, and that too revolves around two sisters, teenagers this time; Marie-Catherine (Créton) and Anne (Baiwir), when their Father dies they are kicked out of their convent school because the fees can no longer be paid, but soon Bluebeard (Thomas) comes calling. Despite his reputation and his ugliness 14-year-old Marie-Catherine seems unafraid and agrees to marry him. There is only one room in their castle that she is not allowed to enter, but soon her curiosity gets the better of her and there are dire consequences. Marie-Catherine is clearly on the cusp of womanhood physically, but she’s much more grown up as a person than her older sister. Lola Créton, in a beautifully understated performance that promises much for her later work, gives Marie-Catherine steel and guts, and a manipulative streak a mile wide (see how she explains to her returning husband the party she has had in his absence) but she also keeps just enough of the impression that Marie-Catherine is, after all, just a child out of her depth.

Créton is the centre of the film, and by far the stand out performer, but the imposing Dominique Thomas can hardly fail to make an impression. Next to the delicate Créton his size is made to seem even more vast and hulking, and yet for much of the film there’s an unexpected gentleness to him (especially given that he’s a serial killer).

The film’s stand out passage is its ending, in which Breillat strips the final moments down to the barest possible essentials, telling what would in another film be at least five minutes of story in just a handful of still shots. It is perhaps an attempt to replicate the idea of an illustrated book, but whatever the intent the images serve their purpose beautifully, wrapping up the story in sharp and satisfying fashion. At just 80 minutes Bluebeard feels almost abrupt, it’s easily Breillat’s most accessible and enjoyable film and if nothing else the imagery and Lola Créton will probably stick in your mind long after the credits roll.
Posted by Sam Inglis at 12:22