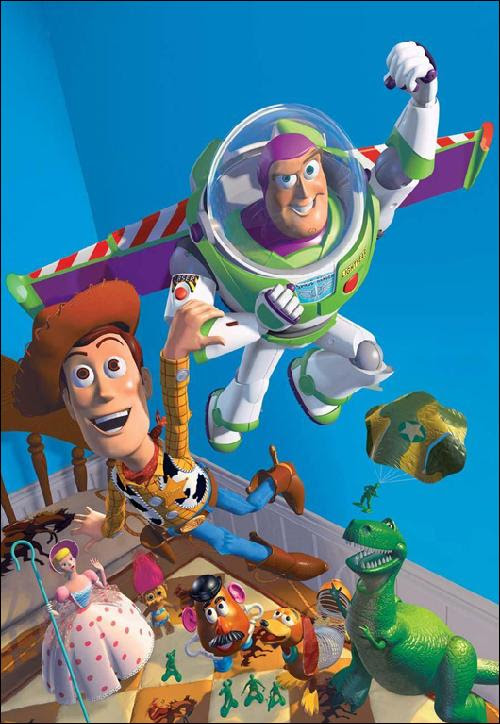 Why is it on the list?
When Toy Story opened in 1995, cinema had just passed its 100th birthday. Since that time there had been numerous advances in the field, but this, for the first time in a very long time, felt like something very different, something huge, something that perhaps, in its scant 80 minute running time, had just invented an art form.

I saw Toy Story before any of my friends, in a small local cinema on a preview the weekend before its opening. I can’t tell you how exciting it was, and how the next week it was bursting out of me at school about what an unvarnished delight this film was. At 14 I probably should have been growing out of Disney movies, being cynical about how they’re for kids, and girls, but Toy Story swept me up right from its first frames. It seems to do that to everybody, and that’s largely because the premise is so relatable, seriously, what kid hasn’t wondered what his toys get up to when he’s not around? Setting the tone for Pixar’s subsequent work, Toy Story also has another level, one designed more to engage adults; Favourite toy Woody (voiced by Tom Hanks) is threatened when flashy ‘Space Ranger’ Buzz Lightyear (a perfectly arrogant Tim Allen) threatens to become his owner Andy’s NEW favourite, it’s that same workplace rivalry that we all have likely experienced at some time, it’s that anxiety over a new person in a friend or partner’s life, all articulated through a cowboy doll and a deluded action figure who thinks he’s a spaceman.

A film like this can be as clever as it likes, but if the story and characters don’t engage, then it’s all for nothing. Fortunately the story; a simple but exciting buddy movie in which Woody and Buzz have to escape the house of a neighbour who tortures toys and get back to Andy before he and his mother move house, works very well, with barely a wasted frame. It’s beautifully paced, with ample character beats, but never allowing itself to get bogged down.

What really makes Toy Story extraordinary though is the characters. The writing and performance of every single character is pitch perfect. They all feel like real people, more three-dimensional than any blockbuster lead of the last few years. Tom Hanks provides a solid anchor as Woody, trading on his all American Jimmy Stewart like charm, which makes it all the funnier and all the more resonant when his resentment of Buzz spills over into fits of pique. Tim Allen steals the show though, and is so hilariously funny as the deluded Buzz that the filmmakers have had to find a way of working that naïve character who doesn’t know he’s a toy into both sequels. Allen also demonstrates dramatic chops here though, something he’s seldom been allowed to do outside these films. The scenes when Buzz discovers what he is are beautifully acted, and you really feel for the character - an action figure, remember - in these moments.

Around Woody and Buzz there’s a great cast of supporting characters. A few personal favourites include Rex the neurotic dinosaur toy (given pitch perfect voice by Wallace Shawn), The army men, led by R. Lee Ermey, Annie Potts’ slightly naughty Bo Peep (“Whaddaya say I get someone else to watch the sheep tonight?”) and Pixar lucky charm John Ratzenburger as Hamm the piggy bank. As well as each character works in their own right it’s the way that the script explores their relationships to one another, really knits them into an inter-dependent community, that gives these figures of pixels and polygons heart, soul and makes us empathise with them.

The tone of the film takes in everything from buddy comedy to thrilling action scenes to an undertone of horror when Woody and Buzz are trapped in Sid’s room, but it all melds beautifully and Pixar’s animators and director John Lassetter execute every scene perfectly in and of itself, while also tying them together into a cohesive and totally, joyously, satisfying whole. Toy Story was, and remains, resonant, intelligent and deeply moving, but most importantly it is a truly great entertainment; pacy, and packed to the gills with fall on the floor funny moments both visual and verbal.

It is both a defining film of the 90’s and perhaps the single most influential of that decade (honestly, name me one American animated film since that doesn’t owe this one a debt), but unlike many of the films that have changed the artform, this one remains as wonderfully watchable as the day it was released. 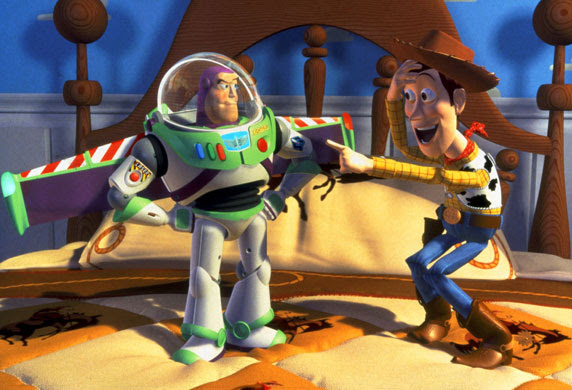 The gas station
From Woody’s affecting despair (“I’m a lost toy”) to his hilarious row with Buzz, this scene comes close to encapsulating the appeal of the film.

The CLAW
Okay, so the three eyed aliens are a one joke item, but that joke is hilarious.


Memorable Lines
Buzz: Sheriff, this is no time to panic.
Woody: This is a perfect time to panic! I'm lost, Andy is gone, they're gonna move to their new house in two days, AND IT'S ALL YOUR FAULT!
Buzz: Mine? My fault? If you hadn't pushed me out of the window in the first place...
Woody: Oh yeah? Well, if you hadn't shown up with your stupid little cardboard spaceship and taken away everything that was important to me...
Buzz: Don't talk to me about importance! Because of *you*, the future of this entire universe is in jeopardy!
Woody: WHAT? WHAT ARE YOU TALKING ABOUT?
Buzz: Right now, poised at the edge of the galaxy, Emperor Zurg has been secretly building a weapon with the destructive capacity to annihilate an entire planet! I alone have information that reveals this weapon's only weakness. And *you*, my friend, are responsible for delaying my rendezvous with Star Command!
Woody: [pauses and looks incredulous] YOU! ARE! A! TOYYYYY! You aren't the real Buzz Lightyear! You're - you're an action figure!
[holds hand up to eyes indicating something small]
Woody: You are a child's play thing!
Buzz: You are a sad, strange little man, and you have my pity.

Woody: Tuesday night's plastic corrosion awareness meeting, was I think, a big success. We'd like to thank Mr. Spell for putting that on for us, thank you Mr. Spell...
Mr. Spell: [mechanically] You're. Welcome.