Why is it on the list?
Okay, so I can’t claim Police Story as great art, but I certainly can claim it as great fun, and that means more than you might think sometimes. There’s an interesting tale behind Police Story. It came out of Jackie Chan’s frustrating experience on his second attempt to break the US market; The Protector, in which he was hilariously miscast as a tough cop, closer to Dirty Harry than Drunken Master (it’s also just weird hearing Jackie say fuck). Disappointed with that film, and with the fact that it bellyflopped both at the US and Hong Kong box office, Jackie set out to make a cop movie with martial arts action, but one that would be made on his terms. The result? A franchise launching masterpiece and one of the most entertaining martial arts films ever made.

The story, should we wish to dignify it with the description, sees Jackie getting into comic scrapes while protecting a reluctant mob witness (played by his sister in law, Brigitte Lin Ching-hsia) and combining his job with a mishap prone romance (with a very young Maggie Cheung). But as with all of Jackie’s movies, it’s not really the story that matters so much as it is the energy and the set pieces. On those terms Police Story is his finest hour. The action is impeccable, and the film brilliantly paced. Many martial arts films tread water for an hour before going all out in their last 25 minutes with a colossal action set piece, but Police Story spreads out the action, from giant stunt set pieces to the incidental moments (perhaps my favourite stunt in the film is a simple leap over a high gate, the pure grace with which Jackie does it is just wonderful to see).

In one of the most audacious set pieces Jackie clings on to the side of a moving bus, hanging from an umbrella. Like all of the film’s stunts this is done by Jackie and for real (albeit with an umbrella with a strengthened steel handle) and it looks genuinely perilous, especially when people inside the bus start attacking him. This very real peril just heightens both the excitement and the sheer bloody amazement as you watch the sequence.

As a physical comedian, Chan draws much from silent clowns like Chaplin and Keaton, and here there’s a vintage set piece in which he tangles himself in several phone cords while juggling calls at police headquarters, and the third (and perhaps most important) physical aspect of the film is also brilliantly executed, with the fights, especially a comic fight with stuntman Mars and the many in the film’s astounding mall set finale, among Jackie’s best work.

That finale is an astonishing 20 minutes, the several months of filming on it caused the stunt team to dub the film Glass Story, due to the sheer amount of stunts that had both stuntmen and actors (including both Lin and Cheung) thrown through double thickness sugar glass. It culminates in one of Chan’s most lunatic stunts, which is saying a great deal, as he slides down a pole at least two storeys long, lined with lightbulbs which pop as he goes. He burned the skin off both hands, almost broke two vertebrae (narrowly avoiding paralysis), and dislocated his pelvis. The thing is, the pain (and the outtakes show much of it) was worthwhile. Police Story is one of the greatest films of its kind, a crowning achievement for Jackie Chan as stuntman and especially as director. 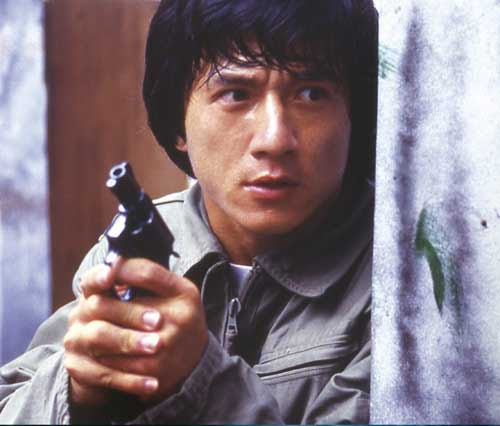 Glass Story
A mayhem filled last 20 minutes, packed with strong fights (a great one with Dick Wei) and amazing stunt work all round.
Posted by Sam Inglis at 21:34