François Ozon is a genius. There are quite simply no two ways about it. He’s also the single most consistent filmmaker working, with a non-stop run of great films stretching from his debut (1998’s Sitcom) to Le Refuge (to be fair, I haven’t seen his previous film; Ricky yet, as it has yet to be released in the UK, though it’s coming to DVD here soon). Even for a serial genre hopper like Ozon, Le Refuge, though it’s the third part in a very loose trilogy on mourning (which also includes Under the Sand and Time to Leave), feels like a real departure. It’s a strikingly intimate film, free from the melodrama that Ozon likes, and does so very well.

The story is of a young woman named Mousse (Carre), a heroin addict whose boyfriend (Melvil Popaud) dies of an overdose just after she has become pregnant. To see herself through both pregnancy and a methadone aided recovery she takes off to a beach house owned by a friend, where her boyfriend’s brother Paul (Choisy) soon joins her.

Le Refuge came out of Ozon’s desire to make a film with an actress who was genuinely pregnant. We’ve all seen a lot of pregnancy movies, we all know the beats; the morning sickness scene, the wacky cravings, the mid-pregnancy scare, the birth, with some poor sweaty actress grunting and everyone yelling “PUSH”, while some male figure stands on the sidelines and quite often faints. Ozon, ever resistant to cliché, gives us precisely none of those beats. That’s perhaps because Mousse never seems to want a baby, she rather wants her boyfriend Louis to remain in the world in some small way, and this is how she’s making it happen. We also know all the beats of a drug movie, but again Ozon avoids them, keeping Mousse’ struggle with addiction in the background, letting us see it through the character’s actions, demeanour and the way Carre plays her.

Isabelle Carre is an exceptional actress (see, for starters, her mesmerising performance in Anna M) and she’s spectacular as Mousse. It seems an intensely personal piece of work, especially as Ozon scrutinises her body, bump included, in extremely intimate close up. One especially great scene has her lying in the bath, simply running her hands across her belly. There’s no dialogue, but Carre communicates so much in that sequence. Many of her best moments are silent; like the way she asks a man who tries to seduce her just to rock her, and the comfort she takes in it, like the way she steps away from a boy she’s dancing with at a club when he puts his hands on her belly, like the way she reacts to Paul singing and playing the piano, with so many different emotions registering on her face. It’s a masterclass in doing a huge amount with very little. There’s also just something about Carre, her slightly gap toothed but explosive smile perhaps, that just makes you warm to her. It’s an important quality, because Mousse isn’t easy to like or to root for, but Carre embodies her so completely and brings that vital empathy to her protrayl. 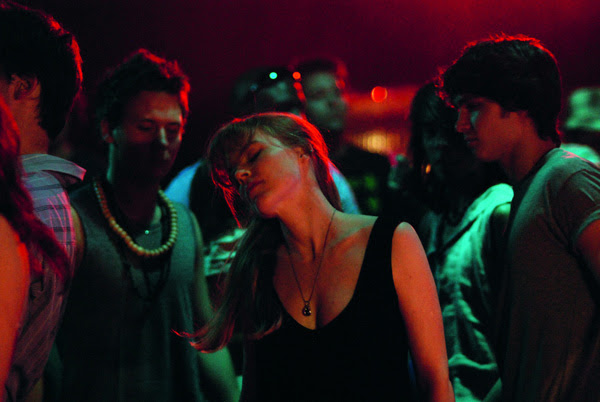 Next to the experienced Carre, Ozon has cast a singer, Louis-Ronan Choisy, who had never previously acted. You’d never guess. Like Carre’s, Choisy’s performance is completely unaffected and completely resistant to cliché. They’re a strong pairing too, with the chemistry working well and a connection between them seeming to grow very organically. Choisy also wrote the film’s music, built largely around the tune of the song Paul plays and sings for Mousse. The score is well used; accentuating the emotion of key moments rather than instructing you how to feel.

There are many typically Ozon moments in the film; notably the many beach scenes, which have featured in the director’s work all the way back to his early shorts, and are a recurring image in the mourning trilogy. The look is also very identifiably Ozon; there’s a slight softness to his light which gives much of the midsection of the film, again especially the beach scenes, a slightly dreamlike glow, perhaps to signify the way that Mousse, through her recovery, is coming back into the light from the grimy grey flat in which the first few scenes take place. What’s new in his approach here is the apparent lack of any real need to impose a plot on the film, he simply allows us to spend time with Mousse and Paul, to eavesdrop on this time in their lives a little. It’s not a hugely eventful film, obviously, but the strength of the performances means that even though almost nothing really happens Le Refuge remains absolutely riveting.

The ending is somehow both inevitable and shocking. In typical style Ozon refuses to put a neat little bow on things (in some ways the ending here is an interesting inversion of the ending of See the Sea, his magnificent short feature). That will annoy some people, as will the actions of Mousse, but such is life; this is a film that acknowledges the messy nature of life and personal relationships. I’ll need to see it again before I can really place it among Ozon’s work, but right now it feels like his best since 5 X 2, and certainly his most affecting film since then. I can’t really encourage you enough to go and see this film when it opens in the UK in August, it’s yet another masterpiece from one of the greatest filmmakers currently working.


I first Saw Leaving at the 2009 London Film Festival. This is simply a re-publishing of the review I wrote at that time, because my opinions on the film didn't chage with a rewatch.

Though she’s flirted with the mainstream, and had large roles in such popular fare as Four Weddings and a Funeral and The English Patient when you mention the name Kristin Scott-Thomas you’ll mostly see blank faces staring back at you. That’s a terrible shame, because she’s among the best actresses working in world cinema.

Like last year’s I've Loved You So Long, Catherine Corsini’s film finds Scott-Thomas acting in flawless French. As Suzanne, an English woman married for some 20 years to Samuel (Attal), but now embarking on an affair with Spanish builder Ivan (Lopez), leading to a messy and bitter divorce, Scott-Thomas is just brilliant. Her dialogue is beautifully delivered, and filled with expression and meaning. This, of course, is an actor’s job, but so frequently when they are working in a second language their performances can seem rote and bereft of expression, that’s absolutely not the case with Kristin Scott-Thomas. That isn’t all that makes her performance special though. Great actors are great listeners, and when you watch her reacting to what other people say there is such richness, such emotion in her silent reactions. This is a performance played as much in the physicality of its relationships and in what plays behind the eyes as it is in the dialogue, and that’s what makes it truly special, a real, three-dimensional portrait.

I’ve seen Sergi Lopez act in three languages now; his native Spanish, French and English, and in each he’s been outstanding. He’s an actor who seems to change completely in each role. It’s genuinely difficult to connect Ivan with Capitain Vidal from Pan's Labyrinth, or with Harry from Harry, He’s Here to Help. Lopez has often played bad guys in the past, but though Ivan is an ex-con (we never discover what he did) he’s no villain. Instead Lopez plays him as a very genuine, very normal man, largely driven by circumstance - that circumstance being that he and Suzanne have fallen in love. It’s tough to play very ordinary people, because they don’t tend to have the operatic notes that it’s rather easy to reach in acting. Instead roles and films like this demand smallness, subtlety and intricacy, and Lopez delivers beautifully.

These two outstanding performances tower over the film, and that’s probably a good thing, because frankly Catherine Corsini’s screenplay and direction, though there’s nothing wrong with them, are pretty generic. We’ve seen this tale told a thousand times, and we know pretty well where it’s going to end up (though Corsini doesn’t help that with a structure that opens proceedings with a moment that takes place about five minutes from the end of the film).

Scott-Thomas and Lopez also threaten to drown out Yvan Attal’s performance. Samuel isn’t as well written as Suzanne and Ivan, and Attal ends up having to spend most of the film playing a single note. He does it well, but the character is just too thin to really register. However, when the focus is on Suzanne and Ivan, as it is for much of the 85 minute running time, Leaving is strong stuff. The chemistry between Scott-Thomas and Lopez is electric; their sex scenes pulse with energy, and whenever they share a scene once their relationship has begun you can feel that hunger for one another, especially in Scott-Thomas’ last few scenes in the film.

Leaving certainly isn’t perfect, but it’s pretty well made on the whole, and though it is short it doesn’t feel compromised by its length. The characters are strong and individual (even if Samuel isn’t the most rounded of characters) and the ending is near perfect, leaving us on a note of some ambiguity, rather than spoon-feeding us for an extra 10 minutes. The film is only really lifted out of the ordinary by the two leading performances, make no mistake though, those two performances make Leaving a must see.
Posted by Sam Inglis at 16:08