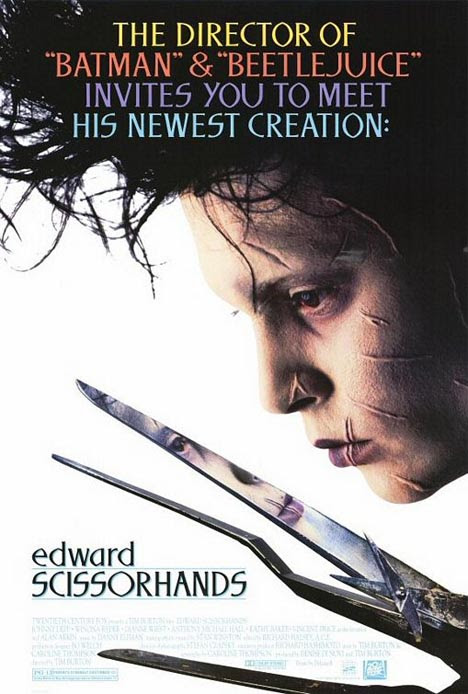 WHY IS IT ON THE LIST?
I first saw Edward Scissorhands when it was released in the UK, when I was nine, but I didn’t really fall in love with it for some time, in fact, at the time, I probably liked the Teenage Mutant Ninja Turtles movie more. Kids are stupid.

Over the years I’ve grown to like Edward Scissorhands more and more, and see more in it every time I watch it. On the one hand it’s a romantic fairy tale, the kind of impossible love story between this otherworldly creature (Edward, played by an exceptional Johnny Depp) and a normal girl (Winona Ryder in a blonde wig as Kim), the sort of thing that seems custom designed to appeal to young girls (and saps like me, I’ll admit it). On the other hand, because this is a Tim Burton film, there is gothic horror, in both the design of the film and Edward’s status as a ‘monster’ and a fair smattering of satire, with the director taking a sideways look at suburbia through Edward, and skewering it rather beautifully.

Burton creates two very separate worlds; Edward’s gothic mansion, like something out of a Hammer film, where his ‘Father’ (Vincent Price, touching in his final role) made him, set against the pastel coloured suburban street where Peg Boggs (Dianne Weist), an Avon lady who, on meeting Edward, essentially adopts him lives. It’s a lovely contrast, and makes for a lot of fun scenes as Edward finds his talents for hairdressing and topiary accepted, and becomes more and more a part of that middle class world.

This was Tim Burton and Johnny Depp’s first collaboration, and both are very near their best here. Depp gives an extremely sensitive performance as Edward, whose quiet voice and almost diffident manner are cleverly set against his appearance. As in the much less successful Benny and Joon, Depp draws on silent movie acting in this role, never making his gestures overly broad, but conveying a great deal with the way he manipulates Edward’s scissors and with his body.

Edward Scissorhands is an enchanting fairytale, beautifully captured by Tim Burton, and suitable for children of all ages.

STANDOUT SCENES
Show and tell
Peg’s 12 year old son takes Edward to show and tell at his school in a funny scene showing how Edward begins to bond with people.

Snow angel
Edward carves an angel from a block of ice, Kim dances in the ‘snow’ that falls as he works. Still the single most beautiful image Burton has put to film.

MEMORABLE LINES
Kim: You see, before he came down here, it never snowed. And afterwards, it did. If he weren't up there now... I don't think it would be snowing. Sometimes you can still catch me dancing in it.