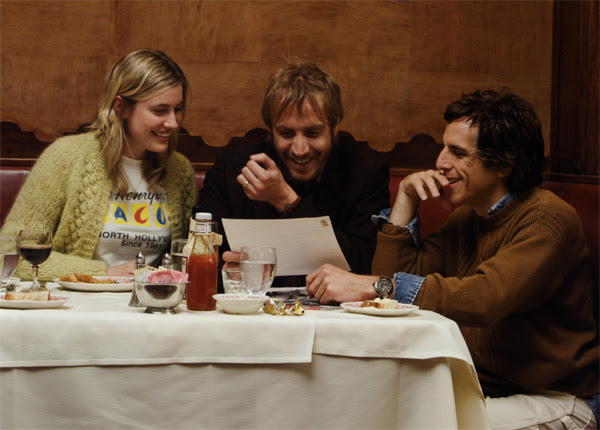 Roger Greenberg (Stiller) is a cunt. There’s really no arguing the point, he’s a raging asshole who I would cross the street or leave a party to avoid, and that completely undermined Noah Baumbach’s latest directorial effort for me, despite its several inarguable qualities.

The story (which Baumbach co-wrote with his wife Jennifer Jason Leigh) sees Greenberg, who has just been released from hospital after a nervous breakdown, staying at his brother’s house, looking after the dog while his brother and his family holiday in Vietnam. During the weeks that he’s staying in LA, Greenberg renews a friendship with Ivan (with whom he was in a band, until Greenberg’s dissatisfaction with the record contract they were offered broke them up) and forms a tentative relationship with his brother’s young assistant Florence (Gerwig). The problem is that I just don’t believe any of it. Especially the parts concerning Florence.

Gerwig, a pretty young woman who doesn’t quite fit the Hollywood ingénue cookie cutter, is terrific as Florence. She gives a wonderfully unaffected performance and by the end of her first scene you’re with her, you like her, and that’s why its frustrating that the screenplay seems to run so counter to the performance. Here’s this vibrant, intelligent, sweet young woman, there’s just no reason for her to put up with Greenberg, who consistently treats her with little disguised contempt, and I simply don’t believe that she’d have anything to do with him. There’s no incentive there. He’s 15 years older, doesn’t have a job, treats her like shit, outright tells her that he doesn’t like her and doesn’t want a relationship with her, oh, and he’s beginning to look like a fully made up Roddy McDowell in Planet of the Apes. Gerwig tries hard here, but there’s just no way to buy into the relationship. When she says to Greenberg “You like me so much more than you think you do” I thought, well, maybe, but why the blue fuck do you care? He’s a wanker.

Ben Stiller isn’t the problem. Point of fact he’s excellent as Greenberg, it’s unquestionably his finest performance to date. If anything he’s too successful, he makes Greenberg so misanthropic, such an irredeemable piece of shit, that when the film does want to move the character on a little bit, perhaps give you a little sympathy for him and make it seem like he’s changing, it doesn’t work. Stiller and the screenplay have created such a complete impression of this awful, awful man that you don’t believe that he’s really changing, and nor do you care. I just wanted the film to end so I could be rid of him.

For a critically lauded filmmaker, Baumbach is disappointingly one note. This is the third film on the trot in which he’s had essentially the same misanthropic main character; Jeff Daniels in The Squid and the Whale, Nicole Kidman in Margot at the Wedding and now Ben Stller’s Greenberg. It’s becoming clear that Baumbach is something of a one trick pony, and his one trick is wearing dangerously thin at this point.

Greenberg is so much the focus of the film that aside from Florence only one supporting character is really developed. Rhys Ifans steals the film as Ivan, his melancholic character is genuinely affecting and the layers that Ifans plays, the way he lets you see just how every callous, careless, thing Greenberg says and does wounds him, make him the film’s one truly rounded character. I was so much more interested in Florence and Ivan than I was Greenberg, the film might have been a great deal more interesting (certainly it would be more bearable) if it were about those two characters, with Greenberg a more peripheral figure. If I weren’t a huge fan it would barely be worth mentioning Jennifer Jason Leigh’s role, despite her high billing. She has two scenes, perhaps four minutes of screentime, and her character (an ex of Greenberg’s) is underdeveloped, but she is customarily brilliant, the actress as invisible as ever.

That’s the frustration of this film, aside from a couple of stray boom mikes there’s nothing technically wrong with it, and the performances are excellent all round. It’s just that the Greenberg character is so vile that I don’t care about him, nor do I believe anyone in the movie does.
Posted by Sam Inglis at 12:51