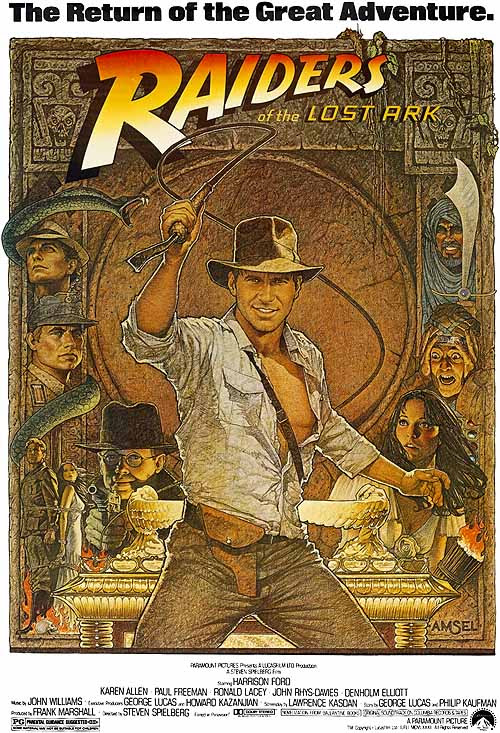 WHY IS IT ON THE LIST?
Why do you think? The first film in the Indiana Jones series is a near perfectly formed entertainment. It has it all. There’s Harrison Ford’s unassailably cool, unflappable, but never invulnerable, hero Indiana Jones. There’s a group of hissable villains (“Nazis, I hate these guys”) led by an over the top but still pretty scary Ronald Lacey. There’s a gorgeous girl - Karen Allen as Marion Ravenwood - but she’s no damsel in distress, holding her own in fights and giving as good as she gets verbally. Oh, and there’s several of the best action sequences ever filmed too, which is nice.

In creating Indiana Jones, George Lucas wanted to recapture the thrill of the serials that used to play in front of movies before television became prevalent. With the aid of writer Lawrence Kasdan and director Steven Spielberg he comfortably exceeds his inspiration, draining most of the cheese from the serials and reducing them down into two lean, mean hours, while also finding time to develop characters and a proper, engaging story.

Harrison Ford isn’t the world’s most gifted or versatile actor, but as Indy he’s so perfectly cast that, despite the presence of screen tests showing other actors including original first choice Tom Selleck in the feature length documentary that accompanied the DVD release of the trilogy, it is impossible to imagine anyone else in the part. He doesn’t even really seem to be acting; indeed Indy barely feels like a character, you could believe that this guy is a real adventurer.

Among the rest of the cast Karen Allen and John Rhys Davies really stand out. Davies is a riot as Indy’s friend Sallah (a role written for Danny DeVito) and Allen is just enchanting as Marion. I’m still a bit in love with Marion Ravenwood, nearly a quarter of a century since first seeing the movie. Of course the fact that she’s so cool, funny, and capable helps, but if I’m honest it’s all about that smile, which, could we harness its power, could solve the world’s energy crisis in one fell swoop.

As much as the cast are great in their own right, it’s the chemistry between them that really makes the film play. Indy and Marion are a brilliant couple; their squabbles are funny, but their attraction is believable too, especially in the lovely scene in which Marion kisses all of Indy’s many injuries better.

At the end of the day Raiders of the Lost Ark is a constant reminder that, yes, blockbuster entertainment can be tremendously good fun and relentlessly exciting while also being smart engaging. In fact, this film makes it look so easy that you wonder why so many filmmakers (including Spielberg himself) have in the last decade so comprehensively failed to capture this same magic. 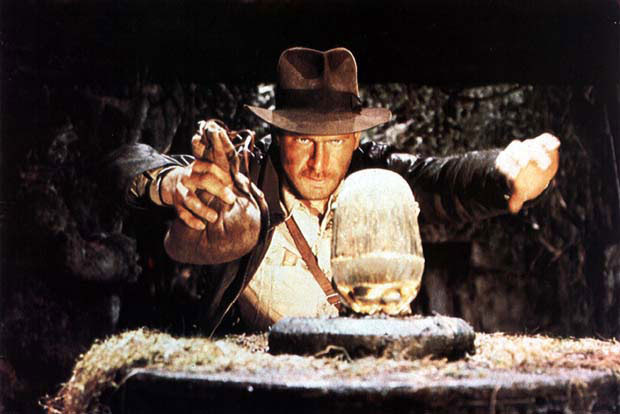 STANDOUT SCENES
So very, very many, but here’s just a few.

The swordsman
A case of the squits leads to one of the best visual jokes in cinema.

The truck
Directed by second unit helmer Michael Moore (not that one), this pretty much sets the standard for action set pieces. Genuinely dangerous looking and completely thrilling.


MEMORABLE LINES
Marion: You're not the man I knew ten years ago.
Indiana: It's not the years, honey, it's the mileage.

Indiana: Snakes. Why'd it have to be snakes?
Sallah: Asps... very dangerous. You go first.

Sallah: Oh, my friends! I'm so pleased you're not dead!

[Marion is being kidnapped]
Marion: You can't do this to me, I'm an AMERICAN.

Toht: You Americans, you're all the same. Always overdressing for the wrong occasions.