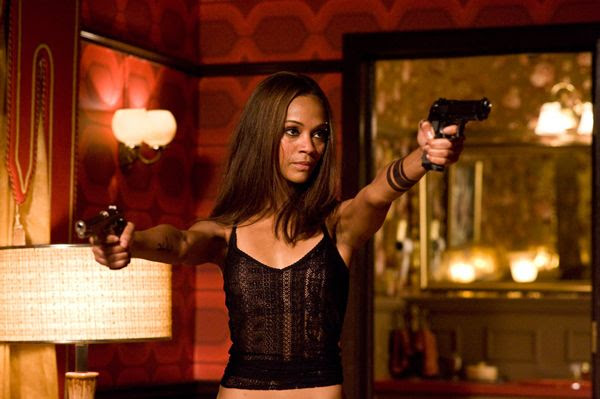 The Losers is a stupid movie. A very stupid movie. It’s overblown, the story barely holds together, the characters are all caricatures with names like Roque and Pooch. The villain is a hammy megalomaniac with an ill defined and fundamentally idiotic plan. Lots of things go boom. And by God it’s fun.

I can’t tell you that this movie is any good, Jeffrey Dean Morgan is a bit dull as (stop me if you’ve heard this one before) the head of a special forces team looking for revenge on the person who framed them for a war crime, and while the people surrounding him are having more evident fun you couldn’t really accuse any of them of acting per-se (except Jason Patric, but we’ll get to that). It doesn’t really matter though. Columbus Short and Chris Evans trot out their comic dialogue perfectly well, Saldana looks mouth wateringly lovely in a selection of skimpy costumes and Elba’s perfectly proficient as the jealous second in command to Morgan.

The action, despite some irritating staccato cutting, is solid when it’s allowed to flow, and it’s appropriately silly in scale, given that The Losers is paying homage to the overblown action epics of the 80’s. But one thing, all by itself, makes this film worth the price of admission, and that’s Jason Patric’s hilariously over the top performance as the lead bad guy, Max. His dialogue is deliciously silly, the sort of ridiculously evil things that Bond villains often say seriously, all of it played with a knowledge of how totally ridiculous what he’s saying is. Patric completely nails the tone, as do most of the cast, and the result is that The Losers is a fun little throwback. It won’t change lives, it won’t be the best, or even one of the twenty best, films you’ll see this year, but for 97 minutes it’s a pretty good laugh.

The great comedian Bill Hicks died tragically of pancreatic cancer at the age of just 32, just as it seemed, after 16 years on the road as a comic, his work was beginning to break out in America. Matt Harlock and Paul Thomas’ film is the first major documentary about him. Stylistically it’s interesting. Rather than a lot of talking heads the interviews (with childhood friends, fellow comics and family members) are used largely as audio, and set to animated images, which digitally manipulate hundreds of previously unseen photos of Hicks to try and create a flavour of the events the audio describes. It’s an interesting technique, and certainly more fun to look at than an endless succession of people talking to camera.

There are also plenty of Hicks clips, including lots from before he really became the Bill Hicks people know, the famous Outlaw comic whose jokes combined with social commentary in a style akin to preaching. As you’d expect, the film is both funny and, towards the end, very sad, as with everything that mentions Bill it closes on a note of promise not unfulfilled, but still never fully recognised. For newcomers this is a fine primer on a great comic and an interesting man, for fans there’s little new here, but the story is well told and the style is interesting and different.

The world is like a ride in an amusement park, and when you choose to go on it you think it's real because that's how powerful our minds are. The ride goes up and down, around and around, it has thrills and chills, and it's very brightly colored, and it's very loud, and it's fun for a while. Many people have been on the ride a long time, and they begin to wonder, "Hey, is this real, or is this just a ride?" And other people have remembered, and they come back to us and say, "Hey, don't worry; don't be afraid, ever, because this is just a ride."