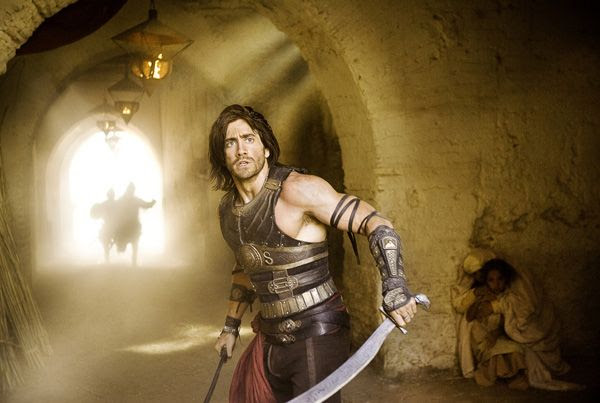 I haven’t played a computer game for any extended period of time in over a decade, and when I did play them I’m pretty sure I never encountered any of the Prince of Persia series, so I came to this film unencumbered by expectation, simply looking for a fun romp; some action, some comedy, a pretty girl to look at, a hissable villain, all in all a hundred minutes of pure blockbuster entertainment. It baffles me that in the last few years this mix, which used to seem so simple, has been so rarely got right. Prince of Persia: The Sands of Time, sadly, doesn’t buck the prevailing trend. It’s bunch of stuff in search of a reason to exist.

Let’s be clear, this isn’t an especially terrible film. It’s too dull to be really strikingly awful, it’s just non-descript in every possible way, it’s a mish mash of bits and pieces from other films, rammed together into what appears, more often than not, to be a rolling demo for a computer game. The – ahem – plot, revolves around Dastan (Gyllenhaal) who, as a child, is adopted by the King of Persia (apparently, it seems, because lobbing an apple at people who are chasing a child marks you for greatness). Anyway, he grows up to be a great fighter, and when he and his brothers invade a holy city he obtains a dagger that has the power to turn back time. Then Dastan’s father is murdered, and Dastan framed for the crime, which means he has to go on the run. He still has the dagger, so he’s followed both by baddies who want it and by Gemma Arterton, a princess sworn to protect it.

For me the great problem with Prince of Persia is in its central McGuffin. I can see how the dagger would work well in a game; giving you a second chance to do something important, rather than dying, but in a movie the equivalent of a portable cheat code has major drawbacks. The thing is that the function of the dagger is to undermine any real tension in the film, because you know that much of the time Dastan can just activate it and get out of his sticky situation, it also means that the character doesn’t have to do much in the way of problem solving; instead he can time travel his way out of a corner. Imagine if Indiana Jones was just allowed to rewind time, how much fun that wouldn’t be. It also means that you know pretty much exactly how the film is going to end, so nothing that happens during the course of it has any weight, there’s never any reason to care when someone dies, because it’s likely not to matter in the long run.

It doesn’t, of course, help, that the film’s screenplay is horrific. There are no characters, none whatsoever. Most of the people in this movie have absolutely no traits, let alone a personality, while leads Gyllenhaal and Arterton have to make do with one note each (he dashing, she stroppy). It’s the exposition that really weighs the film down though, the endless explaining of new characters, locations and things, all of it playing as if it’s been transcribed directly from the manual for the game (Level four: Infiltrating Avrat). It’s all just so crushingly, crushingly dull.

Throughout the film there are echoes of earlier, better, movies. The Indiana Jones films, the 1999 The Mummy, Pirates of the Caribbean (all of these are especially strongly evoked by Alfred Molina’s desperately unfunny comic relief character) and in the action, which is heavily parkour driven, it’s very easy to see the influence of the Bourne films and Daniel Craig’s Bond movies. It’s all well and good to have these elements, but you’ve got to weld them together into something, preferably something original, or at least something fun, but that’s beyond Newell and his screenwriters. The action is pretty awful. It looks exactly like somebody else is playing a computer game, and the constant, barely motivated, use of slow motion is a real irritant. Gyllenhaal has got into impressive shape here, but he’s no action star and ultimately the film’s fighting is neither spectacular nor involving enough to be interesting.

To give credit where due, Gyllenhaal has also worked hard on his English accent, and though it is overly broad it’s actually less fake sounding than Gemma Arterton’s, and she’s English. Unfortunately, and it’s not entirely the fault of the performers, the acting is wretched. Arterton, having impressed lately in The Disappearance of Alice Creed, is supremely irritating as Princess Tamina, and brings to the part all the personality of a lump of plywood. Gyllenhaal works hard, but he can’t overcome the screenplay, which gives him no character and appalling dialogue. The two of them are paired together in a completely insipid, unmotivated, love story, in which they exhibit all the natural chemistry of fire and water. Then there’s Ben Kingsley, who hams to high heaven as Gyllenhaal’s uncle, stinking up the screen in depressingly familiar fashion.

I didn’t quite hate Prince of Persia, but from its fundamental lack of drama, to the proficient but still oddly fake CGI, to the sense that I was watching not a movie but a computer game, there was nothing about it that I really enjoyed either. Within a week I will have forgotten it exists. I suggest you save yourself the intermediate step of seeing it.
Posted by Sam Inglis at 11:49