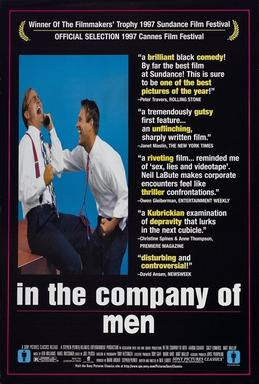 WHY IS IT ON THE LIST?
Neil LaBute’s debut, shot in just eleven days on a miniscule budget, is often seen as exhibit a in the case prosecution case casting the writer/director as cinema’s most extreme misogynist. If you’re one of the people who buys into that argument then, I’m sorry, but you’ve spectacularly missed the point.

The story sees Chad and Howard (Aaron Eckhart and Matt Malloy) two 30ish executives, both recently left by their respective girlfriends, decide to play a game on a business trip. Chad suggests that they find a vulnerable woman, and that they both begin to date her, make her fall for them, and then dump her in the cruellest way possible, as vengeance for all the times women have shit on them. He chooses Christine (Stacy Edwards) a pretty, deaf, temp in their office but as both men date her Christine begins to fall for Chad, and Howard begins to fall for Christine.

I have seen hundreds of violent films, films that deal with pain explicitly, films awash with blood, but despite that and the fact that not a single punch is thrown in its 93 minutes, not one drop of blood spilled, In the Company of Men may be the single most brutal film I’ve ever seen. Neil LaBute doesn’t spare you for a second, once ‘the game’ begins every line said by Chad (Eckhart debuting with a career performance) lands like a punch to the face. He’s so hateful, so completely evil, so unrepentant in his cruelty, that you can’t quite believe someone put him in a movie. The thing is, despite the fact that Chad is essentially Satan in a tailored shirt, LaBute’s screenplay is so brilliant, and Eckhart’s performance so matter of fact, that you absolutely believe that not only does Chad exist, there’s one of him in every office.

Even the sympathetic side of the central pair is pretty loathsome, Howard goes along with his friend’s plan, and seems to relish it to begin with. He may have some emotion, some soul that Chad appears to lack, but he never challenges Chad’s idea until long after it is too late. Malloy does a great job though, it would have been easy to play both these men as cartoons; Chad the strutting epitome of evil and Howard the nebbish type who can’t stand up to him. These things are what they’re playing, but the subtlety of both actors work means that they both feel like frighteningly real people, not like mouthpieces.

There’s also a lovely (and technically remarkable) performance by Stacy Edwards as Christine. She’s the only sympathetic, perhaps even the only truly human, character in the film, and Edwards plays her with a simple decency that radiates off the screen, and makes the dénouement even more devastating than it would otherwise have been.

There’s nothing flashy about In the Company of Men. It takes place largely indoors, often in very drab, basic rooms, and the camerawork is unobtrusive. All of which allows the dialogue to be the focus, and that is to the film’s great advantage, because every line is razor sharp. This isn’t, strictly speaking, a horror film, but because it is so believable, because Chad is so completely plausible and because there’s never a single hint that he learns anything, In the Company of Men is one of the scariest and most disturbing films I know. It’s funny, in an extremely black fashion, but it’s the way that the film just crawls under your skin that really makes it stand out.

To return to the beginning, if you think that, as a film, In the Company of Men is misogynistic, that means you think the film sides with Chad. First off, I don’t see how you could possibly take that from it, but more importantly, I think that says that YOU side with Chad. In which case, fuck you.

STANDOUT SCENES
“Let’s hurt somebody”
The finalising of Chad’s plan and his statement of his one, horrifying, objective.

“I hate that dude”
The depths of Chad’s misanthropy revealed as he goes through a company brochure, pointing out to his co-workers all the people he hates.

“Because I could”
Final proof, if proof were needed, that Chad is the devil.

MEMORABLE LINES
Chad: Women. Nice ones, the most frigid of the race, it doesn't matter in the end. Inside they're all the same meat and gristle and hatred just simmering.

Chad: Fuck her! Let's get a sandwich!

Chad: No matter what happens after it - jumped over for promotions, wife runs off with some biochemist, who knows what.... But we would always have this thing to fall back on. We could always say, "Yeah, fine, but they never got me like we got her."

To buy the movie, and help out 24FPS at the same time, please use the links below. Thanks!
USA: DVD
Posted by Sam Inglis at 17:01