WHY IS IT ON THE LIST?
eXistenZ is the most underrated film in the long career of the body-horror master. In many ways this film (Cronenberg’s last, to date, with a self-penned screenplay) is a restatement and updating of themes, first explored in 1983’s Videodrome, of the way media (in this case an immersive virtual reality computer game) affects people’s minds and bodies.

Jennifer Jason Leigh stars as auteur game designer Allegra Gellar, who is premiering her latest game; eXistenZ and playing it with a select group of fans, however, she’s attacked at the event and, finding herself on the run with security guard Ted Pikul (Jude Law), she has to find a place to plug in to her game (though a ‘bioport’ at the base of the player’s spine) and ensure that it hasn’t been damaged. This is, to date, the last of Cronenberg’s seminal body horror films, and as with the likes of Dead Ringers, The Brood and Rabid before it eXistenZ explores issues of identity (we never really know if Gellar and Pikul are who they believe they are), sexuality (immediately on entering eXistenZ Gellar and Pikul have a sexual encounter, and there is much sexual metaphor, particularly in Pikul’s fear of penetration), the fragility of our bodies (“what’s happening to them?”, wonders Pikul) and of course the question of reality (as the film goes on it becomes less and less clear exactly how much of it takes place in game).

This amount of complex, layered metaphor, sounds like it could bog a film down, but Cronenberg marshals it all brilliantly, letting the film’s commentary play as a background note for those who wish to plug into it, but also crafting a genuinely fascinating and often thrilling sci-fi movie. eXistenZ is certainly a cerebral film, but the audience really gets to set the terms as to how much they want to engage with its themes, and its enjoyable on whatever level you wish to engage with it.

It also helps, of course, that as his lead Cronenberg has the single most gifted actress of her generation. It’s a little bit of a departure for Leigh, anchoring a relatively large budgeted sci-fi movie, but she brings the same astonishing commitment as usual to playing Gellar. What’s really striking is her physicality, and how she subtly changes when she's in the game, becoming somewhat more confident, and very much more sexual, in her own domain. There’s also a strong supporting cast, Jude Law is okay as Pikul, but the cameo performances are a wonderful mix of character actors doing intriguingly oddball things; Willem Dafoe makes a particularly strong impression as ‘Gas’, but there are also turns by Don McKellar, Christopher Eccleston, Ian Holm and Sarah Polley to enjoy.

eXistenZ is a film that I’ve enjoyed more, and seen more layers in, every time I’ve watched it. Eleven years since I first saw it I’m still not entirely sure I understand it completely, and that’s part of the way it continues to pull me in. It’s a major, overlooked work, from one of the greatest working filmmakers. 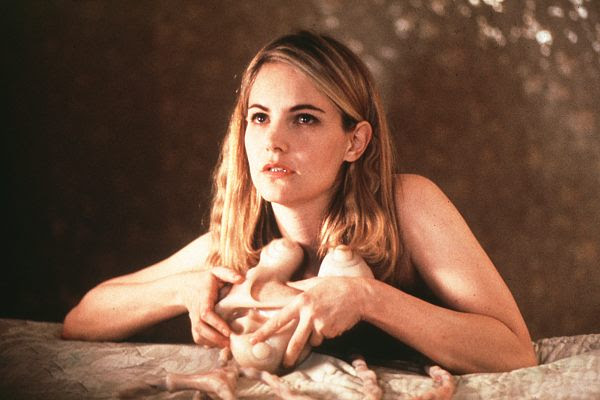 STANDOUT SCENES
Waiter, there’s something in my soup
Perhaps the most purely Cronenbergian moment in any of the director’s films; an ingenious concept, brilliantly executed.

“It’s a permenant hole into my body, won't it get infected?”
Jennifer Jason Leigh’s reaction to this line of Jude Law's is one of my favourite pieces of improvisation ever, one small, brilliant, gesture which is incredibly insightful about her character.

MEMORABLE LINES
Allegra: So how does it feel?
Ted: What?
Allegra: Your real life. The one you came back for.
Ted: It feels completely unreal.
Allegra: You're stuck now, aren't ya? You want to go back to the Chinese restaurant because there's nothing happening here. We're safe. It's boring.
Ted: It's worse than that. I'm not sure... I'm not sure here, where we are, is real at all. This feels like a game to me. And you, you're beginning to feel a bit like a game character.

Ted: What was your life like before?
Gas: Before?
Ted: Before it was changed by Allegra Geller.
Gas: I operated a gas station.
Ted: You still operate a gas station, don't you?
Gas: Only on the most pathetic level of reality.

To buy the movie, and help out 24FPS at the same time, please use the links below. Thanks!
UK: DVD
USA: DVD
Posted by Sam Inglis at 16:30