I’ve seen some sick, demented, shit over the course of watching something in excess of 7000 movies. I’ve ploughed my way through Cannibal Holocaust, The Toolbox Murders and many other video nasties. I’ve suffered the hopelessly inept likes of Date Movie and A Certain Sacrifice and I’ve somehow sat through the vomit inducingly offensive Pumpkin. And yet I still feel like The Hottie and the Nottie has reached a new low, a place so despicably terrible that it may scar me for life and should be supplied with not just a piracy warning but a health warning. I feel like I need to bathe in disinfectant to wash the stench away.

Hottie tells the story of Nate (Moore) who has been in love with Christabel (Hilton) since first grade, though he hasn’t seen her since then. Tracking her down to LA he finds that Christabel will only agree to date him if he agrees to find ‘someone special’ for her epically ugly best friend June (Lakin). Guess what happens.

It’s not so much the outline of the story, okay it’s generic, the same Pygmalion riff we’ve seen a million and six times, but it’s not actually offensive. It’s the way events play out that makes you want to scrub your eyes with a brillo pad. Here’s why; if The Hottie and the Nottie were a person it would be a jackbooted, armband sporting, sieg heiling Nazi. It’s an easy charge to make, and it’s been made (erroneously) in the past in reference to films like Starship Troopers and Fight Club but honestly, at times this feels less like a film than an advert for eugenics.

To finally get the man (as we all know she must) June’s inner beauty doesn’t come through, allowing Nate to see past her looks, no, instead she goes through an array of cosmetic surgery. The message of this movie isn’t that love is blind it’s that you MUST conform or you will go through life alone. Unconventionally attractive? FUCK YOU screams The Hottie and the Nottie, for in this world there is no such thing, you WILL fit the cookie cutter ideal of beauty or you will die a pathetic virgin.

Virginity is another thing that is demonised in this film, as much as sex is constantly idealised. Nate doesn’t seem to have any feelings for Christabel that emanate from above his groin. Nothing here indicates that he loves her, he merely wants to fuck her (something which she, classy, classy girl that she is, implies he’ll get to do the second he finds June that special someone) and rather than having a change of heart and deciding that, hey, that June might be the right girl for me he seems merely to look at her post-surgery and decide “Oh she’s hot now, perhaps I’d rather fuck her”.

The deeply suspect messages of the film continue in its treatment of alcohol. Christabel is constantly drinking, yet she never seems to suffer ill effects and all the characters seem to treat booze almost as medicinal. For a film that is clearly pitched at teenagers this is hugely irresponsible, it may as well flash up cards saying, “Drink. Solves all your problems”.
Not a single character (I use the word in the loosest sense possible) has a through line. They all seem to be different people depending on what scene you are watching with only the barest of traits to suggest that these aren’t actually a bunch of disconnected characters that we’re watching (Nate is obsessed with Christabel. Christabel is a total slut, but concerned about June. June is disgusting, until her surgery.)

Some of the films shallowness might be excusable (though the fascist outlook would still be reprehensible) were it in any sense competently executed, but it’s not, so it’s offensive in terms of quality as well as attitude. To begin with, the casting is truly, epically dreadful. Paris Hilton has all the screen charisma and acting ability of a chair. Well, maybe that’s unfair; I imagine there are a few chairs that could act her off the screen. The dead eyed Hilton never delivers any line in anything other than a flat, bored, monotone. Beyond that, though, her casting as the ultimate ideal of beauty is truly laughable. Hilton’s look here is best described as Anorexic Whore Barbie, for all the times that people in the film nearly lose their lunch merely by looking at June it was Hilton who made me struggle to hold on to my lunch. Joel David Moore, relatively entertaining in Dodgeball and Hatchet, is also terrible, his comic timing set by a metronome that is hopelessly off the pace. Christine Lakin is, on this evidence, a quite staggeringly average actress, which makes her look like Meryl Streep among a cast that would have failed auditions for a nursery school nativity. If June had anything resembling a character Lakin might have been able to do something with it, but even the modicum of presence that she brings comes as welcome relief, even if it is the very definition of too little too late. It’s also worth singling out, though he’s not in the movie much, The Greg Wilson (yes, that’s how he’s credited, I swear) as Moore’s best friend, as he gives perhaps the least funny performance ever to grace an alleged comedy. 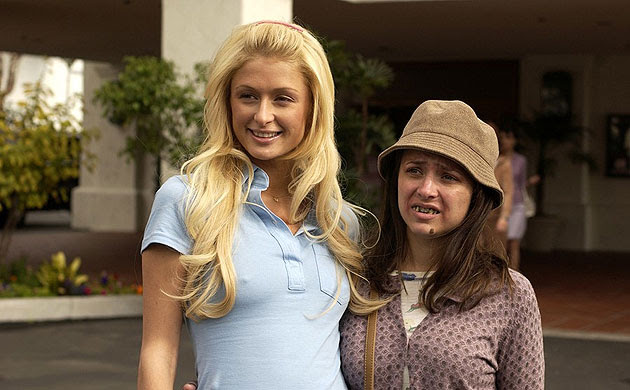 It’s not, though, like the performers ever had a chance. The script from which they are working is so apparently and so irrevocably broken that the cast could have comprised a peak form DeNiro, Streep and Spacek and it still would have been a hateful, depressing experience. The most surprising thing about this rampantly misogynistic piece of sewage is that it was written by a woman; take a bow Heidi Ferrer, you’ve set sexual equality back 30 years, may you be cursed if ever you lift a pen or approach a keyboard again. As well as being offensive bilge The Hottie and the Nottie is a comedy containing precisely no laughs, believe me, I looked for them. It features not one single line of dialogue that you would believe a real human would utter and its romantic scenes are so utterly devoid of feeling that you may never love again after watching them.

The parade of ineptitude doesn’t stop there though, no, here comes Director Tom Putnam. Whatever Tom is he’s not a film director. The Hottie and the Nottie has no visual identity at all. Its set in LA, but there’s no sense of place. It’s lit and shot with a flatness that makes it look like the world’s dullest looking sitcom. There’s not one frame here that looks like a professionally produced movie, it looks like something three blind 12 year olds shot on their summer holidays.

I didn’t pay to see The Hottie and the Nottie, I saw it online, technically I was stealing from the filmmakers (which makes me feel like I’ve done a small public service) and yet I’M the one that feels robbed. Rather than feeling like I owe the ticket price for this film to its makers I feel like I should consider suing for the considerable emotional damage I’ve suffered watching their excrementally awful product.
In case I wasn’t clear about this: The Hottie and the Nottie is unfunny, offensive, misogynistic, hateful, evil and fascist. Fuck you, movie.
Posted by Sam Inglis at 08:30

Labels: Film reviews, From the Archives