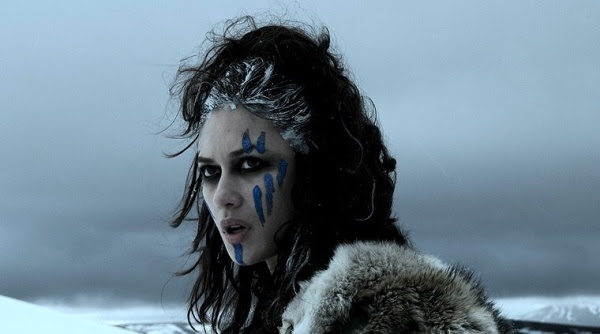 Even when he has an all female cast (as in The Descent), Neil Marshall is probably best described as a testosterone fuelled filmmaker. Centurion doesn’t see him breaking that mould. It’s based on the legend of the Ninth roman legion which, supposedly, went into Scotland to attempt to finally defeat the Picts and were never seen or heard of again. Marshall imagines the tale of the dregs of the legion (a ragtag group of seven led, after their commander Dominic West is captured, by Fassbender as Qunitus Dias) as a western of sorts, with the Picts (led by tracker and warrior Kuryelenko) chasing down the last of the roman invaders, and like many Westerns, it asks us to invest in and take the side of those invaders.

As you’d expect from the director of such splashy genre delights as Dog Soldiers and The Descent, Centurion doesn’t lack for action. We’re seldom more than a few minutes from arrows and axes flying in a series of brutal and very bloody action sequences. In the past, many films that have dealt with swordplay did so in a rather polite way; actor gets stabbed under the arm, falls out of frame. That’s not what Marshall’s interested in, here rivers literally run red with the blood of hacked off heads and claret arcs across the screen from brutally inflicted stab wounds. This is all rather good fun, or it should be, the problem, which hasn’t previously dogged Marshall, is that the action is often very hard to see. The BBFC have specified that Centurion has a 15 certificate because the violence is often fast cut, and doesn’t, therefore, dwell on detail. Unfortunately, this means that the action sequences can often feel bitty, the camera movement is fast and renders much of the large battle scene that ends the first act a blurry, detail free, mess. When Marshall calms down the action is great; well choreographed and seriously vicious, but it’s a frustrating watch at times.

Some critics have taken issue with Marshall’s screenplay, and especially the fact that his Roman characters speak modern English. The first time someone says “Fuck” it takes a little getting used to, but what Marshall’s doing is actually rather clever. If you want scrupulous authenticity then the only way to do it is to have the roman characters speak classical Latin, that’s not really an option, and so what Marshall does is takes the sentiments - including the vulgar ones - he believes his characters would be expressing and translates them into modern English. It works perfectly well, and is a clever way of making sure a mainstream audience can get close to these rather broadly drawn characters. The character development here isn’t especially brilliant, but Quintus Dias does go on a bit of a journey, and Fassbender puts it across nicely (even if his take on the neutral English accent Marshall has settled on for the Romans sometimes slips into his native Irish). The other performances are also decent. Kuryelenko is effective and genuinely threatening as the mute hunter whose “empty soul can only be filled by Roman blood”. Among the other Romans David Morrissey is the real standout, lending solid support as a man raised by the army and, in a small role, Imogen Poots continues to show that she’s an interesting and versatile rising talent (and contributes a Scottish accent so good I’m astonished to discover she’s a Londoner). On the whole only Noel Clarke lets the side down on a performance level, monotonously growling every one of his mercifully limited lines.

I’m mixed on Centurion overall, because while I was very much taken along on the journey of the remnants of the ninth, engaged by much of the visceral action, and hugely impressed - as ever - by the photography of Marshall’s regular DP Sam McCurdy (really, there isn’t anyone who lights darkness as beautifully) there were also things that consistently bothered me. I’ve mentioned the problems with the action, but there’s also the problem of identification. I’m supposed to be rooting for Quintus Dias and his soldiers, but it’s hard to do that when they are the invaders and when you get the backstory behind the ferocity of Kuryelenko’s Pict warrior Etain. So I was really left with nobody to care about, I had fun watching Centurion, but there’s really not a lot more to it than that. That’s fine, and it will make a great night out for a bunch of male friends who fancy turning their brains off and enjoying a bit of a violent romp, but I had hoped for a little more from Neil Marshall.
Posted by Sam Inglis at 13:01