Cinematters: Voting with my feet 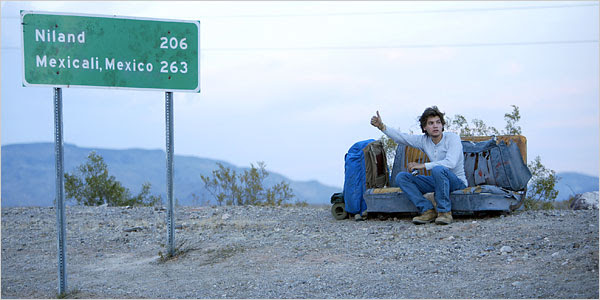 When you go to as many films as I do (I’d be surprised if the total at cinemas wasn’t nudging 1500 at this point), you see some odd behaviour from audiences. There was the guy who, at The Blair Witch Project, threw himself out of his front row seat and crawled up the aisle, screaming “It’s fucking with my head, it’s fucking with my head” - a sight both scarier and more engaging than the film. There were the ten or more people who RAN away from Gaspar Noe’s IRREVERSIBLE. There was the guy who greeted the first line in Pan’s Labyrinth with “Subtitles? Fuck this.” Oh, and there was the time that my ENTIRE film class (bar myself and my teacher), one by one, walked out of The War Zone, a film they had only attended because I had, based on the book, recommended it. Walkouts are a part of moviegoing, a part which, for a long time, I had no time for - until recently I had only ever walked out of one film; a festival screening of Peter Greenaway’s The Cook, The Thief, His Wife and Her Lover - perhaps I’m just becoming cranky in my old age (I’ll be 29 in July), but I have begun to walk out of more films in the last few years (still, compared to the amount I see, a TINY percentage) and find myself tempted to do a runner more and more frequently.

So. As an audience member, is it acceptable to walk out of a movie? How about as a critic? When should you throw in the towel and when should you stay till the bitter, bitter end?

Almost ten years went by between my first and second walkouts, ten years in which I saw more movies than ever before, movies good, bad and (frequently) indifferent and sat through every one of them (including The Matrix Reloaded, which my friend actually tried to bribe me to leave. I stuck it out, foolishly saying, “it might get better”) but Into the Wild was a bridge too far. Now, I understand that a lot of people loved Into the Wild, and I was well aware of that reception before seeing it and so, when I began to hate it very early on, I really wanted to stick it out and write a scathing review of what I was beginning to feel was one of the largest, smelliest, most steaming piles of shit I’d seen in an age. I got 80 minutes in; the best part of the length of a full feature. At that point I had been engaged, for several minutes, in a debate with myself about walking out. I had even let the thought run through my head that IF I left then fate might have me hit by a bus. I walked out anyway, despite suspecting that, had I stayed, the film couldn’t have lasted more than another 20 minutes. I have seldom been so relieved as I was when I discovered that Into the Wild runs 160 minutes. I’d only been half way in, I dodged a bullet, and I wasn’t even hit by a bus.

Aside from the bus, the other thing that almost stopped me leaving Into the Wild (and has kept me in many other terrible films) was my writing. As a critic I believe that one should provide an educated opinion, but it’s also a part of the job to produce something that’s an entertaining read, and I thought that the fact that, for several minutes, I had been less focused on the film than I had one whether being mugged was a preferable option to staying in the cinema probably undermined my authority on the experience as a whole, and might not make especially entertaining or informative reading. Here’s the other thing. If you’ve made a bad movie, and it’s not even interesting in its badness (and, to be fair to Michael Bay, while Transformers: Revenge of the Fallen is unquestionably one of the worst things ever created by man its catastrophic awfulness exerts a certain perverse fascination, in a way that, for example, The Descent Part 2, rancid as it is, just doesn’t) why the hell should anyone have to sit through it? Obviously, if I end up getting paid to write about movies, I’ll sit through everything, but until it’s actually a job why should I have to plough through something as utterly non-descript as Surrogates? That old argument haunts me… “It might get better”. Okay, true. The second half of My Blueberry Nights (Wong Kar-Wai’s pretty but, as far as I could tell, numbingly tedious, English language debut, which I walked out on after 43 minutes) might be a masterpiece, but honestly, if the first 43 minutes were sending me to sleep what are the chances of the last 50 or so being any better? And even if they were, could that really atone for the opening 43 minutes?

The bottom line? If you made The Proposal (which I didn’t walk out of, but wish I had) or The Ugly Truth (ditto) or Into the Wild you don’t deserve my time. Time is precious; I could be spending it buying a great record. I could be spending it eating a meal, I could be spending it with a friend, but I’m not, I’m spending it with your movie and if that’s the choice I’ve made then your part of the contract is to entertain, or in some other way engage me. It’s not that hard, really, in fact I’m BEGGING you to do it whenever I walk into a cinema, you’ll seldom find a person who wants you to succeed so much (yes, even if you happen to be Michael Bay) and frankly if you can’t manage it then I can’t see how you deserve 90 minutes or more of my time. As I get older I’m becoming less and less willing to waste time on bad movies that could be spent on good ones, and that being the case I suspect I’ll continue to very occasionally, walk out of films that utterly fail to engage me on any level.

Here, in case anyone cares, is a complete list of the films I’ve walked out of.
The Cook, The Thief, His Wife and Her Lover
Into the Wild
My Blueberry Nights
Speed Racer [Awful, and the colour gave me a headache]
Where the Wild Things Are
The Blind Side [Dull, dull, dull. There was also the issue here of the people behind me, who became rather threatening after I asked them, very politely, to be quiet.]

Six films, out of around 1500, hardly a bad record, but I stand by it, and by the act of walking out (quietly, and without disrupting the film for anyone else) as a statement on your feelings about a film. Frankly, if anything, I ought to do it more often.
Posted by Sam Inglis at 20:53