The Week in Movies

Hi, sorry this is a day late. I spent over four hours non-stop on the Oscar liveblog, and frankly, my brain was mush yesterday, hence the late arrival of this post. 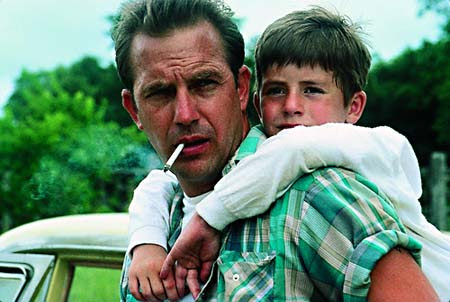 I’ve always liked Clint Eastwood more as a director than as an actor, and this is a good example of why. He takes a rather cliché story of a con on the run (Kevin Costner) becoming a father figure of sorts to the young boy he takes as a hostage, and manages to give it life with strong cinematography and a near career best performance from an unusually nuanced Costner. There are also good contributions from the supporting cast, notably Laura Dern and a barely recognisable Bradley Whitford, some years before he entered The West Wing. Unfortunately Clint himself growls his way apathetically through the role of the grizzled sheriff (what a stretch) pursuing Costner. A mixed bag then, but worth a look.

This is only Haneke’s second feature, but already his trademarks are firmly in place. The film that this one most reminded me of was Hidden; both use similar motifs of long, static shots of video images to unbelievably disturbing effect. The titular Benny (Arno Frisch, subsequently seen in Haneke’s original Funny Games) is a 14 year old middle class kid, whose interest in home movies has been indulged by his parents. He spends much of his time watching violent videos, notably a hideous slaughterhouse film, which he screens over and over. One day, while his parents are away, Benny meets a girl at the video store, brings her home and, while filming, kills her with a bolt gun.

The fact that, up until Benny shows his parents what he has done, the film unfolds almost without dialogue, only adds to the film’s disturbing nature. The violence, as ever with Haneke, isn’t as explicit as you might think it is, but is unbelievably shocking. That’s really down to Haneke’s unwillingness to cut away. We don’t see the murder in any detail, but the static camera allows it to unfold in appalling real time, forcing us to live in the moment. In the third act the film runs a little off the rails, as it begins to move further and further away from Benny’s experience, but it’s worth persevering until the stunningly cold ending. Haneke isn’t for all tastes, and this isn’t his best, but it might prove a good introduction to this challenging filmmaker.

Monster House director Kenan’s first live action film is a rather familiar dystopian sci-fi but, “y’know, for kids!” Ember is an underground city to which mankind retreated after the surface became uninhabitable. We were only supposed to be there 200 years, but that knowledge, and the key to the way out of Ember has been lost. However, when she finds a mysterious box Lina (Saoirse Ronan), begins to put the clues together and see that there might be a way to leave her crumbling home.

It may not be especially inventive, but at a brisk 90 minutes and with amusing cameos from the likes of Tim Robbins and Bill Murray, Ember moves fast enough that it always remains an enjoyable ride. However, the best reason to see it (as with most of her work) is Saoirse Ronan, who - again - finds a heart and soul in a rather thin character.

Out of morbid curiosity I finally saw this long delayed remake of the brilliant Korean film Addicted. Guess what? It's unspeakably shit. Sarah Michelle Gellar is titanically awful in the role so beautifully played by Lee Mi-yeon in the original; she betrays absolutely no expression, so there's no sense of the emotional upheaval her character is meant to be going through. She's in good company though, as all the performances are dreadful, the direction and screenplay are appallingly cheap and generic and it all adds up to a hideously stupid and dull 85 minutes. Apparently a 30 minute alternate ending on the DVD cleaves closer to the Korean version, improving the film. I don’t care enough to find out whether this is true. 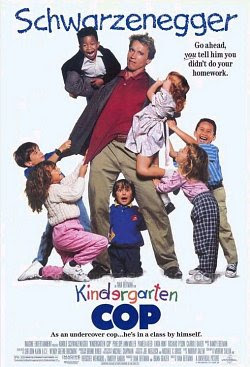 Aside from the still underrated Last Action Hero (you heard me), this is the best of Arnie’s comedies. It should be said though that despite the lightness of tone, the title and Ivan Reitman behind the lens, Kindergarten Cop has something of a hard edge to it. In the third act, when the villain of the piece (Richard Tyson, so slimy you suspect he may actually ooze rather than walk) turns up the film takes a pretty violent turn. This means that the film does come off rather confused at the end of the day. That said, the comedy works well enough, the kids are cute and funny and by God, Penelope Ann Miller is adorable (and, while she’s no great shakes as an actress, deserves better projects than the recently completed Robosapien: Rebooted). It’s no classic, but hell, it still makes me laugh.

A hugely stupid film, packed with plot holes, rubbish dialogue, ropey CGI, underdeveloped characters and more a setup for a sequel than a film in its own right. And yet... I REALLY enjoyed it, because, and this is the point so many blockbusters miss, it's fun. The performances are a little better than the film deserves (especially Joseph Gordon Levitt's hilariously pantomimic turn) but the main selling point here is simply that Stephen Sommers keeps the entertainment coming at such a pace that you never have time to think about how dumb the film is. I got sucked into the experience, it's no masterpiece, even within its genre, but this is a fun flick, and well worth seeing.

Mmmmmmmm… Anna Kendrick… Sorry, sorry, I’m supposed to be reviewing Rocket Science in which an awkward kid with a stammer is recruited by the girl he has a crush on (Kendrick… mmmm…) to be on the high school debating team. The first fictional film from Spellbound director Jeffrey Blitz, it hits a lot of the usual high school movie clichés, and in the build up to the final debate championship it starts to feel a little hackneyd, but happily Blitz veers away from the expected resolution and goes for something both more satisfying (in a quiet sort of way) and more true. The performances are all solid, and it’s a shame that we haven’t seen more of Reece Thompson since, but the movie is stolen from under him by the excellent Kendrick. Mmmmmmm… Anna Kendrick. Tragically this brilliant horror film was director Michael Reeves’ last. He died of an accidental drug overdose, aged just 25, shortly after it was released. It’s tragic, because we lost, in Reeves, a genuinely different and interesting voice, one that could easily have been producing distinctive films even now. Though it was made five years earlier, Witchfinder General deserves to stand with The Wicker Man as one of the most haunting British horror films of the late 60’s and early 70’s. Much of that is down to Reeves’ direction, which is shocking, but only occasionally visceral (witness one scene in which a ‘witch’ is burnt by being lowered from a scaffold into a fire) but what is more pertinent to film’s overall effect is Reeves’ direction of his star Vincent Price.

They apparently hated each other, Price exasperated that Reeves was constantly asking him not to act, but it is an indelible performance. All Price’s artifice is stripped away, leaving a cold-hearted bastard whose corruption emanates from every pore, and whose eyes are dead and absolutely chilling. There are some hokey effects and some ropey acting (notably from Hillary Dwyer, cast, surely, more for her pretty face than her talent) but this is a striking film that still shocks and chills.

This Bosnian film starts out well, drawing convincing portraits of a Mother (Mirjana Karanovic) working hard to provide for her young daughter (Luna Mijovic) in difficult economic circumstances in a country still scarred by war. Sadly the titular secret is, five minutes in, stark staring obvious, and in the last twenty minutes the film lurches laughably into melodrama, a change which neither the script nor the actors can pull off.
Posted by Sam Inglis at 16:23