The Week in Movies 5

You wouldn’t expect Primal Fear to be any good, it’s a potboiler of a legal thriller, based on a Grishamalike airport paperback and it’s directed by one of Hollywood’s most workmanlike filmmakers. That said, this film is a lot better than it has any right to be. The script is clunky, but it is blessed with an outstanding cast, even in small parts and all of the actors - yes, even Richard Gere - give strong performances. Laura Linney is especially impressive as the brittle prosecutor facing off against Gere’s defence attorney, but it’s another performance that the film is remembered for.

Edward Norton makes his (Oscar nominated) debut as the young man accused of murder, and his performance is absolutely stunning, shifting gears smoothly and with total assurance, but never more so than in the film’s final scene, whose twist dropped my jaw the first time I saw it. Primal Fear isn’t a brilliant film, but it’s well worth seeing for the performances, especially Norton’s. 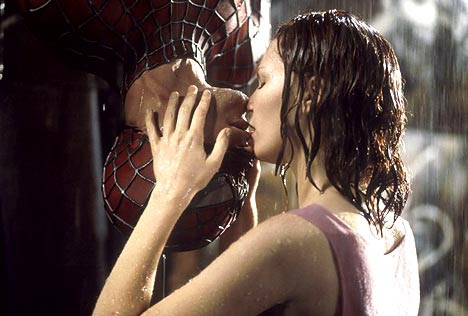 The next Spider-Man film will be a reboot, directed by (500) Days of Summer’s Marc Webb, so it seems a good time to look at Sam Raimi’s take on the character with fresh eyes. The first film suffers from all the problems of an origin story; the setup takes up so much of the film that the villain (Willem Dafoe) doesn’t get enough screentime and the second hour of the film feels very rushed. That said, it does capture the feel of the classic Spider-Man stories quite well, with especially winning portrayals of Peter Parker (Tobey Maguire), Aunt May and Uncle Ben (Rosemary Harris and Cliff Robertson) and J Jonah Jameson (a priceless JK Simmons, looking like he stepped out of the comic). While some of the CGI now feels a little rubbery Raimi does really capture the fluid and extreme movement that Spidey is capable of, and the action scenes, especially the final face off with the Green Goblin, are surprisingly punchy. On the downside, the script can be rather over earnest, especially in the depiction of Kirsten Dunst’s Mary Jane and the Green Goblin has one of the worst costumes in superhero movie history, making him look like a cheap Power Ranger. Still, it’s a fine franchise opener on the whole.

Spider-Man 2.1 adds eight minutes to Raimi’s theatrical cut of the sequel, and the additions are largely worthwhile (with the exception of an extra scene with MJ shopping for a wedding dress). In whatever form you see it Spider-Man 2 is one of the great superhero films. It is faster moving, smarter, deeper and more enjoyable than the first film. Much of that is thanks to Alfred Molina’s fantastic performance as Dr. Octopus, who the film makes a much more shaded character than the comics ever did. Raimi seems liberated here too, indulging in a brilliant, Evil Dead like, scene of Ock’s tentacles attacking the doctors who first attempt to remove them from their host’s body. The action is excellent, with improved effects making the fight on the side of an elevated train feel especially exciting and dangerous, and there’s more of a sense of fun to this movie too, with some surprisingly broad comedy on show and a very nice in joke referring to the back injury that nearly forced Maguire’s replacement. MJ is still a drag, and Peter can be a real drip, but for the most part this is, as the title nearly had it, The Amazing Spider-Man

I hated Spider-Man 3 when I first saw it, but looking at it on DVD I’ve warmed to it a little. For about 75 minutes it’s probably the best of the series. It’s got a great villain (Thomas Haden-Church as Sandman), it sets up a rival for the ever more tedious MJ in Bryce Dallas Howard’s Gwen Stacy, it’s very funny, with a brilliant scene for JK Simmons’ Jonah Jameson and it is cleverly written, with the story that’s been brewing between Peter and Harry Osborn since the first film finally coming full circle. There’s a LOT going on here, and then Raimi goes and fucks it up, by adding in the symbiote. The minute Peter puts on the black costume Spider-Man 3 becomes incredibly stupid, with Peter suddenly becoming both an utter tool and taking to dressing like an emo kid some 15 years Maguire’s junior, the sequence of Peter dancing down the street is pure torture. Raimi was forced to include Venom in the film, and it shows.  He clearly has no idea how to handle the character, and crams his entire story into the last 30 minutes of an already packed film. It’s a shame, because there is so much good stuff here (especially the subway fight between Spidey and Sandman), and the film could easily have been the best of the series.

Toy Story 2 is probably the greatest sequel ever made. It’s not just a great film in its own right, it manages to follow up a groundbreaking classic and not just match but comprehensively better the first film, but I don’t need to tell you that. Toy Story 2 is a brilliant film however you see it, but this 3D retrofit is yet more proof that 3D adds nothing to movies. It’s technically flawless, but it doesn’t change the experience of the film one iota. The 3D is also very poorly used, nothing really emerges from the screen, which meant that, though I was mostly just swept up in the film, occasionally I was distracted by the fact that despite the 3D effect, the fourth wall seemed as solid as ever. A perfect film then, but in a process that does nothing for it.


The Hitchhiker: Last Scene [short]
DIR: Paul Verhoeven
I’m a big Paul Verhoeven fan, which is just as well because, while it is an interesting curio, this TV epsidode that Verhoeven made just prior to Robocop, as a way of testing the water with an American crew, is absolutely abysmal. Every now and then there is a flash of Verhoeven’s style, but he’s largely buried by an appalling, predictable, script (about a director (Peter Coyote) who’ll go to any lengths to get a performance out of his leading lady) and some monumentally terrible performances (especially, ironically, from his leading lady, who seems to have been cast for her very nice breasts). The best thing about this for fans is that there’s a commentary by Verhoeven, who is as interesting as ever.

A titanic flop on its 1991 release, this film is probably due a reappraisal (what’s the bet on a 3D remake?), and it certainly deserves better than its current, largely forgotten, status. The 1930’s Hollywood set story of a pilot (Bill Campbell) who finds a jetpack coveted by Errol Flynn style star and Nazi agent Neville Sinclair (Timothy Dalton), may be familiar and predictable, but the telling is fun and the visuals are great. Joe Johnston is a skilled jorneyman filmmaker and the deco look of Rocketeer is a real joy to look at. The performances are broad but, the bland Campbell aside, the cast do decent work, with particularly noteworthy turns from Dalton, clearly having a wonderful time sending up Errol Flynn and Jennifer Connelly, perfectly cast, and never more ravishing, as an aspiring starlet.

The pace slows at times, and the action certainly isn’t up to Raiders of the Lost Ark standards, but this is an enjoyable little romp. I’d actually not mind seeing a remake, or reboot, of this film, because it could have been the start of a rather fun franchise.


MANT!
DIR: Joe Dante
This 16 minute version of Joe Dante’s wonderful, hilarious, send up/homage to 1950’s nuclear para noia sci-fi is only available on the laserdisc version of Matinee (or on youtube). It’s well worth hunting down, because there is a lot more to enjoy here than there was when MANT! Was just the film within the film in Matinee. The whole cast gets the tone absolutely right, never quite winking at the audience. This also goes for Dante, whose obvious affection for these films is palpable through this excellent short.
Posted by Sam Inglis at 11:36