I don’t have that many interests, not because I’m dull, I’m just a little obsessive and there’s not room for many interests when you are a born collector. Other than film my main love is music. I can’t play or sing a note, but since a good friend gave me a few albums, including Led Zeppelin’s Remasters, in 2000 I’ve been an absolute fiend for new bands, building up a collection of about 600 albums.

Recently I’ve bought an album by an actress, and watched a short film by a musician, so I thought it might be fun to review both here. I’m not so well practiced as a music writer, so cut me a little slack.

Few artists have so completely stamped their personality, their individual vision, on all of their work as Kate Bush, especially from the Hounds of Love album onwards, from which time she directed almost all of her own videos. This short film (just 45 minutes) is, essentially, a loosely linked collection of videos for songs from the concept album The Red Shoes, which takes its inspiration from the same fairytale as the ballet depicted in Powell and Pressburger’s identically titled masterpiece. Some of these videos were released along with the singles from the album, but some are exclusive to the film, which also features a very loose wraparound story involving Miranda Richardson, who has had to wear the red shoes, and thus been cursed to dance eternally, until she gives them to Kate, cursing her instead.

Bush is clearly a woman with a strong vision, and parts of The Line, the Cross, and the Curve are very beautiful. The choreography for the opening Rubberband Girl is energetic and sexy (clearly a crap day at the office for the male dancer) and the fantasy world of the rest of the film, while clearly executed on the cheap and not massively original, throws up a few striking images. Not least among these is Miranda Richardson who, as usual, isn’t allowed to be the beautiful woman she actually is and is buried under extreme make up, and some especially freaky eyebrows, which seem to have a life of their own.

There are two major problems in the fantasy sequences. The first is Bush herself, she’s an extraordinary musician, but a massively subordinary actress, the dialogue isn’t challenging but she delivers it very poorly, and her surprisingly featureless speaking voice does nothing for it. The other problem is that the story is so loose that it is more a between songs irritant than something engage you. The music videos are fine in and of themselves, and of course the songs (which include The Red Shoes and the gorgeous Moments of Pleasure) are brilliant. The inclusion of Eat the Music baffles me slightly, even on the album it sticks out like a sore thumb, but the suddenly upbeat video, in contrast to the darkness that goes before and after makes it feel more like and editing mistake than an integral part of the film. Ultimately, The Line, the Cross, and the Curve is an interesting curio as a Kate Bush fan, but as a film fan it isn’t especially rewarding. 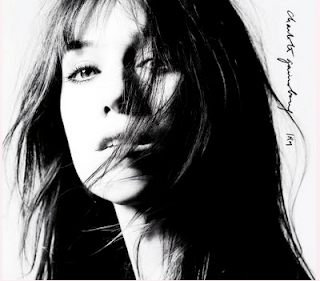 I’m in love with Charlotte Gainsbourg. To be more specific I’m in love with her voice. I could listen to her talk forever, especially when she’s speaking English there’s just something about that voice that, well, does it for me. With that in mind I was pretty excited to pick up her first album (well, her first proper effort anyway) 5:55. That record was written and produced by Air and The Divine Comedy’s Neil Hannon and while it had some great things on it (not least the fantastic single The Operation) I was a little underwhelmed by it as a whole. For this album Gainsbourg has teamed up with another interesting writer/producer in Beck.

What Beck brings to IRM is a much more varied musical palette than the sometimes wearing ambience that we heard on 5:55. Here we get everything from the purposely grinding electronic noise of IRM to the almost punky guitars of Trick Pony, from the relatively straightforward pop of the single Heaven Can Wait to the basic blues of Dandelion. It’s a much easier album to play straight through than 5:55. It’s also a much more confident album. On 5:55 Gainsbourg often sounded nervy and her voice was extremely quiet, here there’s a little more force in her vocal, which is not to say she’s suddenly become Courtney Love, just that she sounds more comfortable behind the mic. Beck also stretches her a bit and it is the tracks on which she seems most challenged (Trick Pony and the lovely ballad In the Time of the Assassins, for instance) that end up as the album’s stand out tracks. There’s also a great deal to be said for the fact that the IRM’s 14 tracks don’t hang about. Some clock in around two minutes, the longest is just over five, and feels lengthy.

Though Gainsbourg didn’t have much of a hand in the writing of these songs (she’s credited on just one track) there does seem to be personal material here, most notably on the title track. IRM is the French acronym for what in English is called an MRI scan, Gainsbourg had to have many of these when she fell ill in 2007 with what turned out to be a brain aneurysm, and the music for the track sounds almost exactly like the workings of an MRI scanner, while the lyrics talk about looking inside the brain. No other track has such obvious personal resonance, it’s as if she decided to address the personal on that one track and otherwise concentrate on just making a really strong album. In this she largely succeeds, a few tracks reveal the limitations of her voice (notably Me and Jane Doe and La Collectioneuse) but for the most part this is a highly pleasurable listen, even if you aren’t as mesmerised by Charlotte Gainsbourg’s voice as I am.

Standout Tracks: Trick Pony / Master's Hands /
In the Time of the Assassins / Greenwich Mean Time
Posted by Sam Inglis at 18:23