I have been slacking off when it comes to reviewing films lately, mainly because I’ve had such a lot of other stuff to work on for the site and because I’ve been out a lot of late. Anyway, time to catch up with some mini reviews 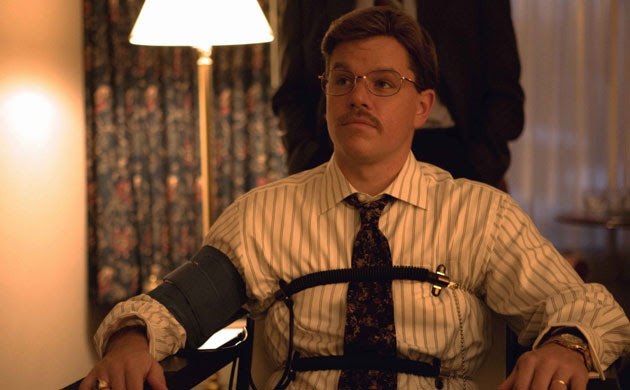 Soderbergh’s fourth, and last, British release of 2009 is also his best. The Informant! Is as jaunty and slight as the punctuation of its title would suggest, but it’s also rather accomplished, and a lot of fun.

Though this tale of a fantasist (Matt Damon) who sets himself up as a corporate informant for the FBI is set in the early and mid 1990’s, and Soderbergh gets the period detail bang on, the film itself feels more like something out of the 60’s or 70’s. The more formal framing, the slower more classical cutting and especially the bold and upbeat score by Marvin Hamlisch all recall that period of cinema. This is also reflected in the way that Soderbergh refuses to spoonfeed us, unafraid to leave us in the dark as to exactly what Damon’s Mark Whitacre is doing, and what his motives are. It’s easily the most fun that Soderbergh has had, and has been, in a long time.

The cast is as accomplished as it is eclectic, the only real downer being that the talented Melanie Lyskey goes underused in the thankless role of Whitacre’s wife. Matt Damon is fast becoming one of America’s more interesting character actors, and here he really does transform himself gaining 30 pounds and an awful tache to make Whitacre just another schlub. He really does get inside the guy though, and as the film runs on and Whitacre’s mental state becomes clear the increasing desperation of Damon’s performance is both funny and true.

This is a light soufflé of a movie, but it’s enjoyable and extremely well made, and more fun than a lot of what’s been at the multiplexes this year.

I really enjoyed watching A Serious Man as it played out and yet it’s been nagging at me ever since. No Country For Old Men has cast a long and deep shadow - a film that good can’t help but resonate - and by comparison both Burn After Reading and A Serious Man seem a little insubstantial.

The story is apparently the Coen’s most personal. Set in a Midwestern Jewish community in 1967 it sees Larry Gopnik (the excellent Michael Stuhlbarg) trying to cope with stress at work, his son’s impending Bar Mitzvah and the fact that his wife has fallen for their much older neighbour Sy Ableman. For me the problem is that while this is all very funny (particularly the scenes in which Sy tries to be very friendly with Larry, despite the fact that Larry’s wife is leaving him for Sy) it often feels like little more than a collection of floating bits (never more so than with the very odd prologue). As with Burn After Reading, the bits are unimpeachable in and of themselves, but they never quite draw together into a satisfying whole.

It’s certainly a Coen Brothers film, the rhythms are very much their own, both in the dialogue and the storytelling, and Gopnik is a classic put upon Coen hero (see the scene when he’s trying to explain that he didn’t order Santana’s Abraxas from a record club) and, as has been their tradition of late, the ending is abrupt almost to the point of rudeness. It’s not an unenjoyable film, and yet I can’t quite embrace it, I think I may have to see it again to really explain why.

Fuck 3D. Really, fuck it, it’s a pox on cinema and I hope it dies on its ugly, pointless, arse.

From that you may have some idea of how I felt about Robert Zemeckis’ latest, his third motion capture film in 3D. It’s a nightmare. First of all; why motion capture? It’s a bizarre halfway house between live action and animation, and it looks awful. There is no denying the quality of either the graphics or the animation, but that’s a lot of the problem. The characters look so close to human that the ways in which they fall short are both disconcerting and creepy. It’s mainly the eyes, which are dead, and give the characters an air of empty soulessness that I’ve only previously seen in Kristen Stewart.

Another problem is with the 3D. The fact that the new glasses are dark presents a real problem, in that they result in a 30% colour loss when you put them on. This is a huge issue for the film, because it’s already very dark and the glasses make much of it almost unintelligible, so not only was I bored and creeped out, I was straining to see very much. Ah, progress.

Some of the performances are okay, but few get over the strange, distancing, look of the film. Gary Oldman would make a great Bob Cratchit, so it was frustrating seeing him play the role through an avatar that looked like a puffy cheeked version of himself, as if he had been crossbred with a hamster. Colin Firth is also good, appealing in the role of Scrooge’s nephew Fred, but he too is drowned by the process. Only Robin Wright really stands out, she’s got a tiny, thankless, featured part as the love of Scrooge’s young life and her sensitive playing is so good that, for a few minutes, the digital barriers seemed to come down and I accepted her character as real.

Sadly the whole film is undermined by Jim Carrey, as both Scrooge and the three ghosts he appears to be in an especially terrible panto. Again, it’s not a bad thought, casting Carrey as Scrooge, unfortunately he plays the whole thing with the ham dial turned up to 11 and that, along with the visuals and the inappropriate and poorly realised (and interminable) added action sequences make this a singularly unappealing Christmas Carol. Stick with the Muppets.

I’m often wary when people are saying that something is the scariest movie they’ve seen in… however long. As a horror fan I’m pretty hardened to scary movies, making me jump is tough, because I know enough about editing and pacing to figure out the timing of a scare more often than not. I want to be scared though, because that’s why horror is such an exhilarating genre. The hype surrounding Paranormal Activity suggested that it was going to scare the shit out of me.

There are, to be fair, two scares in this movie. They both come in the last 30 seconds, and one is a near direct lift from endless amounts of Japanese horror. That’s not a lot to hang 86 minutes on and that’s the problem. It just isn’t scary, at all. The subtle special effects are excellent, the performances by Micah Sloat and Katie Featherston are fine and the found footage illusion is extremely well maintained, but none of that really matters because the film utterly fails in its raison d’etre.

People have talked about this film disturbing them for days afterwards. I shrugged it off within milliseconds of its final shot. Quite possibly the most undeservingly hyped film of 2009.

Powell and Pressburger’s colour films are some of the most beautiful ever shot (think of Black Narcissus or A Matter of Life and Death) and The Red Shoes is perhaps their, and cinematographer Jack Cardiff’s most stunning work. This new print, supervised by Martin Scorsese and Powell’s widow Thelma Schoonmaker, restores The Red Shoes to its original glory, in fact it probably looks better now than even the original release prints. The colour explodes off the screen, and yet there is still filmic texture to this digital print. It is a beautiful restoration for a masterpiece.

The film itself is a rather simple backstage story set in a ballet company (based on the two rival Ballet Russe companies) and a young dancer (the gorgeous and graceful Moira Shearer) torn between her love for the resident composer (Marius Goring) and the desire of the company patron (Anton Walbrook) to make her a great dancer. The story is somewhat secondary to the spectacle, and what spectacle it is. The dance sequences are stunning, with Powell and Pressburger letting Robert Helpmann’s beautiful choreography and the dancers interpreting it own the frame.

The culmination if the 17 minute ballet of The Red Shoes, with designs by Salvador Dali adding to the slightly surreal beauty. In this sequence Shearer is just stunning, the grace with which she moves is always enchanting to watch, but she and the other dancers really do manage to express character and emotion though their wordless movements, especially in this sequence.

Some will find the heightened emotion of the film to be somewhat overdramatic, but the acting is largely excellent (though some of the dancers are clearly dancers rather than actors), if of it’s time and Shearer, Goring and Walbrook make for an intriguing triangle, each giving an excellent performance. However, this is largely the Powell and Pressburger show, and there can be few better examples of these masters of their art at work.
Posted by Sam Inglis at 13:49