Even before it has been released, Creation has caused controversy in the US. I doubt it would have if anyone had seen it, because this movie is so stunningly dull that it is near impossible to imagine anyone getting annoyed about it.

The latest by resolutely adequate director Jon Amiel (Sommersby, Copycat) Creation purports to be the story of the writing of The Origin of Species. That, for the most part, isn’t really true. Rather the film is about Darwin’s stalling and the terrible sadness over the death of his eldest daughter, which appears to have, for a long time, kept him from completing the book. It is a wise choice to have a narrow focus on a life as expansive as Darwin’s, but you can’t help but feel that, in this case, the focus has been put in the wrong place. I don’t know enough about Darwin to comment on the veracity of the story told here, but the telling is overblown, and hammers the emotional buttons with such desperation that I came to suspect that massive liberties were being taken with the truth.

As a movie, Creation feels curiously unevolved. It often plays as if it were from the 1930’s. The performances are especially old fashioned. The entire cast acts not as if they were playing to a camera but to the back of a huge theatre. Every emotion is writ large; every line (over)enunciated in ludicrously clipped upper class English accents (on the pure technical point here, credit to Jennifer Connelly, whose accent is excellent). It’s a performance style that is unfamiliar in modern cinema, and disconcerting because of that. More than that though, the acting is combined with Amiel’s grasping direction, which often tries to pummel emotion out of the audience and with a script at once thuddingly obvious in its aspirations to contemporary resonance and desperate to manipulate tears out of us. It all adds up to an intensely off-putting experience.

Paul Bettany and Jennifer Connelly are both capable actors, and if they stopped playing to the rafters they would likely be fine in the roles of Charles and Emma Darwin. The fact that Creation doesn’t work at a performance level is unlikely to be their fault as much as it is that of Amiel’s ham-fisted direction. The supporting cast do better. Jeremy Northam and Toby Jones pop up in far too few scenes each as, respectively, Darwin’s local priest and a fellow scientist. The real star turn is that of young Martha West, who brings Annie Darwin to sparkling life, even when she’s appearing as a ghost.

At several points during the film Charles Darwin tells his children stories of the trips he made researching The Origin of Species. Here the film comes to life, especially in one scene that shows Bettany interacting with an Orangutan. These brief glimpses had me far more interested in the story of the research for this seminal book than I was in that of its writing. The impulse to find some insight into Darwin the man is admirable, but this dull film tells us little about him, and fails to make him interesting or sympathetic enough to even interest us in learning more. At the end of the day Creation feels like a two hour digression from an interesting discussion. 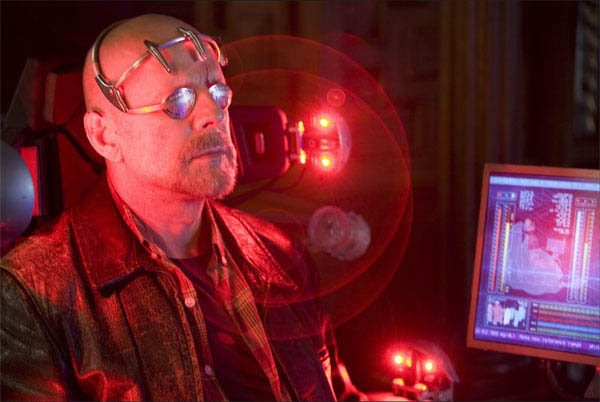 It’s an appealing idea, the ability to be someone else. Just think; if I had a surrogate he could have seen this crappy movie for me. Truly then the world would be a better place.

Surrogates seems to take place in an alternate present, in which humans no longer leave their houses. Instead they have ‘surrogates’ robotic bodies they can remotely control, allowing them risk free experiences of all kinds, as well as the ability to appear not as they are but as they would like to be. A murder - the first in many years - that kills both a surrogate and his operator leads FBI agents Grier and Peters (Wills and Mitchell) to realise that there is a new type of weapon on the streets, and that they must find it before the militant anti-surrogate humans, led by The Prophet (Ving Rhames) are able to use it on a large scale.

That’s just the setup, and what we learn during the first ten minutes of the movie. During that time I had the entire plot worked out, almost beat for beat. That’s the biggest problem with Surrogates, it is assembled from the spare parts of a hundred better sci-fi movies, and that means that it is so predictable that you could almost set your watch by the manner in which the plot elements are ticked off. It also means that the film is unspeakably boring.

All sci-fi movies are really about the present in which they are made, and Surrogates is no exception. Satire and social comment are to be welcomed in sci-fi, except when they are done so ham-fistedly as they are here. The Dreads and their leader The Prophet are clear analogues for al-Qeada and Osama Bin Laden, so much so that a tape from The Prophet apes, down to the last detail, the Bin Laden tapes that periodically pop up on the news. It’s obvious, and poorly used, but that’s not the problem. The problem is that by casting the Dreads in this light the film appears to say that, at the end of the day, terrorism is good, and works. Perhaps the wrong message. The satire of our relationship with technology, and how it can cut us off from the real world, is also far too broad, and lands with a thud.

I wasn’t the only person who was bored during this film. Bruce Willis was right there with me. I like Willis, he’s charismatic and a far better actor then he’s often given credit for, but here he seems half asleep much of the time. He mumbles his way through scenes, looking like a man with a large alimony bill to pay, betraying none of his usual magnetism and bringing no colour to his character. I saw Surrogates less than 24 hours ago, and I couldn’t give you one distinguishing quality about Tom Grier. He’s a nothing, and that’s exactly what Willis brings to the table.

The other performances range from attractive set decoration from Radha Mitchell and the quite jaw droppingly stunning Rosamund Pike to the wild overplaying of James Cromwell (again, usually so good) and Ving Rhames. It is perhaps an inherent danger of the subject of the film that the characters feel bland and emotionless, but it makes for a seriously unsatisfying viewing experience all the same.

The thing that really should have worked here, especially with Jonathan Mostow on board, was the action. On the plus side it is pleasingly free of the fast cut shaky-cam that has ruined so many action movies of late, but Surrogates' action is seriously lacking in imagination. The stand out action scene has Willis (as Grier’s surrogate) free running through Dread territory and is a direct, though CG assisted, lift from the far, far better scene at the beginning of Casino Royale. The rest of the action is brief, and extremely low impact.

At a technical level Surrogates isn’t bad. The digital effects are decent and it is competently shot, but I really expected more from this. It has an interesting idea, a strong cast and a good action director; it’s a shame that it does nothing with those assets.
Posted by Sam Inglis at 16:23