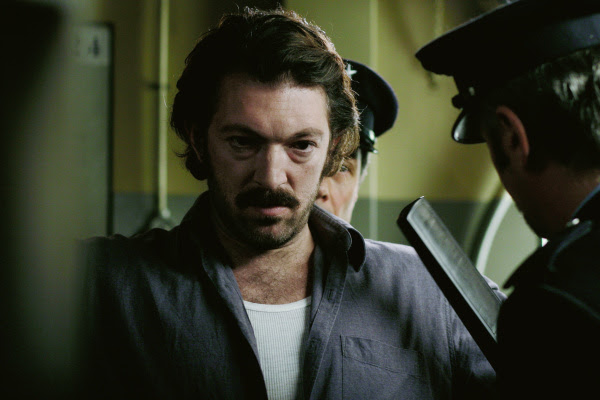 This concluding part of Jean-Francois Richet’s biopic of the French gangster Jacques Mesrine shares both the virtues and the flaws of Mesrine: Killer Instinct.

Holding it all together is a towering performance by Vincent Cassel. It’s powerful work, shining through the endless changes in Mesrine’s appearance, the myriad bad hairstyles and the ever changing, usually laughably unconvincing, facial hair. Cassel projects raw charisma, allowing you to buy Mesrine as both ladies man and folk hero, despite the fact that he’s awful to his girlfriends and a thief and possibly a killer. Cassel really transforms himself. For Public Enemy No. 1 he added over two stone to his usually trim frame, developing a hefty beer gut for Mesrine’s later years. He also manages to make Mesrine somewhat sympathetic, especially during an interview, as he reflects on how he doesn’t expect to live long. It’s a masterful piece of acting, one in which Cassel is completely lost.

The rest of a huge cast also impresses. In Killer Instinct it was Gerard Depardieu who stood out, with a bear like portrayal of a gangster who took a young Mesrine under his wing. In Public Enemy No. 1 the focus is shared a little more evenly, and this allows the supporting players to make more of an impression. The luminous Ludivine Sagnier is excellent as Mesrine’s last companion, while Mathieu Amalric is the most charismatic of Mesrine’s partners in crime. My favourite supporting player in this film appears for only about three minutes, but even with such limited screen time Anne Consigny (as a lawyer who helps Mesrine escape a maximum security prison) again serves notice that she’s a huge and diverse talent.

I liked Jean-Francois Richet’s remake of Assault on Precinct 13 rather more than I probably should have.  Here, again he shows that he’s a talented filmmaker. The action scenes are excellent; pacy, punchy and admirably varied given just how many bank heists and prison escapes there are in the story.

The problem with both parts is that, even taken as a whole, they feel frustratingly bitty and incomplete. Even with a collective running time of four hours there is a sense of rushing through events that deserve more breathing space. It feels like the story would be better suited to television, where there would be time to get deeper into the events and the characters surrounding Mesrine. It would be particularly welcome to see the Police explored in more detail. There is also a niggling sense that, while the performances are wonderful and the direction is stylish, there’s not really anything new here. Structure is also an issue. Mesrine unfolds in a circular narrative, beginning and ending with Mesrine’s shooting by the French police. The fact that Public Enemy No. 1 spends so long on this sequence, which we’ve seen already, trying to play it for tension a second time, tested my patience. Without that opening sequence it would work brilliantly, but with it fresh in the mind it is little more than a 15-minute action replay.

Mesrine is a frustrating film. There is much to recommend it, but it is also riddled with flaws. Overall this second part is the better, because it has more of a through line, but as a whole it ends up as a relatively average addition to the legacy of the gangster film. 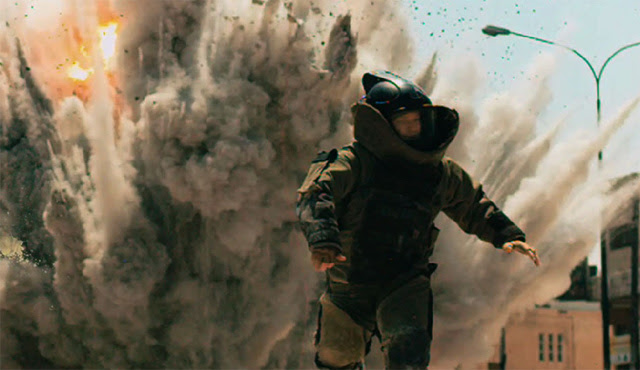 Kathryn Bigelow is pretty well unique in Hollywood. I can’t think of another woman who makes action movies, let alone makes them so successfully as Bigelow.

The Hurt Locker is probably Bigelow’s most down to Earth film, lacking both the unreal setting and events of films like Near Dark and Strange Days and the almost parodic maleness of Point Break. It is set in the present Iraq war, and tells the story of a team sent out to discover and disarm suspected IEDs (Improvised Explosive Devices). The team is led by bomb tech William James (Renner), who seems to love his job a bit too much. He’s backed up by no nonsense Sergeant Sanborn (Mackie) and young Specialist Eldridge (Geraghty). There’s no real overarching narrative, we just follow these guys in the last month of their tour of duty.

For its first hour The Hurt Locker is an unqualified masterpiece, not just the best film of 2009, but one of the best war movies ever made. Then, after a truly spectacular mid-film set piece, it collapses like a house of cards. It is very hard to generate real tension in a movie, but over and over again Bigelow has us white knuckled at the edge of our seats, because in the film’s opening sequence she has established the rules - anyone can die here. Each sequence involving the examination and deactivation of a bomb unfolds with almost unbearable slowness, the tension is like a wire, being drawn ever more straight and taut, cutting into you just a little more with each passing frame. During the outstanding sequence in which James has to disarm a bomb in a car and can’t find the activation switch to remove, my entire body was tense. I swear even my teeth were on edge. Each sequence in this first hour is like a brilliant short film of its own.  Bigelow’s style plunges you into the reality of this war in a way so visceral you are almost dodging the bullets with the team. She does this by using a gritty, handheld style. There is some shaky-cam, but it is used for a good reason, rather than to hide crappy fight choreography (as is often the case).  Bigelow moves fluidly and with assurance between that style and more composed shots. There is much to admire in the visual style of this movie, notably a gorgeous scene in which James tosses a smoke grenade, the pall from which then hangs over the entire sequence.

After an astonishing, knuckle whitening, confrontation with a house full of snipers the film seems, perversely, to lose confidence in this shapeless, but incredibly viscerally effective style that it has laid down, and attempts to impose a narrative upon itself. In an instant The Hurt Locker goes from being an unpredictable exercise in nail biting tension and starts piling on the clichés until you can see pretty much every turn of the story coming. This is also, sadly but inevitably, where the film begins to ring false. James is painted as something of a maverick, but in the second half he becomes reckless to a point that I didn’t believe his teammates (especially Mackie’s strong, resolute, Sanborn) would go along with. The war movie clichés get ticked off, especially in relation to Eldridge and the base shrink he essentially goads into riding along with the team (guess what happens to the shrink). The performances and the visuals stay strong, but the movies credibility is holed below the water line and it sinks like a stone.

It’s a real shame that The Hurt Locker doesn’t end as well as it begins, because up to the hour mark I was thinking I was going to see one of the great war films. If it had been an hour long it would have been all but peerless, but the second hour smacks of a team and a film losing its creative nerve. A terrible, terrible shame, but you should still go and see the first hour of this film.
Posted by Sam Inglis at 18:49