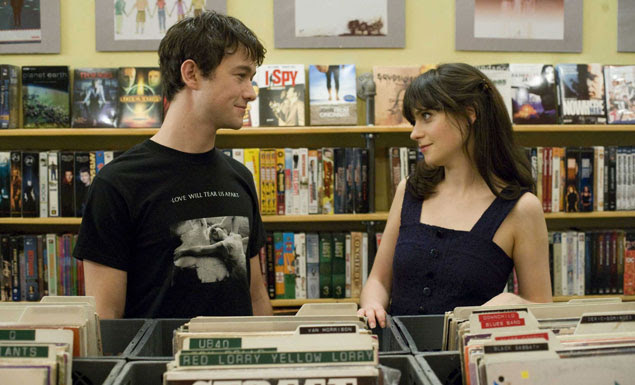 We all have our own Summer. Mine was called Tara, while watching this film I missed her.

That’s one of the (many) great things about this rather atypical rom-com; it’s a film that will provoke a reaction in any audience member, because it pricks at things that we’ll all recognise. It is designed to provoke an extremely personal response and, for me, it succeeded completely. The film stars Joseph Gordon Levitt as Tom and Zooey Deschanel as Summer, two young colleagues who start a relationship after meeting at work. Tom falls in love with Summer almost immediately, but his feelings aren’t reciprocated.

What’s best about (500) Days of Summer is that it doesn’t indulge in the usual clichés of the romantic comedy genre. You don’t get the meet cute, or the inexplicable third act break up, or the chase to the airport, or the scene where the guy makes some big, stupid romantic gesture (usually in song). Instead this film concerns itself, if not with what relationships are really like, with what they feel like and it is better at dramatising that than almost any film I’ve seen.

Pop promo director Marc Webb uses his camera pretty unobtrusively, the few directorial flourishes he employs serving to put us inside Tom’s experience of his relationship with Summer. One of the best of these moments is the dance sequence, set to Hall and Oates “You Make My Dreams Come True”, which occurs after Tom and Summer’s first night together. Another real standout moment is an extended split screen sequence showing an important party scene, with Tom’s expectations on one side of the screen and reality on the other. It’s this sequence that really captures the mix of tones that makes (500) Days of Summer work so well and feel so real. The film is sweet and romantic but it is also, at times, raw and painful.

This is an interesting choice for Joseph Gordon Levitt, who has avoided generic fare in recent years, generally to wide acclaim. At 28 he’s one of the most interesting actors working, mainly because he seems willing to go just about anywhere for a part. Here he really doesn’t have much distance to travel. Tom is a pretty regular guy, but that’s tricky, because it would be easy to be bland and given how much of the film’s running time Tom spends moping, easy to be irritating. Gordon Levitt’s performance is neither of those things. As much as you may sometimes wish to slap Tom he’s never bad company. Having put in six years service on sitcom Third Rock From the Sun Gordon Levitt also possesses finely honed comic timing and the rare ability to make a joke play naturally.

Zooey Deschanel’s kooky shtick has been this close to wearing thin of late, but she reins it in for Summer. This girl, cynical as she is, feels much more real than - for example - Happy Lolly from Gigantic. There’s not the aggressive quirkiness that she so often brings to a part and that, along with the fact that she looks like Zooey Deschanel, means that you buy Tom’s immediate interest. More than two individually fine performances it is the combination of those performances that allows (500) Days of Summer to be truly successful. Deschanel and Gordon Levitt have been friends since working together on Manic and that familiarity with one another really helps the credibility of the central relationship in this film. There’s a warmth between them that is entirely convincing and if the chemistry is never scorching, that’s entirely appropriate to the story.

The supporting cast are all fine, but the real standout is Chloe Moretz, who will have a star making part next year in Matthew Vaughn’s Kick Ass, she's excellent as Tom’s wise beyond her years sister. This could have been a trite and unrealistic part, but Moretz plays it just right.

There are only a couple of mis-steps in the film. The first and biggest is the occasional use of an omniscient narrator, who adds as little to this film as Little Children’s irritating narrator did to that one, popping you out of the story whenever he chimes in. There’s also an opening caption which strikes an inappropriately caustic tone, setting you up for a rather different film and a closing scene which feels pretty trite, particularly with its closing line. These are all small things though,  overall (500) Days of Summer is a hugely enjoyable film, one that feels unusually real. You’ll likely leave the cinema on a real high, humming something from the brilliant indie soundtrack, quoting some of the brilliant dialogue and utterly in love with Zooey Deschanel. 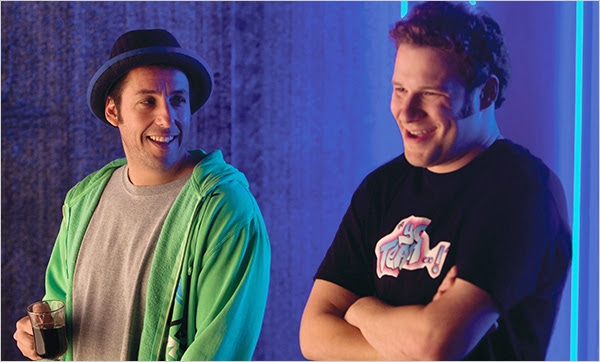 Have you seen the trailer for Funny People? Then you’ve seen Funny People. Do yourself a favour and skip the feature length version.

This is Judd Apatow’s third film as writer/director and the success of The 40 Year Old Virgin and Knocked Up has allowed him free rein. The result is a spectacularly self indulgent, masturbatory, 146-minute mess. It plays like Apatow dumping the contents of his brain onto film and then simply organising them chronologically. This isn’t a film; it’s summer camp for Judd and pals. You might think that being invited along to that would be fun, but for me it was an experience like going along for a night out with a group of people who have known each other for years and being the new guy that one person knows. It’s awkward and even when they’re laughing, you generally aren’t.

It has always been clear that somebody needs to hire Judd Apatow a strict editor, and never has this been a more urgent need than with Funny People. Just because a film is long doesn’t mean it’s bad. Hoop Dreams could be six hours long rather than the three hours it is and I’d probably still be enthralled by every frame. Funny People feels long. At times it feels endless, largely because it’s so incredibly repetitive. There are innumerable scenes, for instance, of Seth Rogen talking Adam Sandler to sleep. It’s not just the repetition though; Apatow is so evidently in love with his actors improvisations that scenes are often brutally overextended. Comedy is all about timing and Funny People’s timing is broken.

Perhaps the most glaring flaw in Funny People is that it isn’t one film. It’s two. Two films that have almost nothing in common, yet have been awkwardly stapled together because… well, God knows why. The first film is about a comedian (Sandler) who discovers that he is dying of some mysterious illness (we’ll call it McGuffin’s syndrome) and decides he wants to go back to his stand up roots, so he hires a young comic who idolises him (Rogen) to write his jokes. It’s your basic bromance, two grown men who initially don’t like each other learning to be close to one another. Of course it doesn’t work, because Sandler’s George Simmons is so repellent that you can’t understand why, even if he puts up with him for career reasons, Rogen’s Ira Wright would want to be friends with George.

George’s character is also the reason that the second film - a romantic comedy that sees him attempting to reunite with his ex-fiance Laura (played by Apatow’s shrill voiced wife Leslie Mann) despite that she’s now married (to Eric Bana) with two kids (played by Apatow and Mann’s daughters) - fails. There’s no reason to want Sandler and Mann to end up together; even when Apatow makes it clear that her husband is also a total shit he still seems a nicer guy than George. The result is that the whole film just sort of sits there, unspooling before you, yet never affecting you for a second. These people are either complete arseholes (George), shallow and dimwitted (Ira) or so idealised that you can’t take them seriously (Laura), so why should you care what happens to any of them?

Look, it’s nice that Judd Apatow loves his family and friends, but that doesn’t mean that he should get to spend $70,000,000 (how the flaming blue fuck does a movie like this cost that much?) on a glorified home movie. Apatow and Mann’s children are pretty and charming, but that doesn’t mean that we need to spend time watching home videos of one of them singing Memory from Cats. It’s like being forced to look through your friends’ photo albums; only you don’t even know or care about these people.

Even at its most basic level Funny People fails, because it never convinced me that these were funny people, even though they spend what seems like hours laughing at their own jokes. George Simmons is as amusing as punch in the face and Ira’s material is no better. The ‘highlight’ of Ira's routine is an extended bit about Tom Cruise, Will Smith and David Beckham rubbing the tips of their penises together. Which is funny because? It clearly wasn’t just me. There were some laughs in my screening, but they were sporadic and very scattered, the film very clearly missing far more frequently than it hit. I got a few laughs, mainly out of Sandler’s doctor, who is constantly compared to Alexander Godunov from Die Hard (and I’ll admit, I did roar with laughter when the doctor said Yippe ki yay mother fucker). Three or four laughs in almost 150 minutes isn’t anything like enough in a comedy though.

Funny People is a dull, uninvolving, unfunny, self-indulgent movie. It is packed with uninteresting and unsympathetic characters and it is spectacularly overlong, with little idea of what it wants to be or to say. Miss it.
Posted by Sam Inglis at 13:23