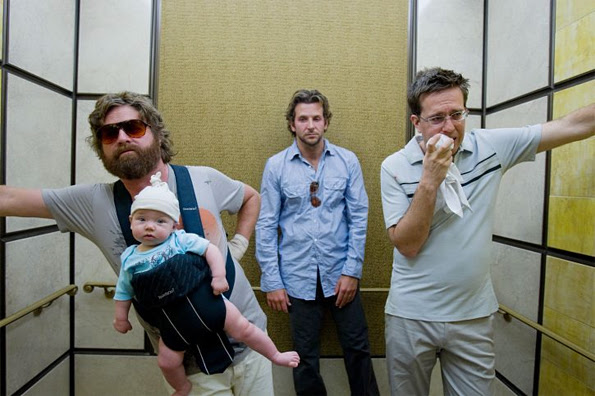 For his stag night Doug (Bartha) is taken to Las Vegas by his two best friends Stu and Phil (Helms and Cooper), with his future brother in law Alan (Galifinakis) along for the ride. The morning after they arrive Phil, Stu and Alan awake in their suite to find a Tiger in the bathroom, a baby in the closet and Doug missing. Unable to remember what they did they must piece together their evening and find Doug in time for his wedding.

I believe I’m on record about my depression about the current state of what passes, in American mainstream cinema, for comedy, and especially comedy for men, which lately has a tendency to be more offensive than it is funny. So I was somewhat surprised by The Hangover. This isn’t to say it is without very serious issues, or that I didn’t find quite a bit of it troubling, but I’d be lying if I didn’t admit that I had a smile on my face a great deal of the time, and that I did laugh. That either of these things are true is thanks entirely to one man, Zach Galifianakis, whose performance as the somewhat unbalanced, but ultimately very sweet Alan is always amusing, and provides the film both of its really big laughs. He’s in practically every scene, and there’s always something going on with Alan, always something that Galifianakis is doing, often in the margins of a shot, and that something is consistently the funniest thing on screen.

Had the rest of the film been as engaging as Galifianakis’ performance then we’d have been well on our way to a comedy classic. Sadly that’s not the case. Two belly laughs isn’t something to be sniffed at, particularly given the state of comedy right now, but over 100 minutes it really isn’t much, especially when compared against the constant hilarity of films like Ghostbusters, Airplane! and The Princess Bride, and there plenty of other things that, despite the fact you’ll seldom stop smiling at Galifianakis, mitigate against enjoying the film as a whole.

As a ‘bromantic’ comedy (for more ‘words that shouldn’t exist’, buy my upcoming book) The Hangover is trying appeal to men, which apparently means taking an objectionably retrograde view of the female of the species. There are only two women who have more than a handful of lines. The first is Heather Graham, who appears for 10 minutes as, yes, a stripper (and prostitute) who marries a very drunk Stu. Being a movie prostitute she looks like Heather Graham, and has a heart of pure gold. Her only contribution besides looking like Heather Graham and having a dazzling smile is to flash a boob for a few seconds. Ah, progress. The other woman in the movie is Stu’s girlfriend, an appalling, one-dimensional shrew played by Rachael Harris. She cheats on Stu, abuses him and is mistrustful of his every move (though, to be fair, he tells her he’s going to Napa rather than Vegas). There’s not the tiniest bit of shading to this character, she’s Satan in a dress, which means that for much of its running time The Hangover ends up saying that women are either evil or whores.

There are other truly tiresome gags in The Hangover. For instance, who decided that nudity, in and of itself, was funny. It’s funny in Forgetting Sarah Marshall’s opening scene, because it’s so incongruous, but Zach Galifianakis bottom isn’t, by definition funny, well unless you’re five. Todd Phillips is five, or so it would seem, because over and over again the film shows us wobbly bits (Asian wobbly bits, fat wobbly bits, old wobbly bits) and expects us to giggle at their mere presence. Then there’s Ken Jeong, as an outrageously stereotyped gay mobster. Didn’t this cease to be funny, or indeed acceptable, in 1986?

The cast has decent chemistry, and the guys do gel as a unit and seem like old friends. The problem is that we’ve seen this movie and, some inspired silliness from Galifianakis aside, don’t need to see it again. Todd Phillips clearly has something, his movies are crowd pleasers, and the group I saw The Hangover with liked it a good deal more than I did, but I, just as clearly, don’t get these movies. If you do then The Hangover might be the comedy of the year, for me it was not entirely unpleasant, and even occasionally funny, which does put it a cut above most current comedies, but still a far far cry from being a good movie as a whole.
Posted by Sam Inglis at 19:45