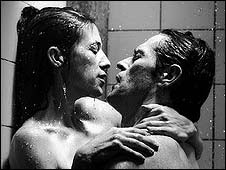 Lars Von Trier's controversy magnet Antichrist, which so divided the Cannes Film Festival (though the jury seem to have found something to admire, Charlotte Gainsbourg won the Best Actress award) and provoked Von Trier to say that he didn't need to justify himself, and that he's the best director in the world, is coming to the UK. To my genuine surprise it has managed to come through BBFC unscathed, with an 18 certificate for "strong real sex, bloody violence and self-mutilation". There are no guarantees that it will see similar treatment on DVD, so if you want to see it you'll have to seek it out at cinemas. Artificial Eye will release Antichrist on July 24th. Look for my review on July 25th.


The 2009 Edinburgh Film Festival opens on Wednesday the 17th, with Sam Mendes comedy Away We Go. Among the other films showing are the UK premieres of British films Fish Tank and Moon, Spread, the latest from Scots director David MacKenzie, Argento's Giallo, the intriguingly titled Romeo and Juliet Vs the Living Dead, a Roger Corman retrospective and there will be talks with Corman, Joe Dante and Sam Mendes. If you're going to any films feel free to drop me a review.

In DVD news Anvil! The Story of Anvil, Woodstock: 40th Anniversary Edition, Blackadder Remastered: Ultimate Edition and The Good, the Bad and the Weird are among the releases for the 15th of June. While the 22nd brings the likes of Franklyn and Spider-Man (the 1990’s cartoon) Volumes 1 and 2, among others.
Posted by Sam Inglis at 00:47