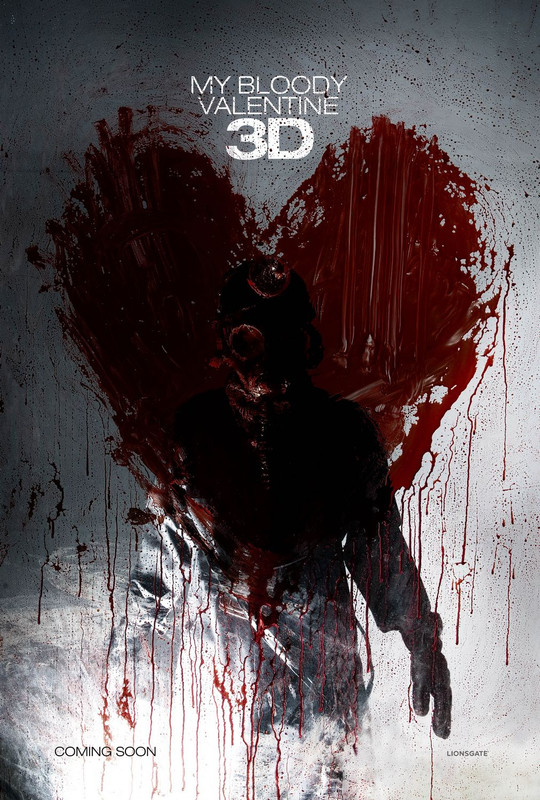 The original My Bloody Valentine isn’t a very well regarded slasher film, though a recently released DVD, which restores all the previously snipped gore scenes, may, among genre fans, do something to address that. This film may also help its cause because, even among unspeakably awful horror remakes, this one is a special kind of terrible.

I haven’t seen the original film, so I can’t really comment on how closely this one follows its blueprint, but by all accounts, the remake portion of the film is really just the first 10 minutes, which consist of a series of murders at a Valentine's night party in a mine  - because, really, where else would you go for a party? - while the rest of the (colossally overlong) running time is more a sequel than a true remake. That may go some way to explaining why the film’s title makes so little sense. Besides the opening sequence and the way the killer leaves victims hearts in heart-shaped candy boxes the connection to Valentine's Day is all but absent. For all the import the date has, all the effect it has on either the characters or the crimes this may just as well be My Bloody Chinese New Year.  The bulk of the film takes place 10 years later, when the heir to the mine (Jensen Ackles) comes back to town for the first time since the massacre, to find his fellow survivors being murdered and himself the prime suspect for his former friend (Kerr Smith) who is now the town’s Sheriff. Rumours, of course, also abound that the original killer has returned from the dead.

I like slasher movies, they’re fun despite their formulaic nature, and in the opening chapter of a franchise it’s often entertaining to see if you can spot the killer. You certainly will here, mere minutes in. It’s all so ludicrously obvious and telegraphed that you expect your suspect to be the red herring, only he’s not, this movie is just that stupid and obvious. It’s also nice to have some characters with personalities as the victims. Wes Craven has a particularly good record here, with both Scream and the original Nightmare on Elm Street boasting casts of young pretty bodies in waiting that you could actually identify with and root for, and who even, on odd occasions, said something you could imagine coming out of a real person’s mouth. Not so here. Writers Todd Farmer and Zane Smith prove unable to invest any of their, for lack of a better word, characters with anything even passingly resembling a personality, or to write dialogue that doesn’t feel like it was written by a 12-year-old misremembering dialogue from a slasher he thought was cool.

You don’t really go into a slasher film expecting Academy Award winning performances, but even so, the standard of… oh, let’s be kind and call it acting, even though reading would be a more accurate description, on display in My Bloody Valentine 3D is absolutely inexcusable. Jensen Ackles, of TV’s Supernatural, is shockingly wooden as Tom Hanniger, not only does his performance fail to deliver anything one could even charitably call an emotion, it makes you wonder whether he even knows what the word means. Don’t go thinking the rest of the cast are any better though, because the jaw-dropping non-performances of Jaime King and Kerr Smith and the pantomimic awfulness of Kevin Tighe and genre vet Tom Atkins will disabuse you of that notion fast.  It’s enough to make you want to reach into the screen just so you can slap the entire cast and yell “do it better” at them.

A glance at Patrick Lussier’s filmography reveals him as a director of straight to video crap, and My Bloody Valentine 3D bears that out with every single shot. Despite the 3D process this film is as flat and uninteresting to look at as they come. Every setup looks utterly generic, and at times (particularly one inexplicable moment in the opening sequence) the geography of Lussier’s shots flies completely out the window. Worse is that he’s got only two ideas for the murder sequences, the helmet lamp searching in the darkness and looking over the audience in a 3D effect, wheeled out four or five times, which doesn’t work once, and people getting stabbed with a pickaxe, sending, more often than not, bad CGI viscera flying at the audience. That’s it, the film never deviates from the formula (even using the shot with the lamp in a lit area, well done there) and when you’ve seen the first kill in this movie you really have seen them all.

Technically the 3D largely works. There are fewer problems with ghosting (which were prominent on the first three films I saw in the REAL-D process) and though there remains a softness to the picture and focus the previous problems with detail in long shots and on movement are reduced. What this film proves to me though, and what really makes me fear for the future of cinema, should the predictions of 3D’s dominance in the future come true, is that it’s no more than a gimmick. Far from being immersive, sucking you into the world of the film and thus scaring you more, the picture’s added depth merely accentuates the films utter lack of it. What absolutely doesn’t work is the endless array of things coming out of the screen at you. On a flat screen CG can now be photo-real, but the renderings of pickaxes, eyes, and branches, to name but a few things, that shoot out at us here are so patently fake that the 2D version is more likely to make an audience recoil from the screen. If there is any reason for My Bloody Valentine 3D to exist it is this; it offers definitive proof that a shitty movie in 3D is still a shitty movie. The process adds nothing.

Quite apart from being a remake My Bloody Valentine 3D steals liberally from other, better films. There are shots here that you’ll recognise from The Descent, Leon and Haute Tension, none of which deserve to be even tangentially associated with this retrograde piece of crap, which should be consigned to the dustbin of shitty movie history, never to be spoken of again.
★
Posted by Sam Inglis at 16:08