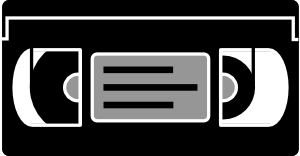 JVC stopped making video recorders in 2008, and so the death knell sounded for the format that popularized home viewing of movies. This step had been in the offing for a long time, DVD rentals outstripped VHS as far back as 2003 and the final new release tapes rolled out of factories in 2006 (A History of Violence being the final title in the US market.) In many ways VHS has lived much longer than expected; 31 years, more than 25 of them as the dominant format.

I got my first DVD player almost exactly 8 years ago, for Christmas 2000, and within a couple of years I had sold off the bulk of my then 600 strong video collection. I’ve spent those 8 years amassing a DVD collection which, discounting music titles and TV series, runs to something over 1300 titles. I’ve never stopped buying VHS though, and even when I was buying DVD almost exclusively I always had a VCR (I now have three, and should soon be getting a fourth) recently though I’ve begun to buy more and more videotapes, because their price in second hand stores has come down so dramatically that they offer an excellent way to try out a movie you’ve never seen before, or to pick up something that has never come out on DVD for an attractive price.

The UK in particular has some odd titles missing on DVD, but available on VHS; the first Addams Family movie remains a VHS exclusive as do Ken Russell’s The Devils, many of Zhang Yimou’s early films (though Red Sorghum FINALLY comes to DVD in 2009) and Peter Jackson’s wondrous Heavenly Creatures, to name a very few.

There’s also the issue, of course, of the video nasties. I love having the small collection that I’ve got in pristine digital quality, but it also somehow feels like the wrong format. As my Region 1 copy of The Beyond slides into the DVD player I think that the way I should be watching this movie, really, is on a crappy third generation dub, a tape that reflects the films (previously) forbidden nature.

As well as the hit, the cult, and the nasties, VHS had an amazing amount of oddities that will almost certainly never see the light of day again. This was largely because the major studios took a while to begin releasing their films on tape, and so independents popped up and released any old crap they could get their hands on. VHS is a haven for people like me who love movies so bad they’re entertaining, honestly, who doesn’t want to see a film with a title as silly as Invasion of the Space Preachers?

Maybe it’s just that DVD lacks a certain romance. I was 19 when I got my first DVDs, but I grew up with VHS, everything that was forbidden during my childhood was in that format. These days I have a good VHS collection, about 400 films, most of which are films I’ve never seen and decided to try out cheaply and there are a few that just can’t be had on DVD. I still love DVD, I bought 2 just before coming home to write this article, but I’ll be buying VHS as long as I have a working player.
Posted by Sam Inglis at 18:56