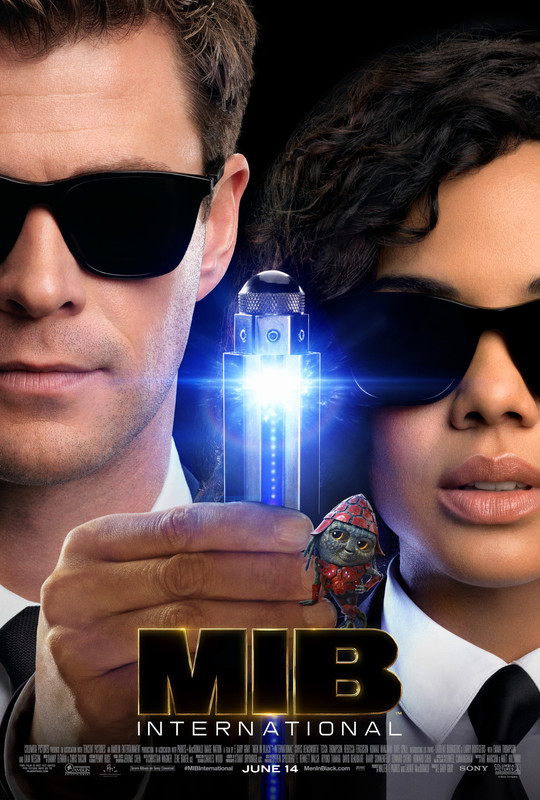 Seven years after a belated second sequel with Tommy Lee Jones and Will Smith, Men In Black is the latest property to be dredged up by the bean counters in the hopes that a familiar title will be all that audiences need to bring them back to the cinema.

The broad strokes again have a rookie (Tessa Thompson as Molly/Agent M) being led through the agency by a more experienced agent (Chris Hemsworth as H) and the two of them teaming up, despite their differences, to protect the Earth from the scum of the universe. The twist is that Molly has known about the MIB since she was a child, when she witnessed them neuralyzing her parents and has always wanted to find and join the agency. The villains this time are The Hive, an alien race that assimilates their prey, meaning they can look like anyone and that anyone could be the bad guy.

In the wake of disappointing box office, we have already heard about the many difficulties in the production of Men In Black International; the opposing voices of the studio and director F. Gary Gray; the on set rewrites, apparently including some by writers specifically contracted to the stars. The problem is, there’s no need to read those stories, the evidence of this discord is up on the screen.

The first of many problems is the screenplay. The plot is incredibly thin, throwing away potentially interesting elements like Molly’s history in favour of a twist so blindingly obvious that everyone should have called it from the trailer. Everything seems half formed, from the embodiment of the villains (played by the fantastic dance duo Les Twins, whose one scene to show off is by far the film’s most impressive moment) to the main characters. We know things about Molly, but that’s not the same as her having a personality. Thompson seems adrift in the film - she doesn’t have any jokes and her chemistry with Hemsworth, apparently so strong in Thor Ragnarok, has gone almost entirely missing. Hemsworth is poorly served. The choices made with his character - who is disillusioned and somewhat checked out - lead to a lack of energy in his performance. It’s tough to tell sometimes if he’s playing a character who doesn’t want to be where he is, or if he knows that this is going seriously wrong, and he’s just ploughing through it disconnectedly.

The whole film has a listless quality. Tab A is designed to fit into slot B, but it’s as if nobody could be bothered to put the two together. The action beats are familiar to the point of tedium. The final showdown is especially uninspired. It could have been an opportunity to unveil one final twist (there are a couple of ways to go that could have upped the stakes) instead, we get another blue beam, in what feels like an abbreviated action sequence. When things threaten to become interesting, the idea with potential is thrown away. The charismatic Rebecca Ferguson appears in one sequence and there’s a nice little twist to it. We never see her again, and that twist never plays into anything outside the few seconds it’s useful in that particular plot cul-de-sac. Instead, we get yet more of the irksome CGI alien voiced by Kumail Nanjiani.

The only notable thing about any of the work here is its determination not to do anything interesting. The writing plods along from one obvious plot point to the next, before stopping unceremoniously (if not soon enough). F. Gary Gray’s direction is generally resolute in its adequacy, without providing a single memorable image or visual gag. I’m sure nobody sets out to make a bad film, especially with a property people like, but equally, I don’t get the sense of everyone coming together to make the best of a bad job. There’s no cohesion here, just a lot of individuals chalking up another job while seeming desperately keen to move on.
★
Posted by Sam Inglis at 23:53