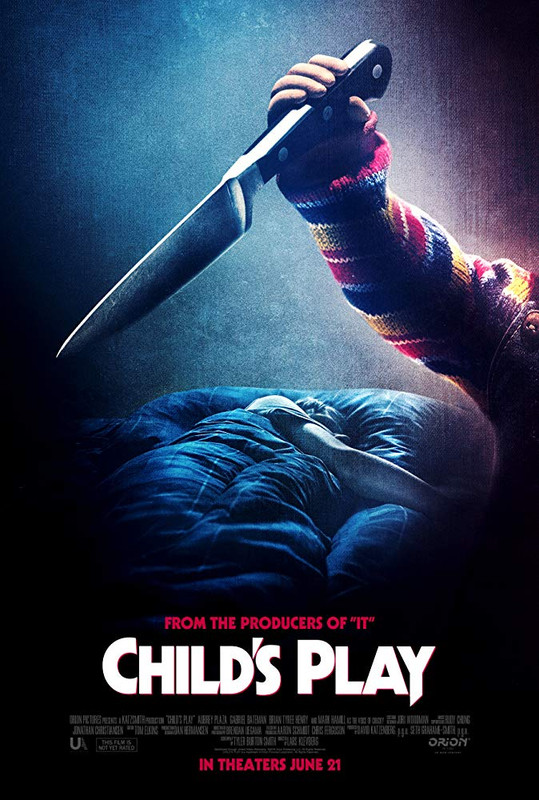 Remaking a well liked film, especially one that spawned a franchise, never comes without baggage, but this new take on Child’s Play has more than most. For over 30 years, the original franchise has been driven by one man, Don Mancini, who has written all seven entries and directed the last three. Mancini’s franchise is ongoing, with a TV series mooted for next year, but thanks to rights issues this remake was still able to be made without his blessing. I can imagine why Mancini would be enraged by this turn of events, but to evaluate Child’s Play 2019 as a film we have to step away from that and look at it on its own merits.

The broad strokes of the story are the same: Andy (Gabriel Bateman) is given a new toy, an advanced doll called a Buddi, by his mother (Aubrey Plaza). The doll turns out to be evil, and begins acting out increasingly violently against the people in Andy’s life. Where this new take departs is in the details that motivate how and why the doll - Chucky (voiced by Mark Hamill) - acts out. In the original series the doll is merely a vessel, possessed by the spirit of serial killer Charles Lee Ray (Brad Dourif), here we have tech paranoia in place of voodoo, as the doll is simply a learning machine with its inhibitions removed by a disgruntled employee.

Some of the changes make sense and work well, while others feel as though they don’t fit with the overarching story. The tech paranoia idea is a sensible way to go when looking for a new angle on the themes of Child’s Play. It brings the threat into our world in a way that voodoo possession simply can’t, representing a slightly skewed reality in the same way as the takes Black Mirror sometimes has on technology. It strains credulity a little as Chucky becomes more and more autonomous, but has some interesting ideas around unintended consequences when it comes to how machines learn without the same reasoning skills people have. There is, of course, one vast logic gap given that this Chucky is purely technological: power. Does the doll not need to be charged, does he not have an off switch that would put a pretty simple stop to his murders? The film doesn’t even attempt to paper over this crack, and it niggled at me all the way through. It’s also easy to see the logic in making Andy older (13, as opposed to 6 in the original) and having him be the central figure, as it means he can take more of the initiative when it comes to fighting Chucky. On the other hand, it’s tough to imagine a 13 year old boy becoming so attached to a doll and while Gabriel Bateman gives a decent performance, I never entirely bought into that aspect of the character, especially after he connects with a couple of other kids in the building (Ty Consiglio and Beatrice Kitsos).

Chucky himself hasn’t changed a great deal, the look remains broadly similar and the dedication to using practical effects wherever possible is welcome, especially as the limited motion helps lend a creepier edge to the doll, the way the mouth works, in particular, is off in just the right way to make it look horrifying. Unfortunately, Mark Hamill, great voice actor though he is, just doesn’t have that inimitable mix of menace and mischief Brad Dourif has brought to the character since 1988. It’s not bad work, but Hamill never makes the character entirely his own, if you’ve seen the other films the voice is likely to feel just as incongruous at the end of the film as it does the very first time you hear it. Again though, there are things that work. The Buddi song is a saccharine ditty that ends up feeling rather menacing and the neediness Hamill gives the doll (“if they don’t let us play, they all go away”) is an interesting psychotic inversion of the themes of the Toy Story series.

At just 88 minutes, Child’s Play is the right length for what is, at heart, a basic slasher movie. That running time means that some of the performances (David Lewis as Andy’s mum’s dickish boyfriend, Brian Tyree Henry as the friendly cop down the hall) end up a little underdeveloped, but that’s to be expected. Aubrey Plaza doesn’t entirely get to cut loose, but she brings enough personality to lend a little colour to what could have been a very boring mom role. As a slasher, the film delivers the red meat fans will want to see. The violence is brutal and bloody, in some cases - an ongoing gag with a severed head, which is one of the film’s best and nastiest - likely skirting very close to the line between 15 and 18. There’s nothing wildly new or inventive in the kills, but like everything else in the film they are executed with gusto and some measure of style by director Lars Klevberg (making his feature debut).

Child’s Play is the very definition of a mixed bag. It’s often good fun and gets in and out quickly enough, while laying just enough ideas under the gags and the gore to leave you some things to think about as you leave the cinema. On the other hand, some of those ideas hurt the film when you question them, because it’s clear the script hasn’t explored them in any great depth and, while it’s by no means a disgrace, nor the original any sort of classic, for a certain section of fans this film will simply never stack up to their memories of the original. Overall, it’s good enough for a night out with mates, but I’m not sure it will endure like Mancini’s series has.
★★½
Posted by Sam Inglis at 11:34