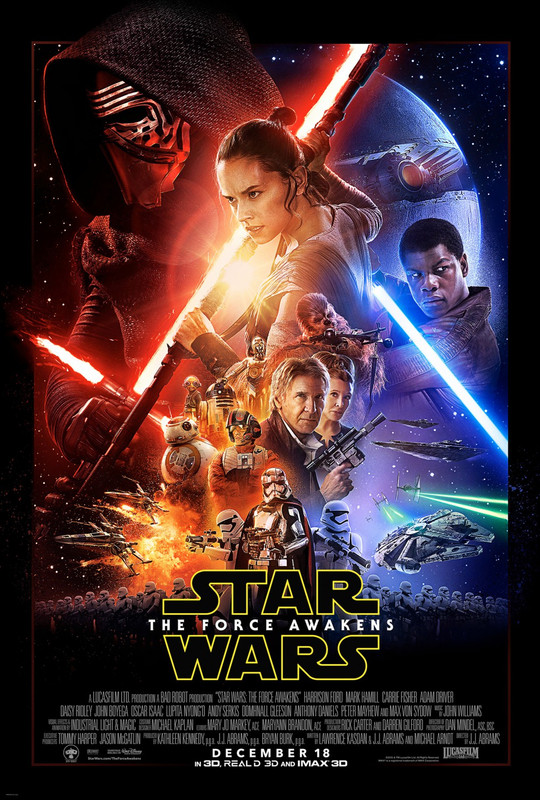 I'm not a big Star Wars fan. Like most movie lovers born post 1977 I did, to some degree, grow up on the original trilogy, but these days those films - much as I respect The Empire Strikes Back - hold little importance for me. The relationship I had to them last time I saw them was like meeting an old primary school friend for the first time in twenty years and realising you don't have much to say to each other anymore. It's not that they're suddenly bad films (well, except Jedi, though I reject the word 'suddenly' there), but they have no great relevance to me any more.

Given this, I was entirely ambivalent about seeing The Force Awakens; the seventh chapter of the saga and the first to be made without any input from franchise creator George Lucas. Ultimately I saw it because it was the screening that fitted into my day at the cinema.

The film picks up 30 years after the events of Return of the Jedi. Luke Skywalker is missing, presumed (in some quarters) dead and a new power; The First Order has risen in place of the Empire. Early on a stormtrooper, soon renamed Finn, (John Boyega) abandons his post and he, a scavenger named Rey (Daisy Ridley) and a droid called BB-8 become targets for Kylo Ren (Adam Driver), the most powerful Jedi in the First Order. This throws them into an adventure that also involves many of the characters from the original trilogy.

The good news is that if you're a Star Wars fan then I imagine that The Force Awakens is everything you'd ever dreamed it would be and then some. At the very least, even for a non-fan like myself, this is largely a very entertaining and engaging film, one that deserves to sit near the top of the pile in the franchise. It is, however, flawed in a lot of ways.

Let's start with the good stuff, because for the first time in the recent history of the franchise, there's plenty to say. The film gets off to a flying start. Minutes in we get our first glimpse of the First Order in action, with Kylo Ren and chrome suited Stormtrooper commander Captain Phamsa (Gwendoline Christie) established in short order as a credible and serious threats. All of the new characters are introduced well, with Boyega's conflicted Stormtrooper immediately signaling something more morally interesting about this entry. In a franchise that has often tended to draw good and bad as two sides of a coin, the moral uncertainty of this character, and perhaps another, is solid new ground to tread.

After the text crawl (no mention of taxes), the film is on rails for a while. The first 45 minutes are breathless. Abrams introduces new characters quickly, trusts us to read their place in the film's world, and spends more time giving them at least a semblance of depth than setting the pieces. The action also flows well during this time, with large scale scenes like the opening first order attack complemented well by smaller beats such as Rey and Finn's first meeting.

By this time we've already established that Rey has been fending for herself in the deserts of Jakku for some time, but here we also see that she can fight and we soon learn that she is also skilled with machines and can fly a spacecraft. This combination of skills has led some to see Rey as a Mary Sue. I've always seen this as describing a character with little or no personality who magically saves the day and is there as a blank for the audience to pour themselves into in place of a main character with actual traits. These characters are prevalent in YA cinema, but Rey is not one. Her strength and intelligence come through in Ridley's performance from the off, and her growth in confidence is both organic and well played. Her saving the day on Jakku comes across as something she digs into herself and finds the resources and confidence to do. That is a plot point, of course, but her growing abilities add to her character rather than serving as a replacement for it. Her very growth is also how she's no Mary Sue. They don't have to grow at all; the story already thinks they're perfect.

The best part of both this first act and, for much of the running time, the film as a whole is the chemistry between Boyega and Ridley. Boyega has a magnetic screen presence and as Finn grows in character the mutual connection between him and Rey becomes more powerful and better played with each scene. I found myself invested in their friendship and in the way it grew through the action. To go into much of this would be to stray into spoiler territory, but I love the way the plot turns towards the end of the film, definitively away from any damsel in distress trope.

Adam Driver (and his costume designer) manage a menacing turn as Kylo Ren, which Driver sometimes, fascinatingly, turns into an immature petulance which is frightening in a different way than Darth Vader ever was. Vader was all control, Ren might fly off the handle at any time and that makes him a true threat.

However, not all of the new characters work. Captain Phasma, cool as she looks, is sadly underused and almost literally tossed away in the third act and Lupita Nyong'O's Maz Kanata, while no Jar Jar, is a rather weightless CG creation and exists only as an expository prop, otherwise a rare quality here.  The true disappointment comes from two of the other lead villains. The all CG Supreme Leader Snoke (Andy Serkis) is by far the film's worst effect, and holds little character or menace, while Domhnall Gleeson, as General Hux, pushes the boat out so far in his Nuremberg inspired speech that for me he inspired sniggers rather than unease.

When it's forward looking, seeking out the future of the franchise, The Force Awakens counts as one of my better and bigger surprises of 2015. Less so when it looks back. In a way it does this constantly; the shape of the film is so close to that of A New Hope that it sometimes feels like a remake. However, it's when the film really starts trying to hit the nostalgia buttons that, for me, it loses something.

Harrison Ford's Han Solo has by far the most screen time of any of the returning characters. Ford has seemed, for some time now, to be tired of the film business and to be in it solely for the clearly absurd amounts of money. He's more animated here than he's been for a while, the character fits him like a rumpled suit and that, along with the weariness we sometimes feel from him, works for Han. What works less well is his introduction, which gives us a long setpiece that goes nowhere and never pays off, it seems only to be there to give the leads of The Raid a cameo. Han's scenes also lean a bit hard on the callbacks (as does much of the stuff with the old characters), though never to an extent that would exclude newcomers. Having Han and the other old characters does serve to accentuate just how closely, almost beat for beat, the film hews to A New Hope, and over 30 years you'd have hoped to see perhaps a little more evolution in Han and Leia (a returning Carrie Fisher). A plot twist I can't give away, though it's not at all unexpected, adds a little depth and gives us an outstanding scene late in the film, but otherwise I found Han and Chewie much less engaging than the new characters, especially now that we have Oscar Isaac, in a charismatic turn as heroic pilot Poe Dameron.

The similarities to A New Hope become problematic in the third act. The final dogfight scenes, impressively realised though they are, feel like we've seen them before, so similar is the goal and even the methods to those we saw in Episode 4. I found myself groaning inwardly every time we cut away from Ren, Finn and Rey to go to the aerial battle.

JJ Abrams largely does a good job behind the camera. Usually I might say that a director failing to stamp his visual authority on a film was a problem, but in Abrams case it's a blessing, His beloved lens flare, which so marred Super 8 and both his Star Trek films, is almost entirely absent here, instead he surrenders to the look of the world of Star Wars. I always felt that the series' best aspect was the production design, and The Force Awakens is no slouch in that department, weird and wonderful creatures abound and the costume design, especially the intelligent updating of the Stormtroopers and Kylo Ren's instantly iconic mask, is superb throughout. That said, I'm not sure why people are going so nuts about BB8, it's just R2D2 crossed with a beachball. Abrams only drops the ball occasionally, but the slowdown of the second act, especially the long interlude with Maz Kanata, is disappointing after the relentless first 45 minutes. There are probably ten minutes that could be tightened here to bring the film, pre credits, under two hours.

Abrams seems acutely aware of what the fans will want and he goes out of his way to try to give it to them, both in what he includes and what he excludes. The slapstick comedy of the prequels and the dramatic tonal shifts it caused are largely absent. There's no equivalent to Jar Jar Binks, no discussion of trade routes and blessedly limited exposure to C3PO (though he is still teeth-grindingly irritating when he appears). I think he's achieved what they will want him to have achieved, and that's all you can ask of him, other than a closing shot to send shivers of anticipation up their spines. He's also got that.

For me, The Force Awakens isn't a triumph, but it's a lot better than I expected and the best entry in the franchise bar The Empire Strikes Back. I think its flaws feel deeper for me because Star Wars just doesn't mean to me what it does to many people. Feel free to add a star to my grade if it does to you (I came close to doing so myself). I do, however, understand what fans see in this film. Much of it is a great entertainment and more than that it respects the series and the people who love it. The Indiana Jones series is for me what Star Wars is for the crowd this film is for and so I'll close with this: If Indiana Jones and the Kingdom of the Crystal Skull had recaptured this much of what was good about the original trilogy, I'd have been ecstatic.
★★★
Posted by Sam Inglis at 21:07