I've made a few edits, but this is largely the review I wrote on seeing Casino Royale on its cinema release. 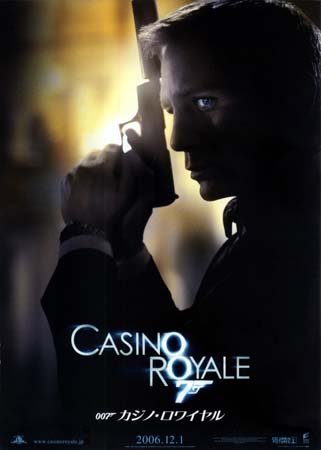 Newly promoted double 0 agent James Bond (Daniel Craig) is sent by MI6 to play in a high stakes poker game against terrorist banker Le Chiffre (Mads Mikkelsen). He's to make sure Le Chiffre loses all his money so he'll have no chice but to seek asylum from Britain.
Along for the ride is treasury agent Vesper Lynd (Eva Green) whose job is to protect the money Bond is playing with and for whose charms Bond falls fast.

I wasn't optimistic about this one at all. I'm not a big Bond fan and I'm even less of a Daniel Craig fan. The criticsm when he was hired was about Craig's hair... James BLOND yelled the tabloids when, having seen the man 'act' before, I thought James BLAND was much more of a worry.
However reasons for optimism did begin to mount up. The recruitment of such strong talent as Mikkelsen, Giancarlo Giannini and, in a small role, Jeffrey Wright. The breathtakingly beautiful Green as a Bond girl. Most importantly, though, this was not merely to be the next Bond film, it was a complete reboot of the franchise.

Let's get a few things straight. This isn't really a Bond movie. It's got the girls and the action but so many of the trademarks are missing. Gone are the horrible puns about girls names ("I thought Christmas only came once a year"). Bond's drink order is also different ("Shaken or stirred?" "Do I look like I give a damn?"). There's no Q, no megalomaniacal supervillain in a hollowed out volcano. All in all this feels more like Jason Bourne than James Bond.

The script is pared down. For the first half of the film Bond says next to nothing as we the audiences get to gorge ourselves on action sequences. This is where one of the more major changes in the franchise shows itself. While still grandiose and show-offy the action feels more real here than in previous franchise entries. There's no powerboats down the thames, just feet and fists. The free running sequences (executed with panache by Sebastien Foucan) are stunning, injecting pace and danger into the opening of the film where there could merely have been dry setup. There's a lot of setup needed to get us to the titular Casino Royale and this is where the screenplay, by Neal Purvis, Robert Wade and Paul Haggis, comes good. The plot machinations could be slow but they find ways around and get some great scenes out of it, most notably a moment when Bond breaks into M's (Judi Dench) house. What's really well handled though is the immediate build up to the poker game, beginning with the introduction of Eva Green as Vesper Lynd. Most Bond girls have been characterless sex objects, not this one. The script gives her real intelligence and wit and Green sparkles. Witness the lovely scene where she and Bond first meet. The sparks fly around some quick witted flirting, though the two don't really like each other just yet.

So what of the main players? I've never liked Craig, as an actor he's always seemed to me to be robotic and act merely by saying one bit quietly and another bit LOUD, more or less randomly. This is as good as he's been and perhaps it's that he's found a role that fits him. Bond is an all but emotionless killing machine, it's surely not co-incidental that the passages where Craig is found wanting are when we are supposed to be feeling and investing in a genuine emotional connection between him and Green. Better is Mikkelsen, a great actor, who has fun as Le Chiffre but never lets his performance become pantomime, as so many Bond villains have. However this is Director Martin Campbell's show all the way. From the stark black and white opening, to the unrelentingly grim torture sequence and the massive final set piece in Venice he's got a firm grip on the reins and knows that he's going for realism and weight more than ever before in Bond.

All this mountain of praise isn't to say that there aren't problems with the film. The poker game itself is too drawn out, the match ups must take 15 minutes of screentime and though it's spread out the pace can't help but flag. There's also a 15 minute segment of Bond and Vesper's relationship, which not only slows the film to a crawl but, criminally, rings false. Another problem is the lack of an ending. As the credits roll you'll have been entertained but little has been achieved and no sense of closure is felt. It also bears mentioning that the product placement in the film has reached all but unbearable levels. As if visual plugs for Sony phones, Ford cars and Sony laptops weren't enough there's what may as well be an ad for Bond's watch inserted into the dialogue. These are all small things, but all distracting. However, on the whole, as absolutely empty nonsense goes, this is about as entertaining as it gets
Posted by Sam Inglis at 14:43