Mendes’ latest seems to be the flipside of January’s Revolutionary Road. While that film featured searing performances, and exposed a failing marriage in a way so raw that the whole film felt like an open wound, Away We Go is an (ostensibly) amiable little film about a happy couple taking a roadtrip. That’s the problem, the central couple don’t change one iota during the story, and that makes them rather dull company.
In an extremely episodic film they travel round America, dropping in on various friends, all of whom turn out to be absolutely awful people. This is supposed to be funny, but ends up simply being annoying, as the performances are so shrill (especially that by the usually wonderful Alison Janney) and the characters so intensely horrible, that you spend the whole film actively wanting to get away from everyone in it.
Away We Go is a smug, annoying film, with smug, annoying characters and performances and a smug, annoying soundtrack to match. Run away. 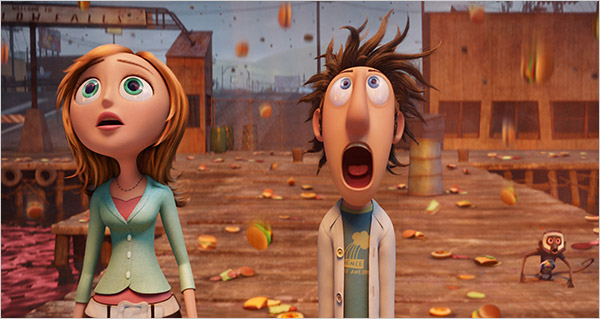 Even before the film had really started, I was a little bit in love with Cloudy With a Chance of Meatballs, because its opening credits read “A film by a lot of people”. That spirit - witty, slightly anarchic, but also very sweet - epitomises this excellent film. Based on a children’s book, which I assume is better known in the US, Cloudy is about Flint Lockwood, a backyard inventor whose creations never quite work (we see several in a very funny early montage). Until, that is, he creates a machine that turns water into food, and is able to make meals rain down on his tiny hometown three times a day.

Cloudy is a very silly film, but in the Monty Python, rather than say the Michael Bay, mode of silly. There is a joyous abandon to this film. The jokes come thick and fast, and most stick because they aren’t predictable. This slightly twisted humour permeates every frame, with side jokes all over the place and a beautifully developed sense of the absurd. Even the running gags (such as the monkey thought translator fitted to Flint’s pet monkey) work because the timing is spot on and there’s enough variety and what is done with those running gags to keep them funny.
Strong vocal performances by Bill Hader as Flint and the irrepressible Anna Faris as his weather girl love interest make the romantic subplot play, while the brilliant work of Neil Patrick Harris (as Steve the Monkey) and Mr. T (as the local policeman) keeps the laughs coming. The 3D process adds nothing, but however you see it, Cloudy With a Chance of Meatballs is one of 2009’s finest films. 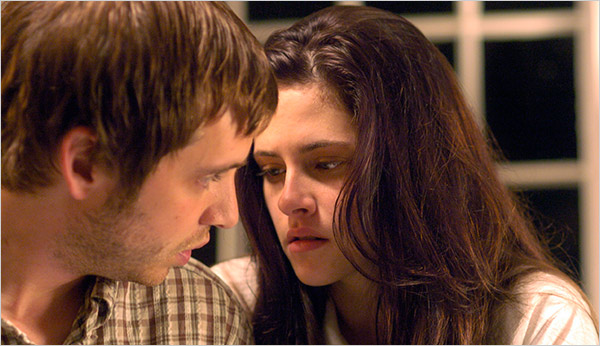 Actress Mary Stuart Masterson’s directorial debut looks nice enough, and is admirably seriously intentioned; sadly she’s undone by a screenplay and performances that belong to an especially poor disease of the week TV Movie. This probably shouldn’t be a big surprise, what with Kristen ‘I only have two expressions’ Stewart playing the lead role. Stewart does seem to be working hard here, her character has a wasting disease of the muscles, and her physical work isn’t bad, but Stewart’s face and voice remain resolutely inexpressive, even when she should be projecting deep, raw, emotion.
The rest of the cast either under (Aaron Stanford) or over (Bruce Dern) act their roles, resulting in the feeling that every actor is appearing in their own little movie. I got the feeling that either Masterson wasn’t able to control her cast or that she was more interested in her visuals. The Cake Eaters is dull, poorly acted, emotional pornography.

Infamous from Sundance 2007 as ‘the Dakota Fanning rape movie’, it’s probably unsurprising that Hounddog has had trouble securing a wide release, not only because it is ‘the Dakota Fanning rape movie’, but also because it is completely awful. You have to give Dakota Fanning her dues here, she’s outstanding in a very tough role, but the film around her starts out silly, and then lurches further towards unspeakably stupid with every passing frame.
The big problem is director Deborah Kampmeir. She clearly has a thing for snakes, and is using them here as symbolism. By which I mean that every time something bad happens, there’s a snake, and when things get really bad, there are snakes EVERYWHERE, including crawling all over Fanning. She’s also clearly obsessed with the titular song, which appears over and over again, frequently sung by Fanning. If you only learn two things from Hounddog they are: Deborah Kampmeier never met an obvious metaphor she didn’t like and Dakota Fanning should never, ever, under any circumstances, sing.

Ghost in the Shell 2.0 is an odd undertaking. Not quite a remake, but also more than a simple remastering. Ghost in the Shell remains an intelligent and exciting sci-fi movie, and actually it seems to be more and more relevant as time goes on, but this revised version isn’t entirely a success. The new animation is breathtaking, but it sits a little uneasily next to the original cel animation, which still makes up the bulk of the film. In several sequences the film cuts between the new CG renders and the original cel animation, and the difference is jarring. I also wonder what the point of re-recording the dialogue (at least for the Japanese track) was. The major difference is that the antagonist now has a female voice to go with its female body, but for me that actually removed what was an effective incongruity in the original version. Ghost in the Shell 2.0 is, then, more an intriguing companion piece to the original than it is a replacement for it.
Posted by Sam Inglis at 12:25