Like The Dream Master before it, this fifth Nightmare has a decent central idea. This time Alice (a returning Lisa Wilcox) is pregnant, and Freddy is able to use the dreams of her unborn child - somehow - to infiltrate into the world when she and her friends are awake. You could almost call this inspired: the enemy quite literally within, and Freddy making the ultimate invasion into the body and consciousness of his nemesis. Unfortunately this fine idea is wrapped up in a near totally incoherent movie, which lurches from set piece to poorly executed set piece with all the grace of a 20 stone man attempting to do ballet.

The problem is that, again, it’s all too clear that the storyline is an afterthought, the least important aspect of a script whose real purpose is to provide Freddy with more opportunities to make winking wisecracks as he kills. Most of these sequences are as bereft of scares and inspiration as they are laughs, but one manages to be surprisingly effective. One character is, for no reason really, a comic book fan and so he’s sucked into a comic for his dream sequence and in a very cool touch he becomes a drawing and when Freddy kills him all the colour drains out, of course even this is undermined by a terrible one liner (Freddy: Told you comic books was bad for ya!)

As with The Dream Master, Freddy is the biggest problem with this film. Drop the ‘comedy’ and you might have something here, but with it the tone of the film is massively confused and Freddy lacks any value as either villain or bogeyman. It is easy to tell that the film was shot and edited in just 8 weeks. The performances are awful all round (Robert Englund looks like he wishes he were dead) and some of the cutting is really dreadful. Most of all though the trouble is that the film makes absolutely no sense, it’s just a bunch of scenes, there’s no sense of a progressing story and even if there were, the characters are all so bland that it wouldn’t matter, because why would you care?

The Dream Child should be a better film than it is, and the fact that it is so bad is purely a matter of greed. If someone had taken some time with this film, with this idea, it could have been one of the best of the series. Oh well, next time, right? 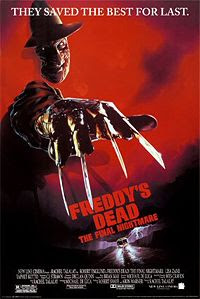 You thought The Dream Child was bad? You thought it couldn’t get worse then Freddy’s Revenge? You were wrong, bitch. Once again a Nightmare film begins promisingly, this time with a caption: "Do you know the terror of he who falls asleep? To the very toes he is terrified, because the ground gives way under him, And the dream begins... ” - Friedrich Nietzsche. Amazingly, just 10 seconds later, all hope of a good film is pretty much lost, when that card is followed by this one: “Welcome to prime time, bitch” - Freddy Krueger. Kill me.

Even at their very worst, the previous Nightmares all had something interesting about them - a cool death scene here, an inexplicable homoerotic subtext there - Freddy’s Dead doesn’t. This abominably terrible film plays like somebody saw the worst stand up routine in history and decided to chop it up and insert it, line by line, into one of the worst horror films ever made. How bad is this film? Well, Pirates of the Carribean: At World’s End isn’t the worst film Johnny Depp has been in, or the least coherent.

Where to begin? How about with Freddy? His first appearance in this film has him dressed as witch, riding a broomstick and saying: I'll get you, my pretty! And your little soul, too! That, sadly, may be one of his best one liners in this film. The other really sad thing about Freddy here is how awful he looks. David Miller returned to do Freddy’s make up, but was constrained to sticking with the commercial look established in Nightmares 4 and 5. The results are shocking. Freddy looks like he’s got egg on his face literally as well as figuratively. The effect is comical rather than horrific; indeed it’s the only funny thing in the film.

The acting is spectacularly terrible. Englund appears tired and bored; if he’s not actually reading his lines from cue cards then he’s doing a very good impression of someone who is. It sometimes seems as if the film has been written to give Englund lots of screentime, but as little as possible to do. One endless sequence sees him attempting to kill a victim through a video game, which allows Englund to spend about ten minutes just sitting in a chair cracking abysmal jokes. At times the film resembles a cartoon, especially when Freddy pops up on TV and hits Johnny Depp in the face with a frying pan. So, it’s like a bad stand up set, like the worst Looney Tunes ever made, what it is never like is a horror film. The other performers are barely worth discussing, except to note that I think Lisa Zane spent the entire production of this movie in a coma, and that Breckin Meyer was indeed always that irritating.

Director Rachel Talalay had worked in some capacity on all the previous films, so it made sense that she be given her shot at directing. The results are just embarrassing. Her best shots are solidly uninspired, but her worst are absolute abominations - check out the stunningly awful shot that rotates around Freddy and Lisa Zane endlessly, first in one direction, then another - it’s a shot that says ‘I’ve seen the prom scene in Carrie, look, I can copy it’. I’ve never seen the 15-minute last reel in 3D, but it’s all stuff pointing awkwardly at the screen. Freddy’s Dead is a hideous film to watch, because it is poorly shot, and because the editing is like a 90-minute car crash.

This really is one of the worst horror films I’ve ever seen.

After six films in seven years, Freddy Krueger was pretty worn out. He’d gone from being a hideously burned ultimate bogeyman to a slightly melty-faced ‘comedian’ who killed. His creator, Wes Craven, had deserted him after being re-written on the third instalment, and, he felt, cheated out of a piece of the huge financial reward that New Line Cinema had reaped on the back of his work. New Nightmare came out of a discussion with New Line boss Bob Shaye, in which those money issues were addressed and Shaye asked Craven if he’d like to write one more Nightmare, saying that New Line ‘feared they had killed Freddy off too soon’.

The result is one that rewrites the rules of franchises. Artistically speaking returns are supposed to diminish as a series goes on, the seventh film in a franchise is not supposed to be the best. It just doesn’t happen. Except in this case. Craven ignores all the previous sequels, and instead reduces them to fodder for a film that is all too seldom given the credit it deserves as a truly groundbreaking piece of horror cinema.

New Nightmare takes place in the real world, and stars many of the key talents behind the series as themselves. Craven’s clever script posits the idea that Freddy was, in fact, an ancient evil, and that in creating Freddy he had trapped that evil inside the story of the Nightmare films, but now that the films are over that evil is attempting to escape, in the form of Freddy, into the real world. The one barrier? Heather Langenkamp; to escape, Freddy must defeat the actress who played the character who twice defeated him - the first to do so. Craven melds fact and fiction to brilliant effect. Langenkamp, John Saxon, Robert Englund and Craven all play themselves, and Langenkamp’s storyline is, to a degree and with her permission, drawn from her real life, in which she was stalked and telephoned by an obsessed fan, and is married to a special effects artist. This is very evident in Langenkamp’s performance, which is brilliant, especially as she becomes more and more unhinged as the film goes on.

Craven also resurrects the true Freddy Krueger. Here he’s genuinely frightening for the first time since the third film, and his make up is completely re-designed, again by David Miller, and the splitting skin look that he’s been given is really creepy, Miller regarded it as the definitive version, and up to this point I’d be inclined to agree with him. What really makes Freddy scary again though is Robert Englund’s performance; the actor really recaptures the utter evil of the character, and there are several genuinely scary sequences here, not least a brilliant reprisal of Tina’s death from the original film, only this time with Freddy visible as he kills Heather’s son’s babysitter (Tracy Middendorf). The whole film looks great, with the huge set for ‘Freddy Hell’ being especially impressive, along with some extremely memorable sequences with Freddy, not least when he appears in the sky, picking up Dylan (Miko Hughes) on one of his claws.

Craven really cuts loose with this film; it’s a confident, intelligent piece of work that he hasn’t come close to matching since. Scream got a lot of credit for introducing postmodern horror, but Craven did it first and best with New Nightmare which, as well as being gripping and scary, deconstructs both the horror genre and, through a doctor character, the rush to censorship. I wish Craven would get back to doing something this interesting with the genre.

Freddy Vs Jason exists in a strange limbo. It doesn’t really belong to either the Nightmare franchise or the Friday the 13th franchise, and yet it is completely bound up with them. I wasn’t going to include it in this round up of the franchise, but on re-watching it I found it such an enormously fun guilty pleasure that I felt I had to cover it briefly.

I couldn’t claim that Freddy Vs Jason is a good film. The script is ropey, the characters are cardboard cutouts, the plot is beyond silly, and the acting is shockingly poor, all I know is that I enjoy the hell out of it anyway.

I think the key, at least looking at it as a Nightmare film, is that it has a respect for the history of the franchise (see the references to Hypnocil, established in Dream Warriors) and that, at last, it manages to square the circle of making Freddy both evil and funny. This is what Nightmares 4, 5 and 6 would have been like if they had worked. Freddy still has a cruel streak mile wide, but that is complemented, rather than leavened, by his jokes. It also helps that the make up has again been refined, and I think this is the best Freddy has ever looked.

Ronny Yu’s visuals are stylish and imaginative, making the violence as beautiful as it is brutal (witness Jason, on fire, stalking kids through a cornfield). There’s such viciousness to this film, and unlike most of the Elm Street sequels, it doesn’t shy from the bloodier images. Freddy and Jason tear literal chunks out of one another in a series of really painful looking fights. This may be a dimwitted film, but I challenge any fan of either franchise to fail to enjoy it.
Posted by Sam Inglis at 16:10