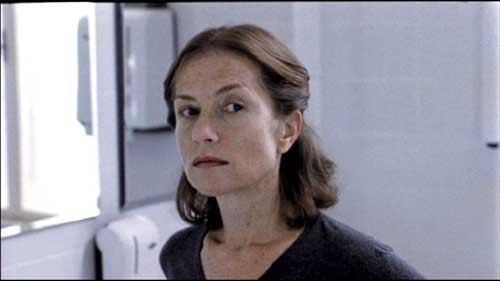 Michael Haneke’s The Piano Teacher won its star Isabelle Huppert (who appears in every scene in the film, and perhaps 90% of the setups) her second Best Actress award at Cannes, as well as several more festival awards and a European film award. The surprise isn’t so much that Huppert won awards, for she is an exceptional actress, but The Piano Teacher is not a film that screams award season glory. I’ve seldom seen a colder, darker film. If the extreme nature of the movie itself weren’t enough the fact that Huppert’s performance is so understated should have done for her chances, awards bodies tend to notice big, bold ACTING, and there’s none of that in what Huppert does in The Piano Teacher.

Huppert plays Erika Kohut, a pianist in her late 30’s who teaches at a musical conservatoire in Vienna. She lives at home with her domineering Mother (Annie Girardot). At a recital she meets Walter Klemmer (Benoit Magimel), a young man 20 years her junior. Having fallen for Erika, Walter arranges to have lessons with her, and pursues her at every opportunity, but when he gets what he’s wanted Walter is deeply troubled as Erika reveals her sadomasochistic fantasies to him. For most of the film Erika is an extremely passive character. She’s used to hiding everything behind a mask that, to the world at large, has never slipped. Her total lack of outward emotion is even seen at what should be a moment of abandon as she watches pornography in a private booth at a sex shop, but even there she stays literally and metaphorically buttoned up. This is perhaps the hardest thing an actor can do. They have to communicate every ounce of emotion their character is feeling to us the audience, but without ever making us think that the other characters in the movie are able to see what’s going on beneath that fragile, but rigid, surface. That’s something that Huppert does perfectly. She’s especially outstanding in the scene in which Klemmer auditions to be in her class, with tiny variations as she listens to him play telling us more than any dialogue - even an interior monologue - ever could.

In a later scene (watch it above) Erika sees Walter bonding with a young female student at a concert rehearsal. Jealous, she retreats to the cloakroom and sabotages the girl’s coat, breaking a glass and putting the fragments in her pocket. The action, though, isn’t the most interesting part of this scene, because it is here that we really get to see just how much is going on in Huppert’s performance, how she is acting with her every muscle. When she enters the room Erika sits down, her back to camera, trying to decide what to do, and it’s here that Huppert amazes me, because she’s still acting - every flicker of movement, every flex of a muscle, the turn of her head, it all gives us the process. In its own way this shot tells us as much about what Erika is considering as a shot on her face would. It is astonishingly good and subtle screen acting from a woman who clearly completely understands the craft.

Above is my favourite scene in the film. Here Walter is reading a letter Erika has given him; outlining in minute detail the exact sadomasochistic acts she wants him to perform on her. Huppert is sensational throught this scene, but for me the great moment comes when Erika pulls a box out from under her bed, and begins laying out her S and M toys for Walter. The selection process, the care with which she lays them all out, the way she looks to him for approval, it is as if Erika, after being so completely, icily, controlled the rest of the film has reverted back to being a little girl. This is an odd scene in the movie, it is an unusual mix of blackly funny and deeply, deeply sad, both of which come from Huppert’s beautifully judged performance.

I could write about many more scenes here, but I wouldn’t want to spoil this great film or the performance that is its very centre. The Piano Teacher is a rich, dark treat and Huppert’s performance is probably one of the three or four best I’ve ever seen on film. Discover it now if you haven’t already done so.
Posted by Sam Inglis at 20:14