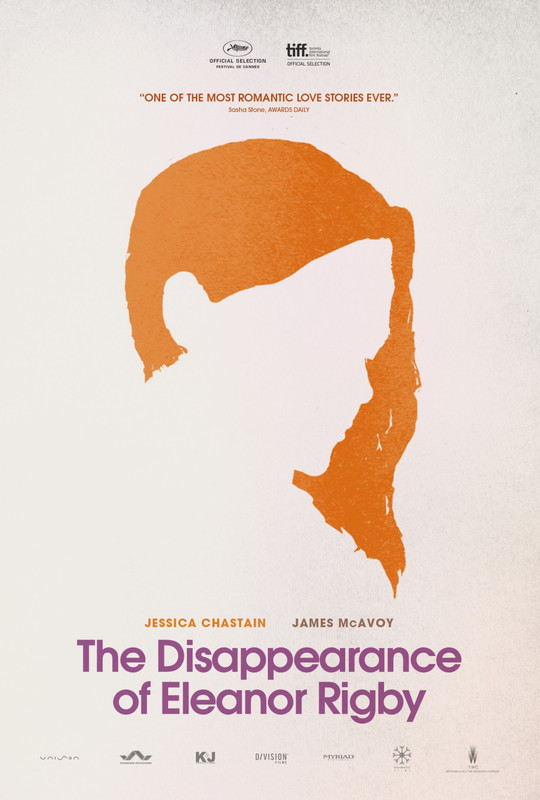 Ned Benson's feature début sounded hugely ambitious the first time I heard about it; a story about a marriage in crisis told across two features, Him focusing on the husband (Connor, played by James McAvoy) and Her concentrating on the wife (Eleanor, played by Jessica Chastain).  It sounded challenging, with a three hour running time and shared moments echoing slightly differently depending on which film you saw.  A tough sell then, but I don't believe the answer to that tough sell is this combined version, which dumps the novel structural conceit and feels terribly conventional as a result.

The Disappearance Of Eleanor Rigby: Them opens with Eleanor attempting suicide, we don't know why at this stage, but it also becomes clear that she is separated from her husband, who is running a struggling restaurant with his best friend (Bill Hader).  Eleanor stays with her parents (Isabelle Huppert and William Hurt) and her younger sister (Jess Weixler), takes a class at the local college and tries to get back on an even keel.  Connor tries to keep his business afloat, relate to his father (Ciaran Hinds) and get his wife back.

The problem with this film is that practically everything has been seen more than a few times before.  As drama, there is little to mark Connor and Eleanor's story out from any other film about a couple going through the wringer in the wake of a tragedy and while the side characters add some colour to the film they don't have anything to do that isn't in relation to Connor and Eleanor, meaning that they always feel more like story props than they do people.

There are ways to put a new spin on an old story, but without its structural gimmick Eleanor Rigby seems not to have any.  The side characters are especially guilty of speaking almost exclusively in trite clichés, and the fact that the film often has them say something like 'this is such a lame way to put this' doesn't excuse that fact.  Note to writers: if you have to have multiple characters apologise for their own dialogue you may wish to have another crack at at least some of those lines.  Talking of cliché, Ned, maybe you could have just ONE shot in which Isabelle Huppert isn't holding a glass of wine, especially as, in this version at least, you never acknowledge that she might have a problem.

The caveat here, and it's a major one, is that it's tough to fault either the cast or their performances.  Jessica Chastain is one of the most magnetic, charismatic actresses working today and, by happy accident, also one of the most talented.  She's excellent as Eleanor, finding little moments of nuance in the physicality of every scene.  For instance, the scene in which Eleanor goes out clubbing with her sister and almost has a one night stand is hopelessly rote, but as she pulls away from the stranger she's about to sleep with her change of heart is writ larger in her face and her movement than in the dialogue.  It's a rare ability, being able to let us read a character's thought process without seeming to overact, but Chastain is brilliant at it.

James McAvoy is also good, though his character is somewhat more muted than Chastain's and so makes less impact, especially in the early part of the film.  What he puts across extremely well is the sense of Connor dragging himself through the days.  You don't know, early on, what the event is that lies behind this, but when you do the whole performance begins to come into focus.  McAvoy and Chastain also play well off each other, you can believe that there was once a passionate relationship and that the embers might still just about be alight and that helps keep the film somewhat engaging even when the script is at its weakest.  It's also why I would prefer to have seen Him and Her, because it would be interesting to truly see both sides of this relationship.

The rest of the cast are solid too.  Isabelle Huppert is well cast as Chastain's mother, but she's underused, as is Ciaran Hinds as McAvoy's father, but William Hurt, Bill Hader and especially Viola Davis, injecting life into the film in some sparky scenes opposite Chastain as her identity theory teacher, all do strong work.  The problem is that, as much of an effort as the cast puts in and as much as they often achieve, it's in service of a script that seldom comes together in the way you'd like.

This is why, though I will see them given the chance, I have my doubts as to whether Him and Her can fully paper over the cracks that are so apparent in Them.  A novel approach to presentation is all well and good, but, like fine performances it can only go so far in saving material that isn't working.  In this cut The Disappearance Of Eleanor Rigby is, at best, the sight of a studio deliberately sanding the edges off something to make it less interesting and that makes it tough to recommend, good as Chastain and McAvoy are.
★★
Posted by Sam Inglis at 19:51