The Face Of An Angel
Dir: Michael Winterbottom 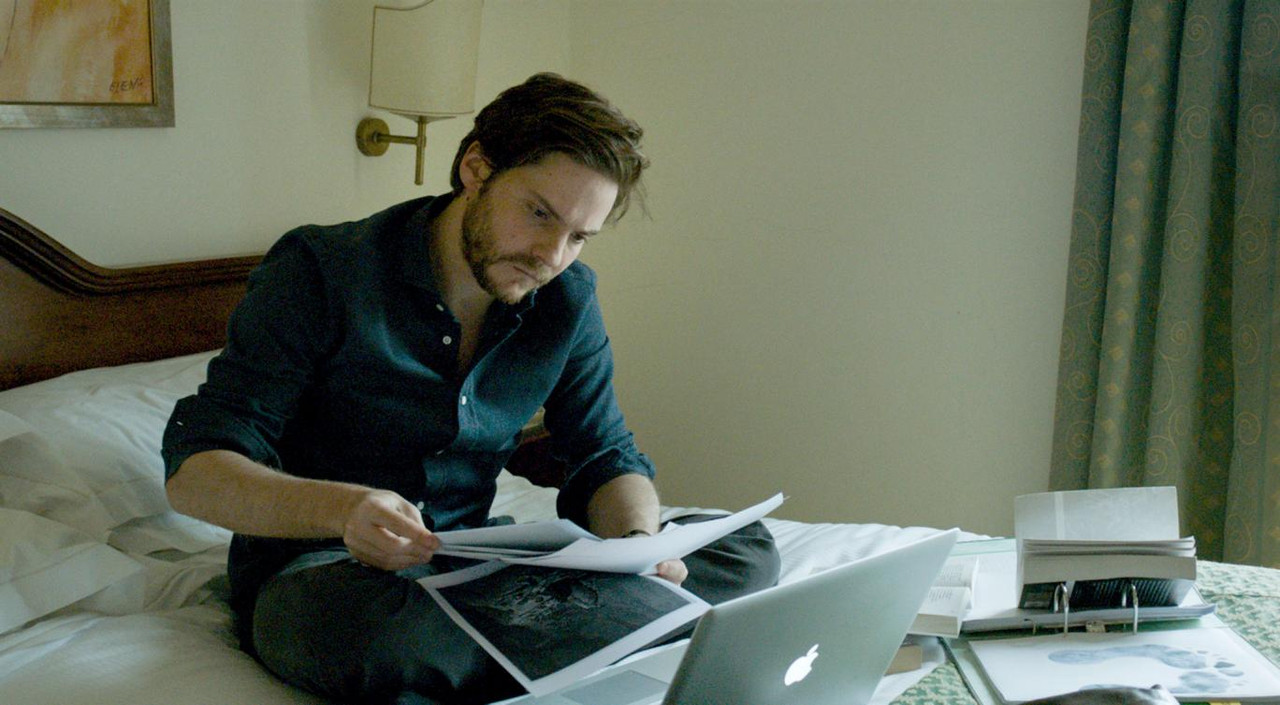 Michael Winterbottom is probably Britain's most prolific director, generally turning out at least one full length project every year (his last feature, Everyday, played LFF in 2012), unfortunately his recent career has reflected the ups and downs that almost inevitably come with that sort of productivity.  The Face Of An Angel is not just a downward turn in form but one of his very worst films.

Winterbottom's point of departure is the Meredith Kercher case.  Here Kercher is renamed Elizabeth Pryce (Sai Bennett) and Amanda Knox, the roommate first convicted, then acquitted and now, in her absence, re-convicted of her murder is called Jessica Fuller (Genevieve Gaunt), but they hardly matter. The film isn't the story of Meredith Kercher, or of Amanda Knox or their analogues. Indeed, Winterbottom shows almost no interest in the case itself, instead spinning the story of filmmaker Thomas (Daniel Bruhl) who is struggling to write his own film about the case, largely because he too wants to use it as a mere jumping off point to make a film based on Dante's Divine Comedy.

Winterbottom has previously explored the difficulty of creation with great success.  A Cock and Bull Story hilariously took apart the process of trying to adapt Tristram Shandy, but here Winterbottom comes unstuck while trying to make the same point with drama.  The film's thesis is laid out early in clangingly earnest fashion, when Thomas is told that his film should be fictional because “you can only tell the truth by making it fictional”.  He tries to further explore this angle in scenes with Beckinsale and her friends and rivals in the press pack covering the appeal in the not Amanda Knox, just exactly like Amanda Knox in every detail, case.  Sadly all these scenes end up doing is regurgitating old points about how sleazy the UK press is and how everything in your newspaper has an angle, and is played for drama first, fact second.  These are surface jabs; things people already know if they have followed things like the hacking scandal and Winterbottom never gets deeply enough into the journalist characters to say anything less prosaic.

At times it's almost impressive how miscalculated The Face Of An Angel is.  Midway through the film Winterbottom seems to decide that it might be an interesting idea to riff on Zodiac, so he introduces a sinister blogger who serves as Thomas' landlord and who Thomas begins to suspect of being involved in the killing.  The attempts in this subplot to find a scene as creepy as Zodiac's basement meeting between Jake Gyllenhaal and Charles Fleischer are just risible.  The dialogue is never remotely convincing and the plot adds nothing to the story.  This is also true of the several utterly inexplicable dream sequences, one of which features a CGI monster.  No, I don't know why either.

It's tough to blame the actors for their performances because Paul Viragh's screenplay gives most of them so little to play, but the fact remains that Daniel Bruhl, who impressed in an English language role in Rush, seems lost here.  For all his screen time as Thomas we never get much of a handle on him.  In fact after a certain point it's hard to see him as 'Thomas', rather than as an analogue for Winterbottom himself.  Kate Beckinsale is similarly adrift, along largely to provide exposition and a couple of brief sexual interludes for Thomas.  Like Bruhl, she's not terrible, just wasted.  The surprise among the cast, indeed the only person to emerge from this farrago with much of their dignity intact, is Cara Delevigne.  As a barmaid who ends up as Thomas' guide in Siena she gives a sparky performance and shows that as well as her unusual beauty she has a natural screen presence.

On the one hand there is a certain level of fascination in what seems to be Michael Winterbottom's semi-autobiographical mid life crisis being played out on screen in surrogate form (legal note: I'm not suggesting the cocaine usage and Kate Beckinsale shagging are drawn from real life).  The problem is that Winterbottom hasn't committed to making that film.  By wedding it to something inspired by what could justifiably, thus far, be called the trial of the century he does no justice to either and, more problematically, the coverage of the Knox/Kercher case ends up so prosaic it's insulting.  This isn't helped, as Winterbottom clearly would like  it to be, by a closing dedication to Meredith Kercher, which, along with the mawkish final montage, comes across as more of a self-serving figleaf than anything sincerely meant.

The Face Of An Angel is something of a débâcle.  I might have been interested in either of the films it attempts to be, but jamming them together is one of the worst ideas of Michael Winterbottom's career.
★ 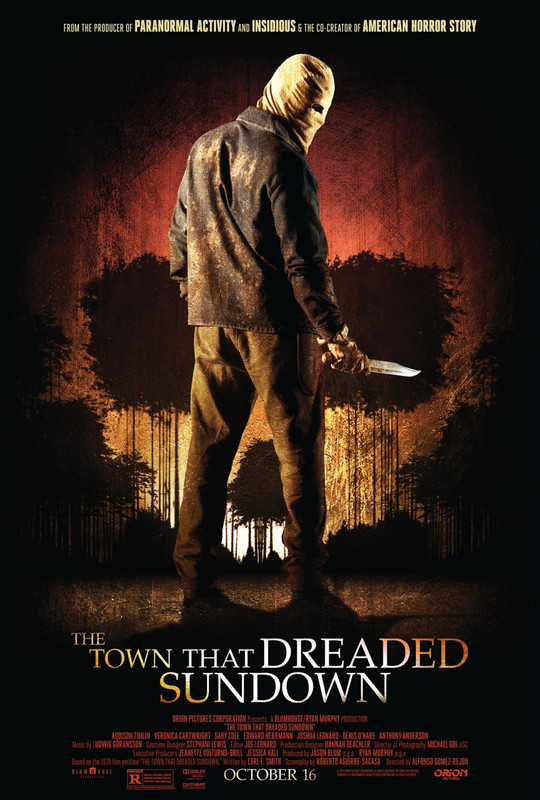 The remake has become a byword for the lack of invention and inspiration that seems to be running through the mainstream American film industry of late and for the last decade horror fans in particular have had cause to groan inwardly every time a new project with the same title as a cult classic has been announced.  There are, however, a handful of projects that buck the prevailing trend for empty retreads and over-explained reboots of previously mysterious monsters.  The Town That Dreaded Sundown is one of them.

Rather than simply remake the original film, this one folds it into its story, setting it up as part of the mythology surrounding a real killer, known as the Phantom, who stalked the town of Texarkana on 1946 and was never caught.  Late in 2013, the Phantom appears to have returned and to have set high schooler Jami (Addison Timlin), the girlfriend of his first victim, the task of discovering and informing the town of why he is back.

It's refreshing to see a clever conceit at the heart of what seems, at first glance, to be another simple cash in, but it's also good that the film wears its post modern twist reasonably lightly, delivering the slashery goods in a form that horror fans will enjoy as it plays up to and relishes the tropes of the genre.  Alfonso Gomez-Rejon directs somewhat playfully, referencing the masters (Carpenter, Fulci, even Fincher, with an early murder scene that has a few shots straight out of Zodiac), but he also finds his own style and recurring themes.  The use of neon lighting, especially in the motel murder, gives the film an 80's throwback feel (also reflected in the opening Orion Pictures logo) and there is some very striking imagery of eyes, especially of the Phantom reflected in extreme close ups of Addison Timlin's eyes.  The directorial and editorial timing is also bang on, with jump scares working even when you know, as a horror fan, that they're surely coming.

The performances are solid all round, with a nicely cast group of character actors playing the town's older residents, Gary Cole and Anthony Anderson are especially notable as a sheriff and a Texas Ranger respectively.  Addison Timlin is a capable actress and makes for an appealing final girl, though her assertion early in the film that “I don't get asked out much” rings incredibly false.  The film cleverly combines its invented legend, the original film and its own innovations for about 65 minutes, but sadly can't quite hold it together for the ending.  By this time the red herrings have been thoroughly (though amusingly) worked through , so the culprit is pretty obvious.  When the film tries to spring a surprise it's so left field that for a moment you could feel the audience give a collective 'WHO?!'

It's a shame that The Town That Dreaded Sundown can't quite wrap things up satisfyingly, but the film is strong enough and unusual enough that it doesn't lose many points for that.  It marks out Gomez-Rejon as an inventive talent to watch and, in cannibalising its source, stands on its own merits as a horror film, while also making me want to go back and see the original, on the promise that it won't simply be this film with more lo-fi visuals.  I'd happily see more remakes if they were all like this.
★★★½
Posted by Sam Inglis at 19:19