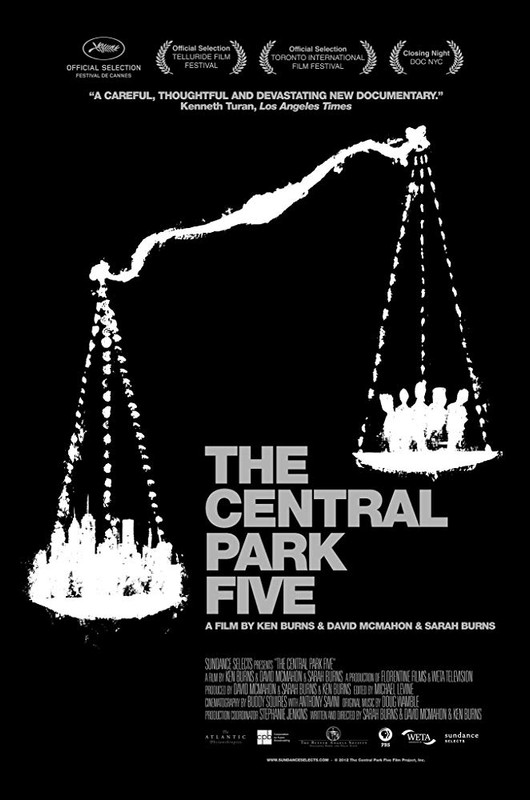 It's been a year of crime and justice in the LFF documentary programme, and while The Central Park Five has garnered less attention than West of Memphis – just as it seems their case garnered little attention as the problems with it became clear it is, for me, a rather better film.

The case of the five men we we see and hear in the film (one, Antron McRay, didn't want to be on camera, so contributes only audio interviews) began in 1989, when they were just teenagers. A jogger was raped and beaten in the park and, in a familiar story, the five boys were picked up in an investigation that was rushed because of the urgency for the community to see justice being done.  In two separate trials the boys were sentenced to between seven and fifteen years, all but one would have served their entire original sentence (Raymond Sanchez went back to prison after turning to selling drugs having been unable to find work after leaving prison) by the time that the problems in their case came to public attention.

Ken and Sarah Burns and David MacMahon examine the case in detail, looking both at the crime itself and the way it fit into the larger social picture of New York in 1989; especially in terms of the way race and class played a part in the arrest and conviction of the five boys.  False confessions, as they often do, played a part in this miscarriage of justice, and the footage of the boys 'confessing' their 'crimes', thinking that this was what they needed to do: give the Police what they wanted so they could go home, is truly shocking.

The use of archive footage, both police footage and news coverage of the time (which, tellingly, seems to have no use for the presumption of innocence) is well used, and the new interviews with the boys - now all in their mid to late thirties - are equally good.  The five are all very different, the most memorable interviews are with Korey Rice, who seems a touch slow and is the one you can imagine capitulating under interview and giving a false confession and with Raymond Sanchez, who clearly has a lot of anger still, which comes through with particular force when he talks about losing his faith around the time of the trial.  The most incredible interview is one of the jurors in one of the original trials, where deliberations stretched on for ten days.  Juror number five says that he was the only holdout who wanted to discuss the validity and believability of the confessions, but that after so long he simply wanted to go home, and changed his vote to run with the majority.  It's an astonishing admission, and one that implies incredibly troubling things about any jury trial.

The Central Park Five brings an underexposed case into sharp focus, and asks pertinent and sometimes disturbing about the way justice - particularly American justice - is administered.  It's an excellent film, and I'd expect to see it cropping up (retitled, naturally) on the BBC's Storyville some time soon.
★★★★☆ 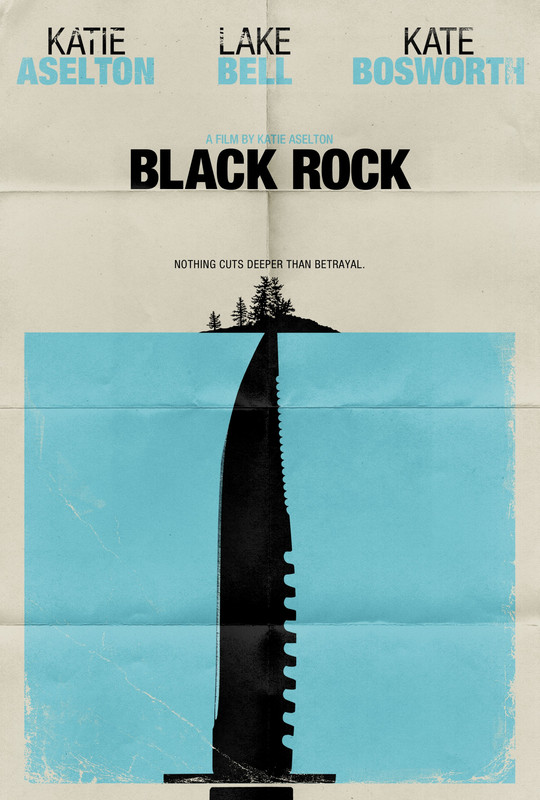 One of the best things about the shake up in festival programming this year has been the Cult strand, which has, for the first time since I've been attending, brought more genre inflected cinema to the festival. Black Rock takes the survival horror genre, and, with the help of screenwriter Mark Duplass, filters it through the mumblecore style which has been an increasing presence in US independent cinema over the past six or seven years.

Sarah (Kate Bosworth), Lou (Lake Bell) and Abby (director and story writer Katie Aselton) were childhood friends, but Lou and Abby have grown apart since an incident six years before. Sarah wants the gang back together, and so invites each of them, without the other's knowledge, for a weekend on the island where they spent childhood summers, aiming to dig up the time capsule they buried 20 years ago. When they arrive they think they are the only people on Black Rock, but they run into three men recently returned from Afghanistan. When Abby begins flirting with Henry (Will Bouvier) things soon turn dangerous.

The thing I often find myself complaining about with horror cinema is the fact that characterisation is often very thin - too often thin to the point of total non-existence - or that if someone has bothered to flesh out the characters the result is that we immediately want them to die, slow and violently. That's not the case here. The film spends a measured first half hour establishing the three girls and their relationships. We get a sense of Abby as being very fragile, Lou the one who is up for confrontation, and more impetuous, and Sarah as the peacemaker. The dynamic between them is well drawn, and all three are sympathetic in their own ways. Abby, in particular, could easily have been grating, as a character who has held a grudge for six years, and who does complain rather a lot, but Aselton's performance is good, and makes her easy to empathise with. As you'd expect, given that this is a horror movie, dynamics shift, and all three leads cope well with this, particularly Aselton and Bell, who have the furthest distance to travel in the ways their characters change. Unfortunately not all of the performances are as good, nor all of the characterisations as successful. The antagonists being dishonourably discharged marines does smack of political point scoring, and it doesn't help that Jay Paulson, as Derek, turns in work that is alternately wooden and overegged.

The horror element of the film is well marshaled by Aselton (who scores one big jump scare with a moment that turns out to be ridiculously mundane), and she and Duplass serve up a few twists on horror convention that work quite nicely, such as finding a practical reason for Aselton and Bell to serve up what would otherwise be a gratuitous nude scene and not bowing to the tradition of the 'final girl'. The violence is relatively infrequent, and the film doesn't dwell in it - sorry gorehounds - but there are moments that feel really painful, and a couple of well realised practical gore effects (broken bones poking through skin always get to me). The main reason it works though, in spite of the slight weakness of the antagonists, is that you're invested in the three girls. I've said it so frequently, but a horror movie lives or dies on whether you care if the characters it puts in danger live or die. In this case I did.

Black Rock is not spectacularly original, nor is it a new horror classic, but it combines its initially disparate seeming genres effectively, is generally well acted, and is never less than engaging, certainly among the recent US horror crop, it stands out.
★★★☆☆ 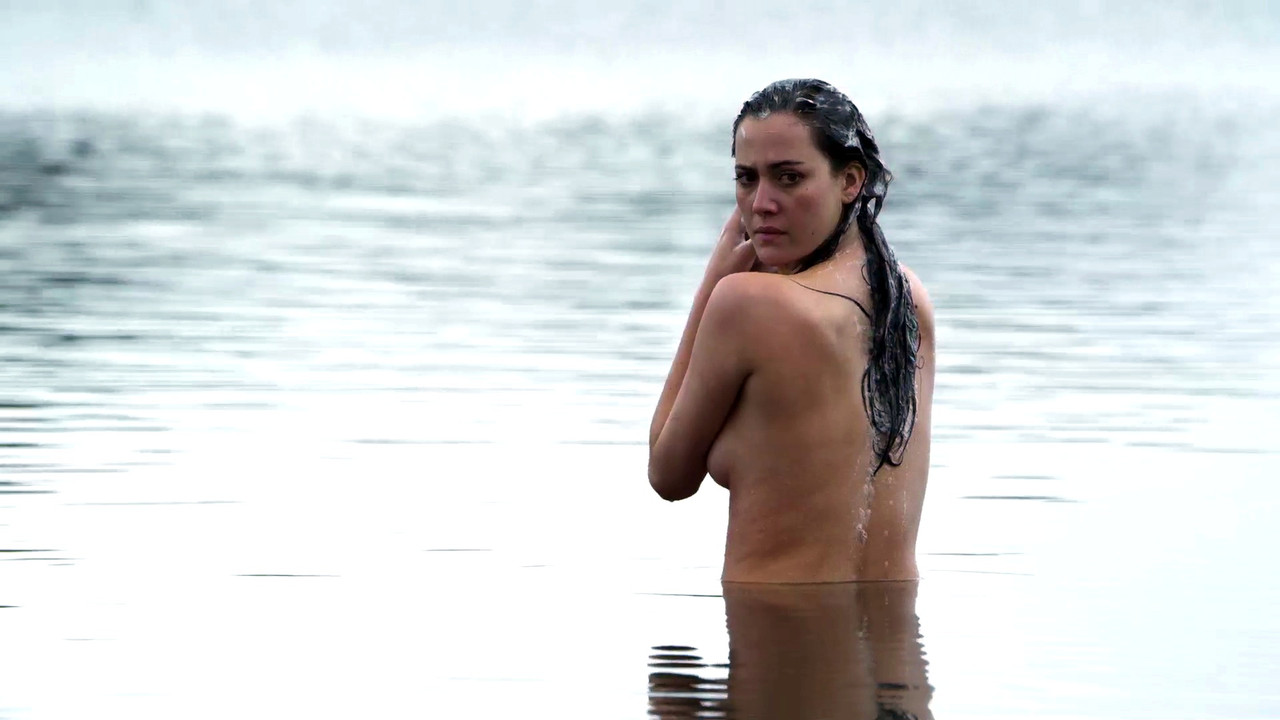 We tend to see African films about the social and political situations either of the past or of the present, so I suppose that it's refreshing that Barry Berk's debut couldn't be further from that, instead taking a leap into genre territory; specifically a noirish thriller, albeit one that begins on a rather different footing, as a film about the grief of John (Lionel Newton) who wakes from a coma as the film opens, only to find that his wife and daughter have been killed in a car accident caused when he fell asleep at the wheel. To recover, John goes to a remote house in a coastal village, where he meets Roelf (Deon Lotz), who has also recently lost his wife. John gets close to Roelf's daughter Jackie (Jay Antsey), who seduces him; a dangerous secret to keep from the controlling Roelf.

I was rather enjoying Sleeper's Wake for about 80 of its 94 minutes, and then the ending happened. Before we get there though this is, on the face of it, an entertaining if somewhat trashy little noir, with shades of erotic thriller thrown in. It surprises you with what it is, because the first fifteen minutes play as a realistic drama about John trying to deal, with the help of his sister, with the grief and guilt of what happened to his wife and daughter. Lionel Newton's dazed performance proves adept at putting this across, and we expect this to be what the film is. The gear shift initially works well, with the unnamed coastal town John stays in exuding weirdness at every turn, so much so that I initially suspected that the local cop and even Jackie might simply be John's hallucinations, so strange is their behaviour. This feeling is also backed up by that same detachment in Newton's performance. The film keeps this feeling up well for a time, but as it becomes clear that this is not in fact the case, and that it is simply working through some standard thriller tropes, it becomes somewhat less interesting (though still a proficient and fun genre piece).

Jay Antsey is a fine femme fatale - you can see exactly why, despite her wildly changeable demeanour and her clearly mercenary aims, John is sucked in by her, and while he sometimes pushes the boat out into camp (even before the film goes off the deep end) Deon Lotz is an imposing and creepy presence as Roelf, his motives never quite clear.

However, with about fifteen minutes to go, Sleeper's Wake goes mental in a way so profoundly awful - let's just say, for those who have seen it, baboon - that not only was I trying to hold in derisive laughter, not only can the film not recover, but it undoes everything that went before, making it much less fun, much less intriguing because this stinkbomb of an ending was what it was leading up to. This is what Lionel Newton simply can't pull off; I buy him as shifty or conniving, as someone capable of calculated violence, but what we see here? Laughable. I wish I could actually discuss it in detail, go in to everything that is wrongheaded about the ending, tear strips off it without spoiling it totally, but I can't. All I can really say is that I can't remember the last time a film that, even if I didn't think it was any kind of classic, I had been enjoying unravelled so fast, so totally and so needlessly. It begins as a moderate success, but ends up a spectacular failure entirely of writer/director Barry Berk's making.
★★☆☆☆
Posted by Sam Inglis at 14:39