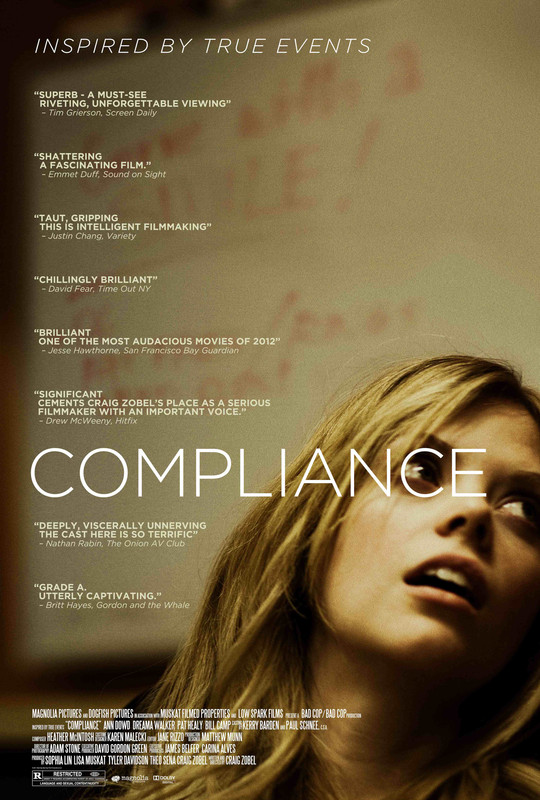 Compliance is one of those films you might not believe were it not based on a true story, and even then, I'm not sure I believe it entirely (we'll get to that). Taking place over a single afternoon, the film is about one in a series of cases in the US in which a caller pretending to be a Police Officer convinced a manager (in this case the manager of a fast food chicken outlet) to detain and strip search a female member of staff or customer on the pretence that she was suspected of a crime, and that this would be quicker and less painful than following official channels.

In this case Becky (Dreama Walker) is the mark. The caller says she's accused of stealing money from a customer, convinces her manager to do the strip search, and things escalate from there as the caller exerts control over more and more people at Chickwich.

Compliance is a 90 minute exercise in tension, set almost entirely in the back room of this fast food restaurant, and on these terms it works brilliantly. There is an increasing sense of claustrophobia and menace in every scene, as the caller's demands become more extreme, as more people are drawn in and as we see the extreme contrast in the way Becky is feeling and the totally relaxed front the caller is putting up as he victimises her, and most of the people around her. The film I found Compliance most redolent of was Das Experiment, it has a similar sense of the setting pressing in on the characters, a similar sense of a collective delusion and asks similar questions about the darker side of human nature (how far would you go in this situation?)

In order to work, the film has to feel real – horribly real – and for the most part it does. Dreama Walker gives a gutsy performance as Becky. The nudity will be much remarked upon, but it never feels exploitative, it's treated as horror, not as titillation – other than for the caller. Walker has a tricky job, convincing as someone who knows she's done nothing, knows at some level that something very wrong is happening, and yet still goes along. For the most part she acquits herself well, and when she falters it's really more the fault of the screenplay.

There's an equal sense of down to earth reality in both the looks and the performances of the supporting cast, with Ann Dowd as Becky's manager Sandra and Pat Healy, giving a performance that is horribly slimy, and yet convinces you of his ability to control people as the caller, the real standouts.

Craig Zobel does great job in the first 60 minutes or so of the film of convincing you of this nightmarish situation, but at a certain point he just lost me. There is a moment, which I won't reveal both because it's a spoiler and because you'll know it when you see it, in which I simply stopped believing that Becky, even as beaten down as she is at this point in the film, would simply go along. I bought it from the other character in the scene, but at that point Becky's failure to say 'Fuck you' to the caller feels like a writing, rather than a character, choice.

Aside from that moment though, Compliance is a riveting, if difficult, watch. Walker serves notice that she's more than a pretty girl on a sitcom, and Zobel's confident debut promises even better things for the future.
★★★★☆ 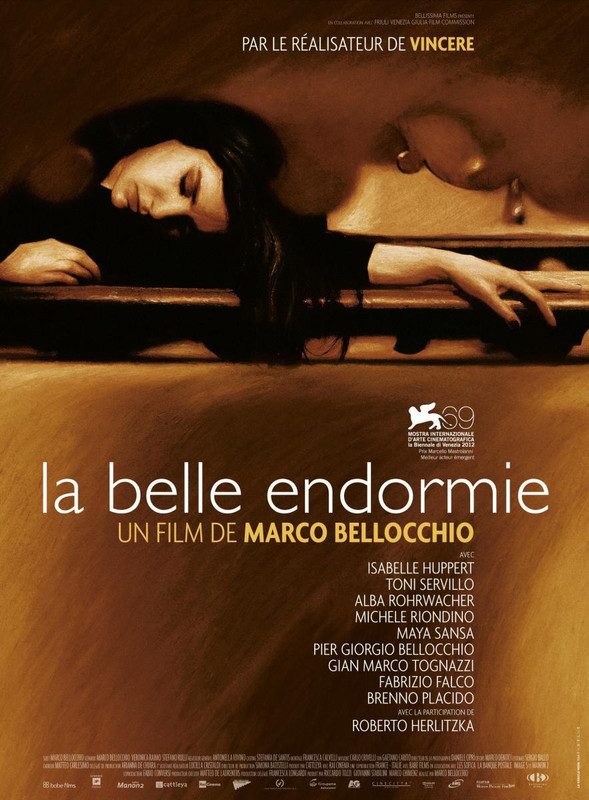 It's apt that the four stories in Dormant Beauty all revolve around people in some way related to coma victims, because the film nearly left me in that state.

A politician (Toni Servillo) is advised to vote against his conscience on a bill regarding extending a patient's life against their will. His daughter (Alba Rohrwacher) in favour of the bill, falls for a protester (Michele Riondino) on the other side. Away from the politics a Mother (Isabelle Huppert) and her family get together for the coma stricken daughter's birthday and a doctor (Pier Giorgio Bellochio) treats a drug addict (Maya Sansa) whose suicide attempt leaves her in a coma.

This is a lot to cover in 110 minutes, and that's the problem. At first Bellochio concentrates on one story at a time for long periods of time (Huppert, second billed, appears in one barely contextualised shot in the first 45 minutes), before trying to draw the strands together in the last 25 minutes or so. Neither approach works. The first simply means that we forget about several of the stories for long periods, while the latter serves as a reminder that only two of the stories have any function in relation to each other. The structure also means that the multiplicity of characters are fatally underdeveloped.  I never felt like I got to know these people, and that, despite some good performances, especially from Servillo and Rohrwacher, meant I just didn't care what happened in any of the stories.

It's all but impossible to get past that, though there are other issues, especially the first performance I've seen from Isabelle Huppert in which she seems simply to be on auto-pilot.  Huppert is one of my favourite actresses working, perhaps ever, and so to single her out here as disappointing is a bitter pill to swallow, however, she doesn't give the worst performance, of the many melodramatic turns the worst comes from Brenno Placido as Huppert's son.

Ultimately though, there's only one thing that really matters when it comes to Dormant Beauty.  I simply didn't care.  I doubt you will either.
★★☆☆☆ 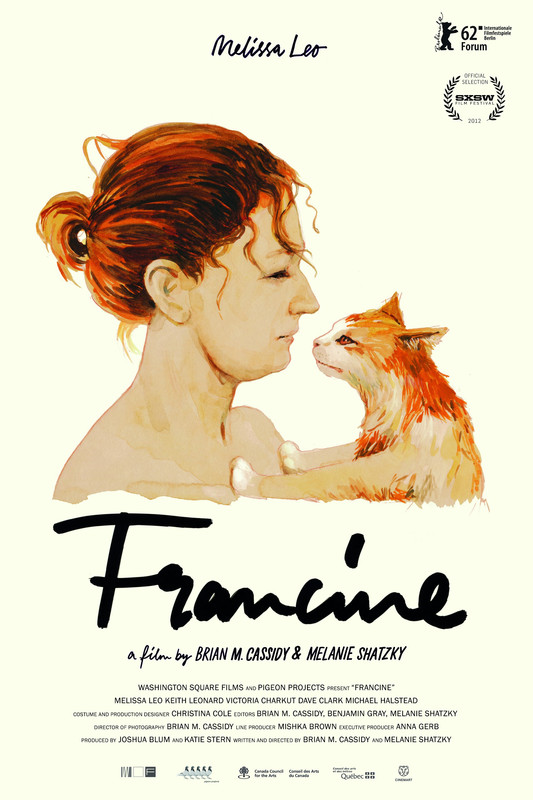 It's not my most popular opinion, but I really, really didn't like Melissa Leo's Oscar winning performance in The Fighter, the fine, subtle, actress I'd seen in Frozen River, The Three Burials of Melqiades Estrada and more seemed to vanish, and was replaced with somebody who couldn't have seemed more like she was acting. I'm not sure what I hated more; the fact it was the worst kind of give me an Oscar grandstanding, or the fact it worked. I was relieved, then, to see that Leo's next major part was a return to both independent cinema and a much more dialed down style of acting. Unfortunately she can't really rescue Francine from itself.

The story, such as it is, concerns a woman played by Leo (we must assume her name is Francine, she never speaks it and nobody ever asks it that we hear) who is released from prison after what seems to have been a reasonably substantial stretch (How long? For what? How dare you ask this movie such unimportant questions). She moves to a small, scattered town nearby, for a while she works for a local man, tending to horses, but mostly she takes in stray animals, turning her home over to them.

I'm all for character studies, I'm all for low key movies, but there has to be some sort of insight; a feeling that you're getting a real picture of this person's life. There are so many important things left unexplored here. How does Francine immediately walk in to an empty (and reasonably nice, for where it is) house on leaving prison? What about a hostel? Where is her parole officer? (the existence of which is never so much as hinted at). Why isn't she reported when she steals a dog from the pet store she works at when first released from prison? Similarly, quiet films aren't a problem, but Francine – both film and character – is so quiet that it gets in the way of you having much connection to her.

That's probably why I'm thinking about the questions I posed above, which really shouldn't be an issue. We get the idea that she has trouble relating to people, but there's no indication of why, and in leaving things like this out it feels as though writer/directors Cassidy and Shatzky are asking you to do half of their work for them. Perhaps this would be less of an issue if the film weren't so painfully mundane, and didn't feel, even at 79 minutes, so padded. Minutes on end are devoted to points the film could have made in far less time. For instance, there are four minutes of Francine rocking out to an impromptu heavy metal band, I get that she's revelling in her new freedom, but honestly, if you can't make that point in two minutes you just aren't trying.

The elements are there in Francine that you can see how it might have been a very good film, but ultimately it's so skeletal, so minimalist, that it simply becomes stunningly uninteresting.
★★☆☆☆ 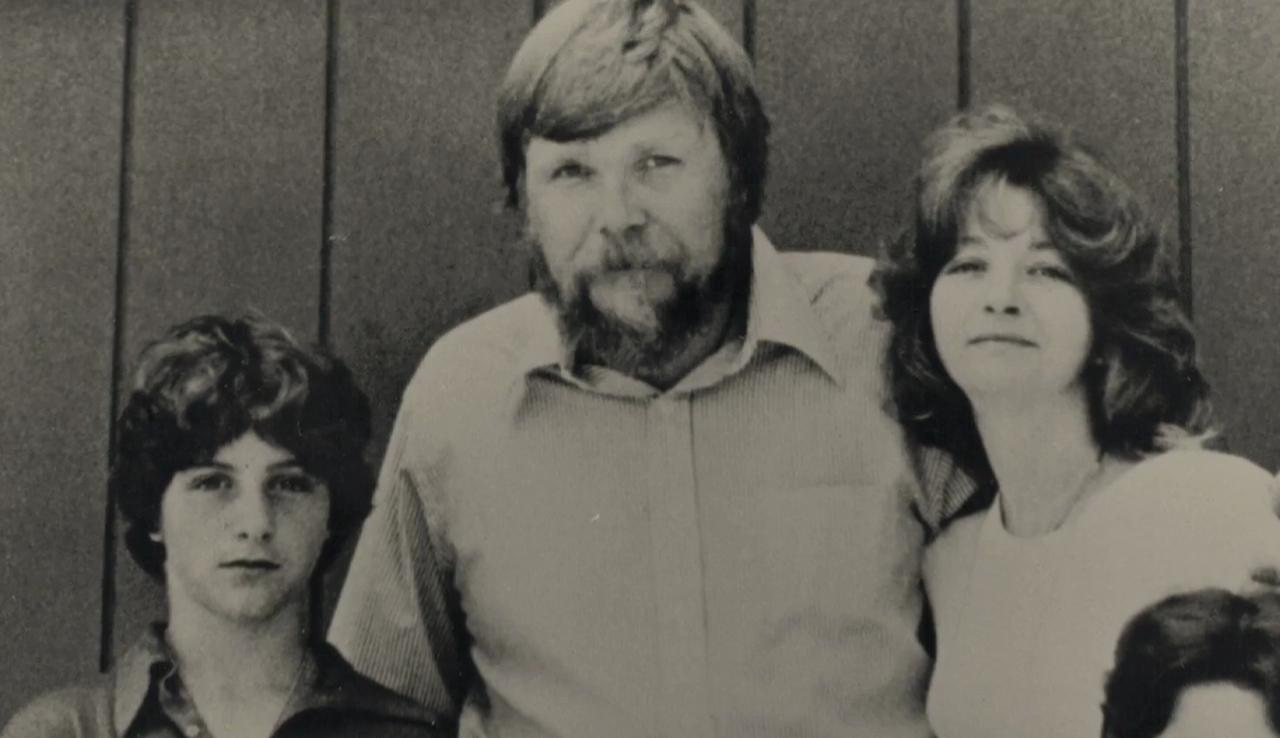 Most of us, even if we've not seen all of the films, will have some idea of the story of the Amityville hauntings, in which George and Kathy Lutz claimed that extreme paranormal activity drove them and their three children out of their home just 28 days after moving in in 1976. The debate around whether their story was true or a hoax has persisted for almost forty years.

This documentary is largely a first person view, from Kathy's eldest son (the children were all adopted by George Lutz and made to change their surname) Daniel of what he thinks happened and of the effect the hauntings and their notoriety have had in his life. Director Eric Walter stays wisely non-committal on whether the hauntings happened, largely opting to let Danny tell his story and presenting it for us to make our own determinations.

The picture that emerged for me (for the record, a total sceptic on the issue of ghosts and other paranormal phenomena) was one not of a haunted house, but of a haunted man, dogged by abuse, possibly by the odd beliefs of his Mother and Stepfather and by a story. I believe that when Daniel Lutz tells us about the paranormal experiences that happened to him as a child he believes every single word of what he is saying, and it's plain to see the effect it has had on him, but that's as far as my belief stretches.

Eric Walter largely stays back as director and lets Daniel tell the story, but he asks some well placed and pertinent questions of his subject, and offers some alternative viewpoints, especially on George Lutz, who Daniel seems to see almost as a demon, to contextualise the story. My Amityville Horror offers an interesting and different angle on a story that has been told and retold. The picture is still incomplete – neither of Daniel's siblings would participate, and George Lutz is dead, unable to answer what is asked about him here, but it's compelling, essential for Amityville nerds and a surprisingly sad look at a man who, natural or supernatural, has clearly been through a great deal.
★★★☆☆
Posted by Sam Inglis at 22:44