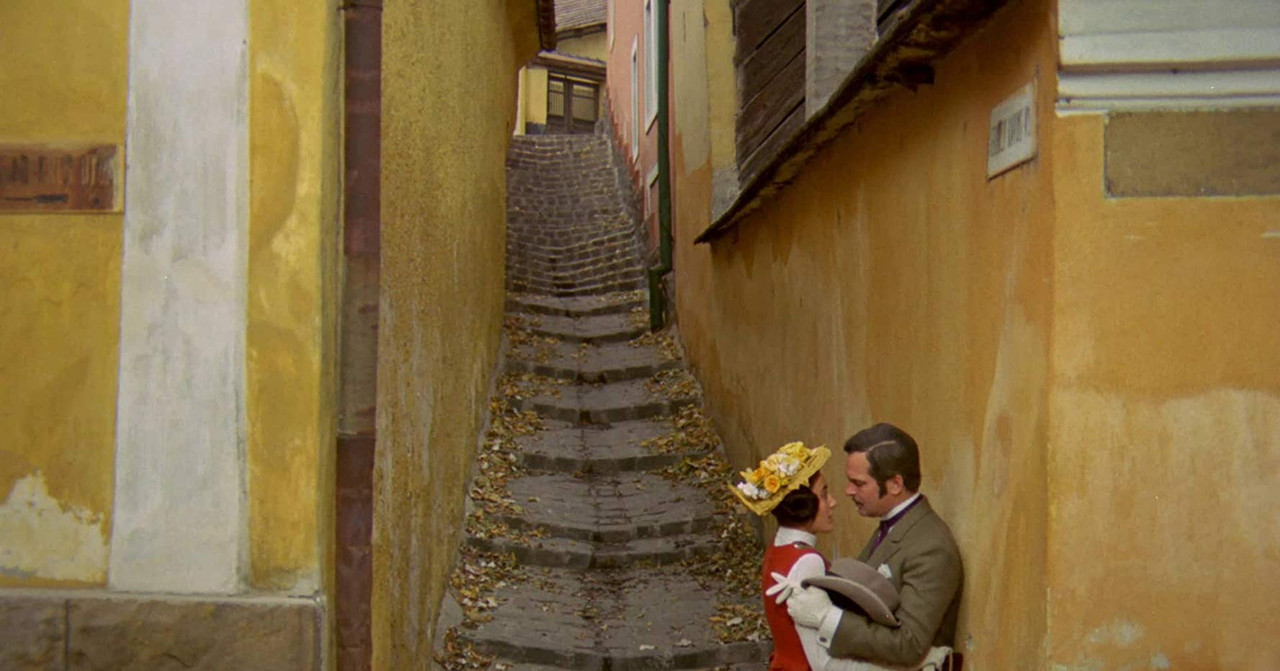 Made in Hungary in 1971, Szindbád is quite a late contribution to Eastern Europe's surrealist movement, which was peopled largely by artist rebelling against conformist communist societies. I wonder if, if I knew more about Hungarian politics, the context of this film, and exactly what Zoltán Huszárik felt in relation to it, I would have liked Szindbád more, but while I'm sure there are layers here that I am not getting, and I'm equally sure that that undermines my enjoyment of the film, that's not to say that there aren't things to recommend here.

Szindbád is a visual marvel. It's essential that the film be beautiful, because its eponymous central character - who seems to be an aristocrat of some sort, but not to have any settled job or residence - is clearly captivated by beauty, and particularly by the beauty of nature. This natural beauty is the film's focus, it is a sensual film, it delights in nature (the near microscopically close up shots of flora and fauna put me in mind of certain sequences in I Am Love), in food and perhaps most notably in women. As far as it has any structure, the film is a dossier of memories of the various beautiful women who have drifted through Szindbád's life. Huszárik, and by extension Szindbád, see beauty in women old an young, from every class and of diverse appearence. There is relatively little nudity, and no sex to speak of, but the film is in thrall to the beauty of women, and Huszárik's soft lighting and his focus on detail in all things (be it a flowers petal, chilli seeds in soup or a woman's breast) draws us into a sensual experience.

For me, Szindbád felt like a series of beautiful digressions, but the frustration of it is that I'm not sure that it is anything more than that. This is a surrealist work, so going in expecting a traditional narrative would be foolish, but the film gives us very little to hang on to. Szindbád himself (Zoltán Latinovits) is so studiedly unemotional - he tells us that the secret of his success with women is not telling them that he loves them - that he always remains distant, and he's so prone to spouting pretentious (and largely irrelevant) philosophies that he's often a chore to follow. None of the women are really around long enough to develop any character, and there is no sense of even the most subtle narrative through line (even films like Valerie and Her Week of Wonders have a central thread, which is then disrupted by the surrealist telling). Engagement is further complicated by a timeline which seems to skip back and forward through time, without giving us any clue to - or real reason to care about - chronology. What I was left with was a film I admire a great deal for its visual splendour, but the frustrating feeling that I'm going to need to do some serious reading to understand it enough to truly appreciate it.

Szindbád is hard work, but right from the start it is rewarding, because it is so beautifully shot and edited (the combination of very fast cutting with other scenes that unfold in long held shots is striking and means that the film always remains visually unpredictable). I'd like to be able to recommend it in more glowing terms. This one is probably for long standing fans and students of surrealist cinema, as a starting point I'd suggest Valerie, or some Bunuel, but if you are already interested in the movement then I suspect that Szindbád will delight and fascinate you.
★★★☆☆
Posted by Sam Inglis at 12:19