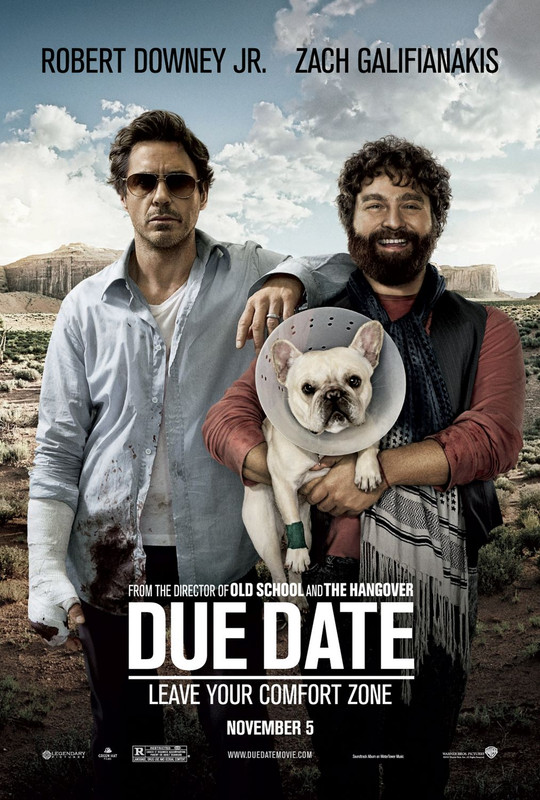 A series of open letters on the subject of Due Date.

Dear Alan R. Cohen, Alan Freedland, Adam Sztykiel and Todd Phillips,
I should probably address you as you’re credited for your screenplay. So, let’s start with Alan and Alan. You guys are credited with Due Date’s story. This makes me laugh quite a lot (more, certainly, than the movie, but believe me, we’ll get to that) anyway, what you are very optimistically credited with as your own invention isn’t, it’s Planes, Trains and Automobiles. Oh you’ve dressed it up with some swearing, some wanking and some child abuse, sure, but it’s still Planes, Trains and Automobiles so lets be absolutely clear about this; if Due Date is to have a story credit, it belongs to John Hughes. Not that he’d want it; in fact I believe he’s the source of the faint spinning sound I heard throughout my screening.

Since I’m assuming (perhaps charitably, knowing Hollywood’s track record) that you guys didn’t get paid for simply saying: “Let’s remake Planes, Trains and Automobiles… but with two characters with severe personality disorders.” I have to assume that at least some of the ‘comic’ scenarios are yours. How about the sheer breathless hilarity of Robert Downey, Jr spitting on a dog (an apt metaphor, actually, for what he should have done with this script)? Or the gut busting scene where Zach Galifianakis has a wank (there’s a metaphor about the script in that too, can you spot it?) Oh, what about the brilliantly funny moment in which, completely inexplicably, Downey and Galifianakis get thrown off a plane, was that yours too? Or were you just responsible for the slavish copying of a John Hughes movie. You know, the bit where Zach Galifiankis (playing John Candy) falls asleep while driving, or Galifiankis’ habit of asking endless inane questions of Downey (as Steve Martin), or the bit where Downey attempts to pick up money wired to him by his wife, which is very reminiscent of Martin trying to rent a car in Planes, Trains… only not funny and with some gratuitous violence tacked on… because it’s ‘edgy’? Jesus Christ guys, get your own unfunny ideas.

By the way, Adam and Todd, don’t go thinking I’m letting you guys off. You rewrote this. That means that you took this dog shit covered ball and ran with it, dropping it in a few freshly laid turds along the way. I don’t know what’s yours, but the whole Mexican border sequence is so laughably tacked on that it pretty much has REWRITE stamped on every frame, and the hamfisted, implausible, unmotivated hugging and learning scenes are something of a trademark, aren’t they Todd? Anyway, Todd, I’ll write back because I’ve got plenty more to say to you.

Dear Todd Phillips,
Where to begin? Oh, right, what the fuck were you thinking? Here’s a script that, at its heart, is about a man (Robert Downey Jr) trying to get home for the birth of his first child. There really are few things easier to identify with, everyone wants to be there when his kids come into the world and it should also be easy to root for a guy with that objective, but you just keep undermining that identification. Not only is Peter Highman an utter raging asshole to pretty much everyone he encounters (including his wife, played by Michelle Monaghan, and by the way, when you hire an actress that good you might want to give her more to do than be a walking incubator) he’s also violent and abusive to adults, small animals and an eight year old child. I just want to take a moment, Todd, to have a look at the scene in which Peter is asked to watch a drug dealer’s (Juliette Lewis) kids while she sells Ethan (Zach Galifiankis) weed. They’re pretty typical kids; they mess around with Peter, pester him, pull his tie, so he PUNCHES ONE OF THEM IN THE STOMACH. And you expect me to want this guy to get back for the birth of his baby? Have you completely taken leave of your senses? I’m worrying about what he’s going to do when the kid cries, I don’t want this shitbag to meet his child, let alone see it born. It’s one thing to have a protagonist to start out unlikeable, but warm up credibly over the length of a journey (there was film you may have seen that did it quite well… Planes in the title I think), it’s entirely another to ask us to empathise with a violent misanthrope and want him to become a parent.

Beyond the troubling things you’re saying with this film, you’re saying them pretty poorly. It’s just a series of bits, the characters don’t have an arc. Ethan never changes one bit (like many of the ‘eccentric’ characters in recent cinema I worry that he’s an undiagnosed Aspergers case). By contrast, Peter seems to change scene by scene in the second half of the film; he hates Ethan / he’s Ethan’s best friend / he wants to kill Ethan / he loves Ethan. There’s almost no effort to explain these changes in Peter’s outlook. Is he schizophrenic? Films about mismatched buddies work because we see them change and adjust and warm up to each other. Neither of these people is appreciably different as the end credits roll, so what’s the story, where’s the investment?

In about five weeks you’re going to be 40. I wouldn’t believe it from this film, because you appear to have the sense of humour of a twelve year old. Violence, puking, animal genitals, masturbation, smoking weed, all these things are funny in and of themselves, who needs jokes? On a craft level too this film appears to be the work of a child. There’s barely an imaginative or interesting shot in the whole film (the only really striking visual in the film is provided free of charge by the grand canyon.) you may have styled this “A Todd Phillips Movie” but frankly it could be any rentahack’s movie. You seem to bring the same lack of engagement to the directing the performances as you do to the visuals and the general arc of the story, but you can find out a bit more about what I’ve got to say on that subject from reading the letters I’m sure Robert Downey Jr and Zach Galifianakis will want to share with you. 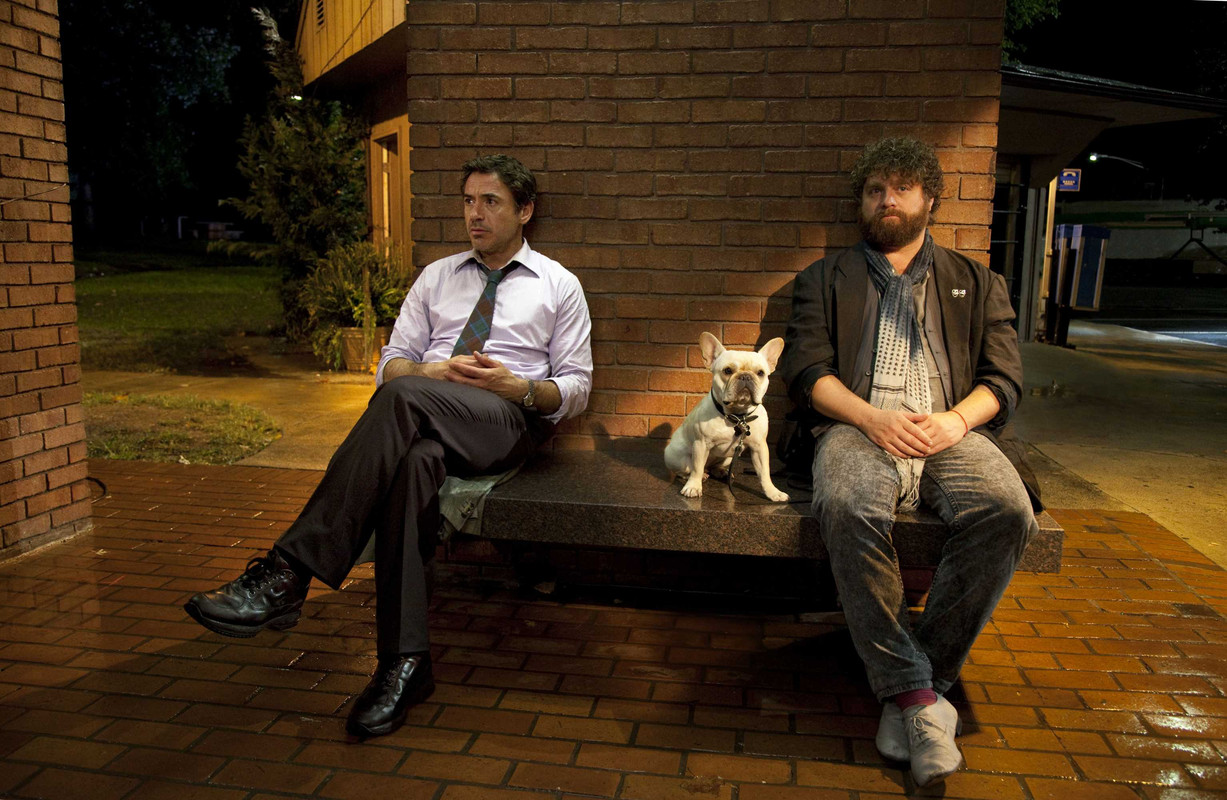 Dear Robert Downey Jr and Zach Galifiankis,
You are both clearly talented men, so exactly what are you doing in Due Date? Robert, you are still on the wagon, right? Zach, did the weed make this read funny?

Robert, you seem pissed off in this movie. I can’t blame you, but I’m not sure if it’s a character choice (if it was, a touch of advice… next time additional choices will result in a more rounded performance) or you just woke up every morning, read the pages you had to do, and then simply decided to treat them with the absolute contempt that they so richly deserve. Either way man, you’ve built up an enormous amount of good will over the past few years, and frankly you’re now in danger of pissing it all away with performances as phoned in as this one and your recent second take on Iron Man (actually in this one your character spends so much time on his Bluetooth headset I wonder whether it ever crossed your mind to deliver the performance that way. Also, much though I like you as an actor, I really don’t like you enough to root for a man who punches an 8 year old, let alone laugh when he does.

Zach, oh and it was all going so well. You were the funny bit of Todd’s last offense against comedy; The Hangover, you’ve just turned in a really fine dramatic performance in It's Kind of a Funny Story, and now this? Just how much do you owe Todd Phillips? Are there gambling debts involved, or was it just the weed? The thing about Alan (the same person by another name that you played in The Hangover) was that he wasn’t always there, he was the spice, a little comedy condiment sprinkled just liberally enough to make that film close to palatable. The problem with Ethan is that he’s never off screen and by God he wears thin quickly. As monumental a dick as Peter is it’s pretty hard to blame him when he first abandons Ethan (actually it’s less understandable when he goes back). Characters have to change, the journey in a road movie has to be more than physical, and from what you did here I’m not convinced that Ethan is a character at all, rather he’s an assortment of shtick; collected tics accumulated over a set of improv sessions. There’s nothing more behind it, and that’s why neither the comedy nor the story work.

I’m really disappointed in you guys, you’re reliably interesting and funny actors. I guess you just couldn’t overcome this screenplay and this director.

Dear Readers,
Don’t go and see Due Date, it’s shit. Even if it were better though, I’d still advise you to steer clear of it, because it already exists, has for 23 years, and if you want to see a comedy about two mismatched middle aged men traversing America in order to return home for a specific event, running into a series of comic mishaps, but becoming closer as time and travel go on, you should just see Planes, Trains and Automobiles again. It’s what Todd Phillips would do, and if you do maybe we can stop that spinning sound coming from John Hughes’ grave.
★☆☆☆☆