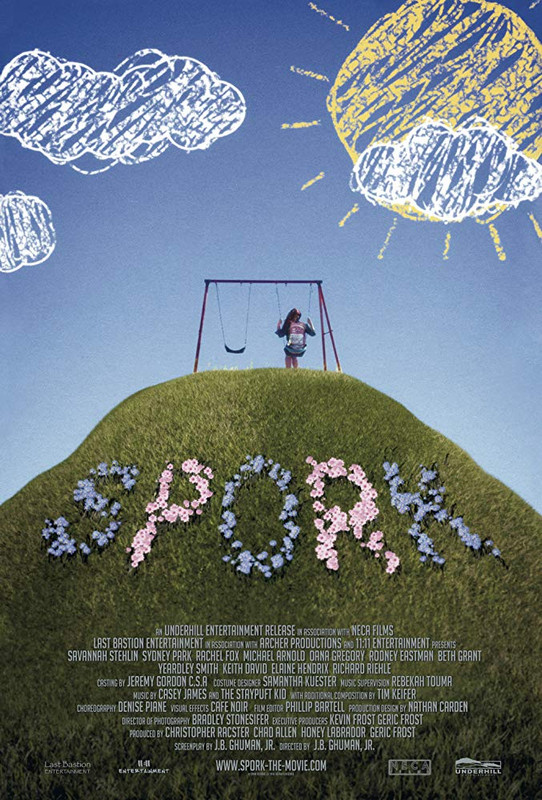 Last year, my LFF closed out with an offbeat American high school movie called Dear Lemon Lima, which, for some reason, no distributor has yet seen fit to give a UK release to. Hopefully Spork, which is to some degree this year’s equivalent in the LFF programme, will not suffer the same fate.

Spork is the name of the film’s main character (Savannah Stehlin); a female identifying intersex born 14 year old, who is an outsider at school. She’s bullied by a group of Britney Spears obsessed blondes who rule the school, led by the appropriately named Betsy Byotch (Rachel G. Fox), but when her friend Tootsie Roll is injured, Spork sees a way to get even with the people who have tormented her; win the school dance off.

This film rubbed a lot of the other critics I saw it with the wrong way, and I can understand why; the almost aggressive quirkiness of the film is definitely love it or hate it stuff, but I have to say, I found the whole thing inventive, irreverent, amusing and charming. There are a lot of influences, filmic and otherwise, at work in Spork. At times, it can feel a though director Ghuman is nodding to every kind of pop culture he can think of, but what this actually does is place the film very much in its own little world. It’s never quite clear when or where the film is set, because the references span several decades. On the one hand it’s post 1998, because of all the Britney Spears references, on the other people are still using tube TV, VCRs and there’s not a mobile phone to be seen. Blonde gang ‘The Bitches’ could easily have stepped out of Mean Girls circa 1988 and yet the music (Britney aside) feels very modern, as does the dance culture to which Tootsie Roll and her friends belong.

This very individual look and world means that you accept some of the film’s surreal touches, which otherwise you might struggle with. Many of these moments also involve music, and few are as funny as the introduction of The Bitches, who appear singing and dancing their way down the hall to …Baby One More Time (and it seems that with this sequence Ghuman has hit on the one excuse good enough for the use of a Britney Spears song). There are a lot of other weird and funny things in the margins of this film, with standouts including a religious fair where there’s a sign on the wall saying “Choose Your God, Make Friends” and the occasional use of animation; a child’s drawing, in place of the sky over Spork’s trailer.

From time to time you can see what must have been a tight budget begin to bite (this is never more notable than in the nightclub that Spork and Tootsie Roll go to, which seems to be held together with sellotape and have about six people in it), but again, I didn’t mind an occasional roughness around the edges. Leaving this aside the only major complaint I had about the film is the amount of swearing, not because I'm offended, but because it will keep Spork from getting the 12A certificate it should have in the UK to reach the audience it will mean most to.

The young cast is excellent. Savannah Stehlin is compellingly odd as Spork, it’s easy to see why, even leaving aside her intersex status, she’s an outsider at school, but she’s charming enough to ensure that you’re always on her side, rooting for her rather than laughing at her. Good as Stehlin is, the film is very nearly stolen from under her nose by Sydney Park, whose irrepressible energy as Tootsie Roll means that almost her every line scores a laugh. As the leader of The Bitches Rachel G. Fox is a perfect nightmare, like a junior version of Kim Walker’s school ruling Heather Chandler in the deathlessly brilliant Heathers. There are nice, if small, contributions from the cameoing adults though, including Beth Grant (in pretty much the same role she played in Dear Lemon Lima) and a very funny Keith David.

Dance is at the centre of the film, and it boasts an exceptional selection of songs and a quirky chiptune powered score by Casey James and The Stay Puft Kid, all of which adds to its slightly out of time 8-bit feel. The dance sequences are well choreographed, clearly executed (at least for the most part) by the actors and have a great energy to them.

This is Ghuman’s first feature, and for the most part it’s a confident and energetic debut. He uses a lot of stereotypes here, laughing as much at the stereotypes themselves as the kids that embody them. He also uses those stereotypes to, in the end, shatter many of them and to get the film to its heartwarming ending. In that way Spork feels like a low budget 8-Bit tribute to John Hughes, if Molly Ringwald were intersex. Your tolerance for quirkiness may vary, but I thoroughly enjoyed Spork, and I’ll be interested to see where Ghuman goes from here.
★★★★☆
Posted by Sam Inglis at 21:18