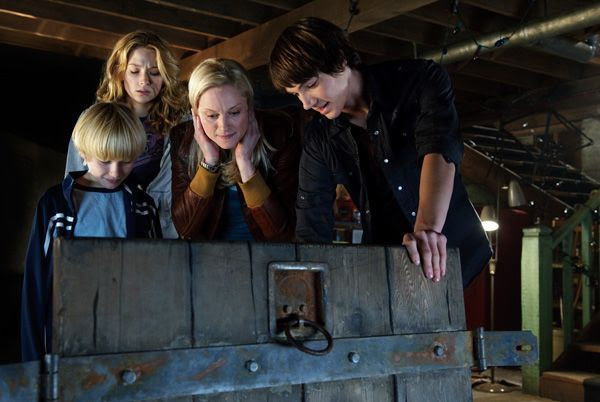 I should probably make it clear at the outset where I stand on Joe Dante as a filmmaker. For me, Dante and his films are one of the cornerstones; his work is one of the major reasons I ended up a film critic. Be it GREMLINS, the incredibly underrated INNERSPACE, the satirical genius of GREMLINS 2: THE NEW BATCH, the highly entertaining SMALL SOLDIERS or his little seen masterpiece MATINEE, when Joe Dante makes a film, I sit up and take notice. That being the case, I was excited to see THE HOLE, his first release since the 2004 flop LOONEY TUNES: BACK IN ACTION (a film I enjoy, apparently more than its director). Having been, to put it mildly, not entirely sold on the 3D ‘revolution’, I was also intrigued to see what a great filmmaker and visual wit like Dante could make of this new technology.

Sadly THE HOLE is one of the biggest disappointments of 2010. Even when they don’t entirely work (LOONEY TUNES is a total mess) Dante’s films have a verve, a level of invention and a giddy sense of fun that powers them through. That’s what is missing here, more than anything THE HOLE feels like a cookie cutter kids horror movie, and very few moments have anything to define them as belonging to a Joe Dante film.

The film’s story is very familiar; a couple of kids, 14 year old Dane (Massoglia) and 10 year old Lucas (Gamble) move with their mother (Polo) to a small, boring town. Then they, along with the cute girl next door (Bennett) find a trapdoor in their basement, which opens on to a seemingly bottomless hole. After they look in the hole, strange things begin to happen, and they ultimately realise that when you look into the hole your greatest fears emerge from it.

It’s not as if THE HOLE is a total disaster. It has scenes that work very well indeed, and it is scary at times (likely more so if you’re 11). There is a series of very creepy scenes that stem from Lucas’ fear of clowns, the clown doll that comes out of the hole to attack him is brilliantly designed - just the right side of creepy that you could believe it’s a real thing - and Dante uses it well, never letting us see it for too long, and exploiting its easily exaggerated shadow and the sound of the little bell on its hat to unnerving effect. The problem isn’t the effectiveness of the individual scene, so much as the fact that it, and all the rest, feel like individual scenes rather than integral parts of a greater whole.

Dante is a past master with young protagonists, and yet his touch seems to desert him here. In his other films the juvenile heroes have felt like real kids, but here they feel like movie kids. There’s not enough depth to Dane and Lucas for us to really invest in their relationship (it doesn’t help that their arc is the older than dirt transition from “I hate my little brother, he’s soooo annoying” to “I have to save my little brother”) and Haley Bennett’s pretty neighbour has little more character depth than is contained in that description. The performances are little help, Nathan Gamble is serviceable as Lucas, but Massoglia and Bennett both perform as if they are representing the USA in Olympic level blandness.

When the kids finally venture into the hole things sadly fail to look up. I’m not sure, given that Dante is among the most cine literate filmmakers out there, whether the fact that the film’s last twenty minutes seem like a long rip off of/tribute to Bernard Rose’s brilliant and tragically underseen PAPERHOUSE is intentional or not, but THE HOLE comes off as a pale shadow of that movie. There are some cool bits of design (though a few do seem rather more from the mind of a Tim Burton than a Joe Dante), but the fact that it constantly reminded me of a better film, and the fact that I didn’t really know or much care about these kids made for a truly uninvolving finale.

I was hopeful that Joe Dante could do something fun and interesting with 3D, but he doesn’t. THE HOLE was, at least, shot in 3D, so it looks… okay. Happily it doesn’t have the viewmaster look so prevalent in converted films and the colour timing seems to have been done with the glasses in mind, but I still question the point of the process. The big problem is that this technology is still new and somewhat unwieldy, and that shows through in the visual flatness of this film. Were it not in 3D this would feel more televisual than cinematic. Outside of gimmicky shots looking down into or up from the hole and an utterly pointless, attention calling, tribute to HOUSE OF WAX the 3D is, for the most part, barely exploited. Okay so there’s depth in the image, but if you don’t think 2D cinema can do depth then you’re either an idiot or you’ve never seen a well photographed movie. I can perhaps see the argument for rendering the world inside the hole in 3D, okay it would be a gimmicky moment…”put your 3D glasses on NOW”, but 3D is a gimmick, and at least it would provide a contrast between the two worlds thereby serving, at least to some degree, a storytelling purpose. Instead what we have is an already overworked gimmick that serves little to no purpose, because there is not one shot in this film that needs to be 3D.

The biggest shock of THE HOLE for me was simply how little fun I had watching it. There are occasinnal compensations like the cameos (Dick Miller, yaaaaay) and the fact that Teri Polo, though she’s stuck in the thankless Mom role, is just lovely to look at. Outside of that though, it’s slim pickings. The clown is freaky as all hell, and there are a few impressive visuals, but this is Joe Dante’s least individual work, and that’s what makes it a crashing disappointment.
Posted by Sam Inglis at 14:48