Why is it on the list?
May is a strange little movie, very much a horror piece, but like another horror film named for its young, redheaded, lead female character, it’s also very much a character piece and one that makes you identify and sympathise with a character whose actions become extreme, even deadly.

In this case that character is May Canady, a socially maladjusted young woman in her mid twenties. She works for a vet, reads about amputation in her spare time, keeps one of her late mother’s dolls (which she talks to like a friend) in a glass case and speaks to very few people. Until she meets Adam (Jeremy Sisto). May falls for Adam because of his hands and though he seems a little taken aback by her strangeness horror geek Adam takes an interest in this slightly morbid, very pretty, girl who seems to be head over heels for him.

May likes parts of people, but ultimately finds the wholes to be disappointing (Adam, finding her too odd, even for him, goes back to an old girlfriend) and so she takes her mother’s childhood advice… ‘if you can’t find a friend, make one’. That advice is the jumping off point for an oddly moving piece of horror cinema, splattered with gore, sure, but also genuinely emotionally engaging.

Much of that engagement is thanks to the excellent leading performance of Angela Bettis (whose still barely known status is a mystery to me). Bettis makes May an identifiable outsider, someone whose loneliness you understand, without making her so dysfunctional that you can’t feel for and root for her, or indeed understand when characters like Anna Faris’ Polly (the gay receptionist at May’s job, who is nursing a crush on the shy cutie) reach out to her. Faris, for her part, is an absolute scream as Polly, this part was a revelation after watching her go through the motions in the mindbendingly abysmal Scary Movie; she’s sparky and funny and completely off the wall and her scenes with Bettis are some of the film’s best.

Lucky McKee handles the horror elements well, with some proficient gore effects, but what really sells the nastier moments is how personal they feel, and never more so than when May takes a pair of scissors to her eye. It’s not that explicit, but it looks so painful, and Bettis’ howl of pain is so real, that it becomes one of those moments that really gets under your skin.

What really makes the film for me though is its ending. It is the only substantial moment of surrealism in the movie, indulging – just briefly – in May’s delusion, and yet it almost always brings me to tears, because at some level it’s the only happy ending possible for this character that you will have come to care about. It’s a strange way to react to a delusional serial killer, but that’s what May does to you. 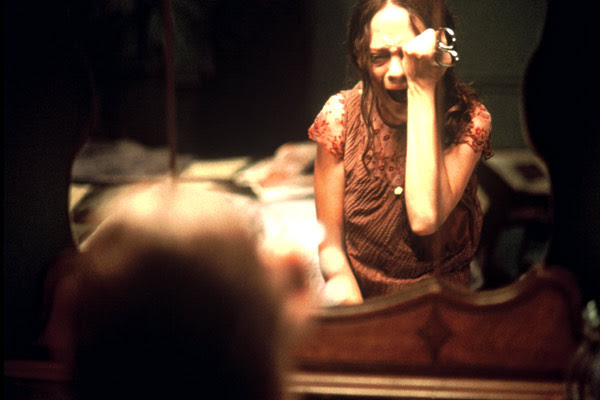 Standout Scenes
Polly
I’m cheating a bit, but ANYTHING with Anna Faris’ Polly is just gold.

Halloween
May’s Halloween makeover is a great look for her, and the shift in the character when she decides to make a friend is wonderfully handled by Bettis.

Ending
Strange, disturbing and moving. Just like the movie really.

Memorable Lines
Adam: Whatcha readin' about?
May: Amputation.
Adam: Is that for work?
May: Nope. It's just for fun.

May: [to Suzy, the doll] I told you to face the goddamn wall!

Polly: You're funny. You want to watch me file?

[after watching Adam's cannibalism movie]
Adam: So, what'd you think?
May: It was sweet... I don't think she could've got his finger off in one bite, though. That part seemed a little farfetched.

May: So many pretty parts and no pretty wholes.
Posted by Sam Inglis at 11:21