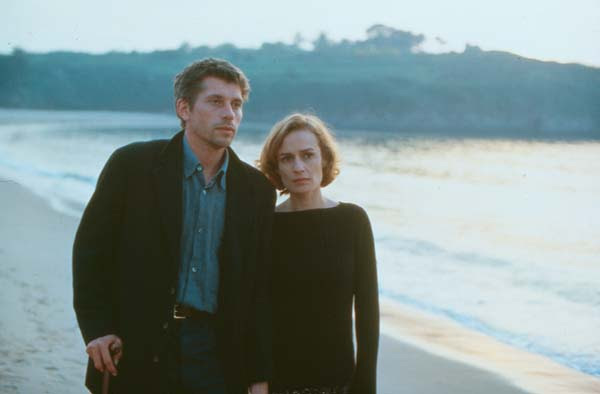 For me this very slow moving and eventually slightly unsatisfying mystery is one of the weakest of Chabrol's films that I've seen. Valeria Bruni Tedeschi seems ill at ease, and frankly miscast, giving a dull, monotone, performance as the new Police inspector leading the investigation into two murders in a small community. Jacques Gamblin is also weak, though he overeggs things as Tedeschi's prime suspect.

There is better news too though; the ever brilliant Sandrine Bonnaire is as impressive as I've come to expect as Gamblin's unfaithful, increasingly suspicious and distant wife, and Antoine De Caunes (best known in the UK as the host of bawdy TV show Eurotrash) is effective as a slimy, self-regarding, local author. What's most interesting though is Chabrol's sure grasp on little details; the depiction of small town life is beautifully observed, as is the emotional distance between people (most notably Gamblin and Bonnaire). A disappointment then, but not without merit.

Chabrol's late-period muse, Isabelle Huppert is, again, absolutely outstanding, playing a woman Chabrol considers 'pure evil' in this dark, understated, thriller. This is Chabrol at his Hitchcockian finest. Along with Huppert he creates an interesting femme fatale. There's little outward sign of Mika's evil, but it's under the surface of almost her every word and gesture, polite though they are on the surface. As ever, Huppert gives us an ocean of depth beneath an immaculately, studiedly, cold and hard to read exterior.

Merci... doesn't get its thrills in the usual visceral fashion, instead it draws you into a situation, as the appearence of Anna Mouglalis; a gifted young pianist who may be her husband's daughter, shakes the very rigidly defined world of Huppert's Mika. Chabrol has often been accused of simply copying Hitchcock (that's bollocks), but this film does owe the master of suspense a great debt. The thrust of the story; a possible mix up, 18 years ago, which may mean that two parents have the wrong children, as well as the sweet but deadly chocolate (made by Mika, who, at least at first glance, might be described the same way) would have appealed to Hitchcock.

Visually Chabrol very much has his own style; very designed and artful, and generally quite slowly paced, with lots of shots (especially the last, dveastating, shot of Huppert, running very long. Like many of Chabrol's films this is a slow burning thriller, which works more on what's not said than what is, but Huppert is magnificent and Anna Mouglalis and Jacques Dutronc lend strong support. It's a rewarding watch if you don't mind the slow pace.
Posted by Sam Inglis at 11:07