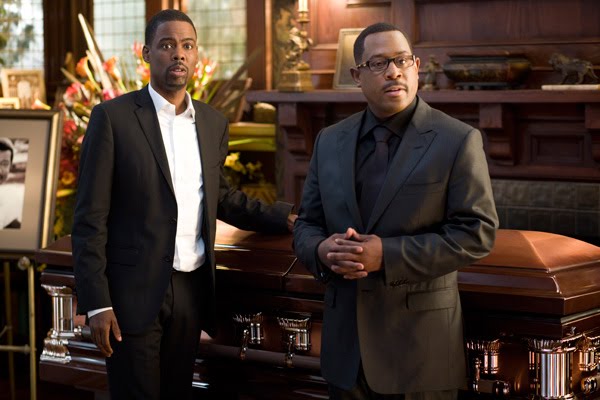 It’s the same question that has run through my mind in a great deal of recent ‘comedies’. Why? Why in the name of all that is holy did this get made? Who thought it was funny? Did somebody owe somebody else money? Was it a favour to someone’s cousin? How and why did this happen? It’s even more inexplicable here, because this is not the first time that Death at a Funeral has been made. It began life just three years ago as a British film directed by Frank Oz, which attracted universally scathing reviews and miniscule box office. Its existence has now been all but forgotten. So why remake it?

The answer, sadly, appears to be demographics. Apparently the script for this version is extremely faithful to the original (so much so that Dean Craig, who wrote the 2007 film, is the sole credited writer here). The big change, of course, is that the film now has a largely black cast and is set in America. The plot is the same; a farcical comedy which sees Aaron (Rock) having to deal with all manner of catastrophes while trying to host his Father’s funeral (including a man (Dinklage) who was his Father’s lover, and is trying to blackmail Aaron and the fact that his cousin’s boyfriend (Marsden) has accidentally been given hallucinogenic drugs). It’s so similar, in fact, that the blackmailer is once again played by Peter Dinklage, whose career must be in trouble if he’s doing this desperately unfunny shit for a second time.

It’s hard to describe how completely unamusing this film is. It’s all turned up to eleven, with people screaming and falling over at every possible opportunity from start to finish. The often yelled dialogue is like a constant headache even before you stop to contemplate its awfulness. Jokes are hammered home with endless repetition (one that wear out its welcome especially fast is the way everyone sees Aaron’s brother (Lawrence) as the golden child) and even the ones that start out a little funny (Marsden on acid) wear out long before the merciful relief of the end credits.

Nobody has an actual character to play, just traits. Chris Rock gets the closest to having a personality, but around him there’s the horny asshole brother (Lawrence), Aaron’s wife (Regina Hall), who just wants to make sure they have sex, because they’re trying to get pregnant, Danny Glover is grumpy, Tracy Morgan is a screaming hypochondriac, Ron Glass is… I honestly don’t know, a slightly less grumpy Glover? I think they forgot to give him any actual character points. Zoë Saldaña is there to look pretty and run around after Marsden, Loretta Devine screams and cries a lot, Keith David… says a few lines. Luke Wilson is an asshole ex-boyfriend of Saldaña’s (actually, everyone in this movie is, to some degree, an asshole, perhaps that’s why I just want them all to shut up). There’s a lot of talent in this cast, but depressingly none of it is on display here.

In perhaps the ultimate metaphor for this movie its major set piece involves Danny Glover shitting on Tracy Morgan’s hand. It’s like watching comedy being beaten to death with a frozen turd. Glover hits Morgan with a stick, while yelling. Morgan yells, and yells, and yells. I assume the crash position. Oh God, they’re still yelling, can someone write some dialogue that isn’t “arrrggghhh”? Honestly, what’s funny about this? Is poo automatically funny? Sure, when you’re seven, but seven year olds didn’t make (and aren’t allowed to see) this movie. Is yelling funny in and of itself? Maybe, but not here, I’d rather have gone outside and listened to the roadworks on Oxford Street, at least they have some discernible purpose.

Neil LaBute should be ashamed of himself. He’s a talented filmmaker, capable of using comedy to both amuse and deeply unnerve an audience. Here I wonder if he did anything aside from sitting in a chair and saying action and cut. Nothing about this film feels directed. The camerawork would make a sitcom look inspired and the cast are all flailing desperately in search of anything worth saying, doing, or connecting with. It’s a terrible shame to see what LaBute has reduced himself to here, it would be more dignified, if he really needed the money, to simply offer an executive a handjob.

Happily I wasn’t alone in finding this film about as amusing as stubbing my toe. I heard perhaps one chuckle during the entire running time, otherwise you could have heard a pin drop. I would rather go to an actual funeral than this movie, largely because they’re funnier.
Posted by Sam Inglis at 12:13