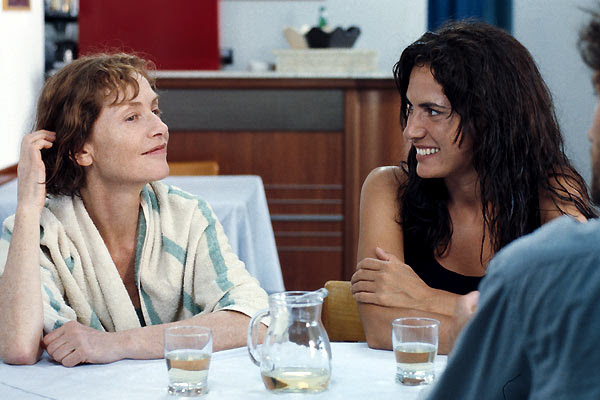 There’s something about French cinema, it just seems to be more adult, if not always in content (certainly Villa Amalia contains no swearing, no sex, no violence and no nudity) then in intent. American movies, for the most part, seem to be made for very stupid children. Everything gets spoon fed to us; emotion (if there is any), is usually writ large, characters have one, perhaps two, traits in place of a personality and every plot point is explained as if the audience had the collective mental capacity of a retarded chimp. That’s why it’s so refreshing to see films like Villa Amalia.

As the film opens two things happen, just about simultaneously, to Ann (Huppert); first she sees her partner of fifteen years kissing another woman, then, seconds later, she bumps into childhood friend Georges (Anglade). Spurred, perhaps, by these two events, Ann dramatically changes her life. She secretly sells her apartment, abandons her career as a concert pianist, and determines to, as thoroughly as possible, vanish.

The film divides pretty neatly in two. The first half, set in France, is generally a bit darker, and puts its focus more on people, with lots of medium and close shots. As Ann leaves her former life behind the film acquires more light, and becomes more expansive, and in the second half, as she winds her way through Europe, seemingly without much of a plan, the camera pulls back to give her lots of space, to show her newly acquired freedom. It doesn’t smack you over the head with this visual metaphor, but it’s there.

In fact, very little is signposted here. We never really know why Ann’s reaction is so definite, so fast, and so final. She tells her partner Thomas (Xavier Beauvois) that she’s not angry, but it’s hard to buy that (and I suspect that Ann finds it equally hard to believe). It’s also unclear, for a while, what Georges is, or wants to be, to Ann. Anglade plays him as a man carrying a torch, but a moment late in the film calls this into question. Perhaps the heart of it is that Georges (who lives alone in a huge house, and has just lost both his mother and his ‘best friend’) is very lonely. There’s certainly a melancholy running through Georges and Ann’s story, and Anglades’s sensitive, underplayed, turn really brings that out affectingly.

Isabelle Huppert, as ever, is in a class of her own. At one point Maya Sansa’s character asks “Where did you get that face?” It’s an interesting line because Huppert isn’t the most obvious beauty, but she’s got a fascinating face. When she’s on screen, whether or not she’s talking there always seems to be something going on with Huppert. Many actors seem to be waiting to talk, the great ones (and I’d put Huppert in the top few percent of that list) react, not just to other people’s dialogue, but to everything. She doesn’t do anything huge, but the fact that you can see her thinking means that Huppert allows you to identify with this difficult, distant, woman, and to go along with her on her journey.

The whole film looks lovely, but it’s in the second half that Benoit Jacquot really gets to cut loose, allowing his camera to drink in the beautiful scenery that Ann has retreated to. For perhaps fifteen minutes the film is largely dialogue free as it follows Ann’s journey, and there are some breathtaking shots along the way.

I could understand if people don’t like Villa Amalia, it’s not an easy film. The characters motivations are sometimes difficult to fathom, and though it is beautiful to look at the film moves very slowly, and not much actually happens (even when Ann forms a relationship with Maya Sansa’s character it is communicated almost entirely by shots of them sleeping next to each other). However, thanks largely to Huppert and Anglade’s expert performances, I was completely taken with the film. I wasn’t annoyed that it wasn’t spelling out Ann’s character and motivations, in fact I was intrigued by that and by her and I was enchanted by the beauty of the scenery and of Isabelle Huppert. It’s essential for Huppert fans, and recommended if you don’t always need things to explode.
Posted by Sam Inglis at 14:03