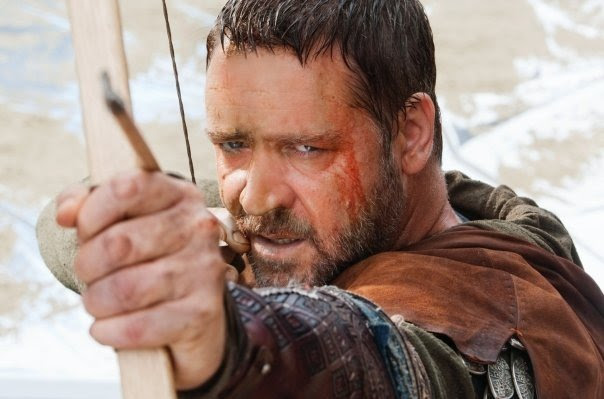 I have seen worse films than Robin Hood this year, and will certainly see more, but of everything I’ve seen this year no film, not even the awful remake of A Nightmare on Elm Street, has encapsulated so completely the reason why most Hollywood films are so awful. This Robin Hood started life as Nottingham, a spec script that apparently radically reimagined the myth, and posited the sheriff of Nottingham as the hero and Robin Hood and his gang as something closer to a group of insurgent criminals. Ridley Scott has described that script as terrible, and said it was a page one re-write (which begs the question of why he got involved to begin with) but at the very least Nottingham might have been an interesting take on the Robin Hood story, while at the same time retaining enough familiar elements to still feel like a Robin Hood story. Instead what we get is a dour, dull, film, which seems to have little idea of what story it is telling and feels as though it has been cut to ribbons between filming and release.

The first thing that has to be said is that Robin Hood is no more a Robin Hood film, at least in any recognisable fashion, than a film called The Three Musketeers which ended with D’Artangan’s first fencing lesson would be a Three Musketeers film. The story is totally unrecognisable, in fact this is a prequel, barely a story in itself it is in fact a two and a half hour setup for sequel, which, by the end of this determinedly unentertaining opening chapter, you’ll be praying that you never have to see.

The story sees Richard the Lionheart (Danny Huston whose English dialogue, in a film that purports to historical accuracy, is a pretty big crime) killed during the crusades. When the party bearing his crown home is ambushed and killed (as part of a French plot led by Mark Strong as the traitorous Sir Godfrey) Robin and his men Little John (Kevin Durand), Will Scarlet (Scott Grimes) and Allan A’Dayle (Alan Doyle) take the crown back to London and to the now King John (Isaac). Robin, here named Longstride, has promised the man he’s been pretending to be, one Sir Robert Loxley (Douglas Hodge) that he’ll take a sword back to Loxley’s father (VonSydow), when he arrives Loxley as Robin to pose as his late son, and husband to the feisty Marion (Blanchett) to prevent (HOW?) their land being taken when Loxley dies. That’s the setup, but there’s a lot more; a ridiculous amount of talk about tax (finally, another blockbuster after The Phantom Menace that recognises the thrilling potential of arguments over tax policy), a couple of totally perfunctory battles, a hugely forced (and ridiculously fast) romance between Robin and Marion are just a few of the storylines competing for your, and the filmmakers, attention.

However good an actor you think Russell Crowe is (and I’ve got to say, I’ve never been entirely won over by him) he’s completely miscast here. First of all, Crowe is in his mid 40’s, in fact he’s older even than Sean Connery was when he played an old Robin Hood in (much better) revisionist version Robin and Marian, and so setting this up as a prequel to all the better known tales makes little sense. This was a time at which most men, especially poor ones, died by the time they were 40 and the weather beaten Crowe looks every one of his years. The casting would be less of an issue if Crowe stamped any authority on the part, but he doesn’t. In a joyless film his is the most joyless work, he seems bored, speaks much of the (often risible) dialogue with a barely disguised contempt and generally looks both miserable and bored, even when acting opposite the magnificent (and, though she is dressed down here, luminously beautiful) Blanchett. There are further problems with Crowe’s credibility thanks to his accent, which sometimes has an aussie twang to it, but more frequently migrates between Ireland and Northern and Midlands England, it wouldn’t be such an issue if there were some consistency (Kevin Costner’s Californian Robin Hood is silly, but at least it’s consistent and you adjust) but instead Crowe’s accent chops and changes from speech to speech.

Strictly speaking, at 41, Cate Blanchett is also at least ten years too old for the role of Marian, but to her credit her performance is perhaps the only thing in Robin Hood that unambiguously works. She’s done the English accent before, for the Elizabeth films, but here she’s less clipped, giving Marion a voice that is both consistent and suited to both location and class. The script makes Marion something of a feminist caricature, but even so, Blanchett sells almost every word, and those moments she can’t make work are solely the fault of screenwriter Brian Helgeland and of Ridley Scott. One especially awful moment comes in the big battle scene, when Marion squares up to a foe she’s every reason to want to kill and, having set her up as a tough woman, able to fend for herself, the film bottles it in seconds so it can have her rescued by Robin. It’s a betrayal of both the character and Blanchett and it rings completely false.

Talking of things that ring false… Oscar Isaac. As King John the unknown Isaac is just titanically awful, swinging wildly between bland inexpressiveness and ridiculous scenery chomping (“I declare him to be an OUTLAAAAWWWW”) by the end of the film John’s beard (artfully trimmed for 1199) is a more interesting and layered character than the king himself. As the real villain of the piece, Mark Strong is decent enough, but after Sherlock Holmes, Kick Ass and then this performance in quick succession, it is beginning to look like there is a particular, and largely unchanging, Mark Strong performance.

In terms of delivering the expected Robin Hood goods, Scott and Helgeland do it only in the most grudging and perfunctory manner possible. There is one scene in which Robin and his men hold up a cart transporting grain (and Crowe makes, presumably at gunpoint from his delivery, an awkward reference to them being made merry), but it lasts barely a minute. We learn, late on, that Kevin Durand is playing Little John, but there’s no reason behind the name, nor is he ever recognisably Little John. In the incredibly forced and quickly dispensed with coda King John describes Robin as “also known as Robin of the hood”, which is laughable, since the only reference to that name in the whole film is in that one minute hold up (also the only time he wears a hood, by the way). It’s as if, every few weeks during shooting, someone nudged Ridley Scott and reminded him of the title of his film, and so a short scene was written, shot and inserted as hurriedly as possible.

Of course the script problems don’t end there. Amazingly the screenplay manages to be incredibly talky and dull, while not actually saying anything much. Take for example Robin’s backstory, to which much implied importance is attached (especially regarding something his Father apparently said “Rise and rise again, until lambs become lions”), plenty of screen time spent on this, and yet nothing really comes of it, Robin turns over an old stone, reads the words, and then we’re back to our main feature, already in progress. For a film that is about exploring the origins of a legend this one presents a frustratingly incomplete picture (indeed Robin is really a very minor player in the overall story). There are also huge gaps in the film’s logic. The aforementioned relationship between Robin and Marion seems to go from her initial ‘come near me and I’ll cut you’ atttitude to their being hopelessly in love within 48 hours. That’s small beer, however, compared to the plot line which has Robin impersonating Robert Loxley, in which we are supposed to believe that villagers will automatically buy this ruse, though the two men don’t look very similar, just because Max VonSydow, whose character is blind, say it is so.

For Ridley Scott’s part, the film does look decent (and at a cost of $237 million it bloody well should), the period recreation and production design are beyond reproach and while I’m not sure it fit Robin Hood, the dark, gritty, washed out look that Scott has adopted here is beautifully executed. What works less well is the editing and the pacing of the film. The editing really comes unstuck during the battle scenes, which look rather messy and are uninvolving because of that. It’s choppy, as if individual frames have been removed within shots, and this emphasis on technique removes us from the action. The pacing is well and truly broken. The midsection of the film is saggy, full of talk, often about tax, and always deathly dull, and it seems to last forever. The battles that provide the only real entertainment in the film come right at the start and the end of the film, and both are brief, and of very little importance to the story (though that’s true of just about everything in the film, to be fair). The biggest problem occurs after the second battle, it seems that Scott has now realised how arse-numbingly long (140 minutes) his film is and in three minutes, with no justification at all, he has Robin declared an “OUTLAAAAWWWW”, the Sheriff of Nottingham (Matthew MacFadyen, who has about seven lines) putting up a wanted poster for him, and Robin and Marion moving to Sherwood. WHY? Why is any of this happening, where the hell has the half hour of film that clearly needs to be there to set this coda up gone? Why can’t we see that instead of arguments about tax, Friar Tuck (Mark Addy) and his bees or Allan A’Dayle playing his magically amplified lute again? Did a chimp edit the last act of this film? What. Were. They. THINKING?

I might have gone a touch easier on this film if it had had a different title, but at the end of the day one of Scott’s key sins here is calling a film Robin Hood and then making a film that bears almost no relation to Robin Hood. Of course, it doesn’t help that it’s badly acted, overlong and also somehow too short and utterly, utterly, tedious.
Posted by Sam Inglis at 14:11