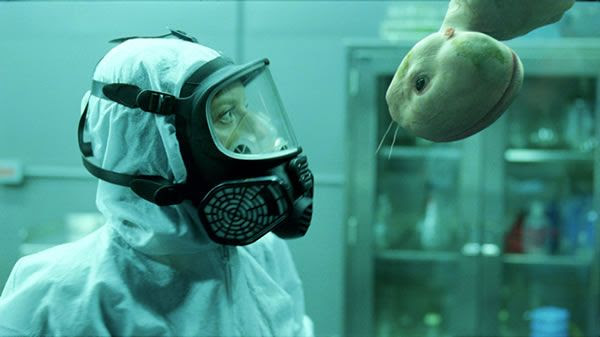 I’ve been trying to write this review since Thursday morning, and failing. I think that’s because Splice is such a mixed bag, such a mish mash of god ideas, bad writing, fine performances, clever moments and some scenes so misplaced that they beggar belief that getting a handle on the film as a whole has been a real problem.

To begin with the good stuff; Vincenzo Natali’s latest has idea with plenty of contemporary resonance, and it at least attempts to do something thought provoking with it. It’s about scientists Elsa and Clive (Polley and Brody) working in gene splicing, creating new organisms so that they can, hopefully, treat genetic diseases in animals and humans. During one experiment ‘just to see if they can do it’ they add human DNA to the mix. The resulting creature grows at an accelerated rate, and when it is ‘born’ Elsa can’t bring herself to let Clive kill it, so they hide ‘Dren’ (played as a ‘teenager’ by Chanéac) and Elsa begins to treat her almost as a dughter.

The premise has some interesting ideas about the ethics of both genetic engineering and medicine for profit, but they largely get forgotten as Splice mutates into a monster movie. The first two, low key, acts showcase impressive performances, notably from Polley, whose innate warmth is useful in the scenes with the young Dren, but gives way to a surprisingly chilling character later on, especially in what could almost be described as a torture scene. Unfortunately the character development flies out of the window with half an hour to go, the shark jumping moment signalled by a sex scene so miscalculated it’s laughable (and, along with another scene in the third act, has a worryingly leery quality). At this point it just becomes one more rather dull monster movie, characters ticked off one by one… blah, blah, blah. A shame really because it could have been so much more, particularly if it had followed through with the twisted Brady Bunch dynamic of the middle of the movie.

Splice is an interesting mess, but a mess all the same. 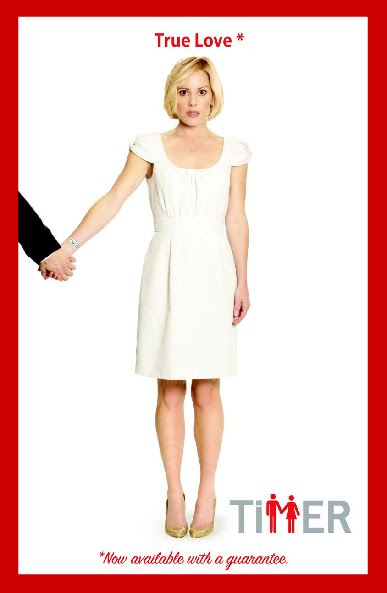 TiMER is one of those out of nowhere little treats that really remind me why I love movies. It’s got a simple premise; in what appears to be an alternate present, rather than the future, there is a device called TiMER, which is implanted on a person’s wrist and, when that person’s soulmate also gets a TiMER, begins counting down to the day you will meet them. The story centres on Oona (Emma Caulfield), who is approaching 30 and still has a blank TiMER, despite dragging many boyfriends to have one fitted, hoping they will ‘zero out’ together. Then she meets Mikey (Amedori); a young musician who hits on her, initially she turns him down, because his TiMER has four months to run, so he’s clearly not her ‘one’, but they soon begin a relationship and Oona starts to have feelings for him.

TiMER is, obviously, a romantic comedy, and yet I almost hesitate to describe it as one, because that means putting it in a box with the hateful, soul destroying, likes of The Bounty Hunter and The Ugly Truth, and this smart, witty and charming film really doesn’t deserve to be associated with those and the myriad other pieces of rom-com excrement that Hollywood turns out each year. First of all, Jac Schaeffer’s screenplay has much more going for it than just a high concept idea, it is consistently, hilariously, funny. Almost every other line provides a laugh, and there are some wonderful visual gags too, as well as moments that combine the two (Oona’s line when her little brother gets his TiMER installed and it reads 3 days is priceless).

A good script builds a solid foundation for the film, but the cast really brings it to life, and TiMER has lucked out with its actors. Emma Caulfield has, for some reason, struggled to bring her dazzling comic talents off the television screen (she played Anya the ex vengeance demon in Buffy the Vampire Slayer) and into cinemas, TiMER, assuming it gets distribution here, ought to cure that. She’s wonderful as Oona, there is a little of Anya about her in the opening scene, but thereafter she really establishes a personality for Oona that’s a long way from her Buffy role, the similarity is really that she brings that same pitch perfect comic timing to every exchange, sometimes she’ll get a laugh just by when she chooses to pause for breath. Caulfield also makes for an engaging romantic lead, like Sarah Polley she has an innate warmth about her screen presence which makes you root for her almost instinctively, and she handles the film’s (limited) moments of drama with aplomb too.

In support, John Patrick Amedori gives a natural and nuanced performance as Mikey, unlike so many male rom-com leads he’s not perfect and he’s not one note either; he can be very charming, but he’s also got a coarser, more childish, side (which comes out notably in a very funny, apropos of nothing, conversation about boobs), it’s refreshing to see suitor in a romantic comedy who is neither the obviously perfect guy that the heroine is destined for nor simply a shallow asshole who exists purely as an obstacle for Mr Perfect. It may seem routine, writing characters who actually have character, but it’s actually rather rare and TiMER has a cast full of rounded interesting individuals. Also especially worthy of mention is Michelle Borth, uproariously acerbic as Oona’s stepsister Steph (she’s especially funny dealing with the elderly patients at the care home she works in), her acidic lines play nicely, but you also feel a connection between Steph and Oona, it’s easy to buy them as best friends, and thus, when they fight, you’ve got a real investment in it. Also, in a real treat fro Buffy fans, Kali Rocha (who played Anya’s demon friend Halfrek) pops up in a two scene cameo, and is hilarious.

There are some strong and interesting ideas in TiMER (if they existed would you want one?) but it’s not overly concerned with getting into the morals of the device, or even the practicalities of how it works, but that’s fine because while you could make a film about this device that was an angst ridden drama, and went to some really dark places, that’s not this movie. This is a romantic comedy, and on those terms it delivers completely, every single one of its 99 minutes has something funny in it, the romance works well and is nicely acted and the film’s writing and look mark debut director Schaffer out as a talent to keep a close eye on.
Posted by Sam Inglis at 18:53