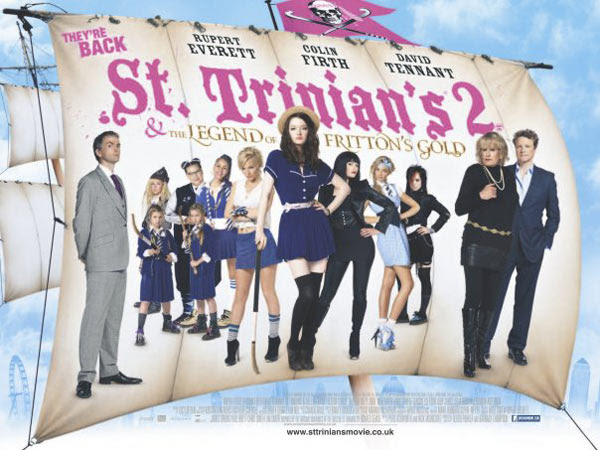 What’s it about?
Miss Fritton and her girls at St Trinians are back once again this time on a mysterious adventure in the search for Fritton’s gold.
David Tennant aka Dr Who aka Barty Crouch Jr. plays the baddie in this off beat school comedy. He tries to stop those mis matched, down right naughty little school girls who should all see me for detention! Oops, lost myself then…. Yeah that’s about it really.


What did I think of it?
It’s silly, sillier than the first one. So that makes this shit. For starters and I will warn you as I am about to spoil the end. Apparently Fritton’s gold is a book written by William Shakespeare who in fact was actually a woman?! Need I say more? This film is absolutely shocking. Colin Firth should never be allowed to act again, along with David Tennant, Although I am pretty sure this is the only work Rupert Everett can get now so that’s fine. Just admire all the sexy schoolgirls especially Gemma Arterton. Wow I wish she went to my school.


Who is it for?
Adolescent boys and children, although the thought of them in the same place is kind of wrong.


What is it like?
St Trinians meets Grange Hill.


Good Stuff: The Dads can enjoy the schoolgirls when they take their children to watch it.


Bad Stuff: THE FIRST 105 MINUTES OF THE FILM (except the schoolgirls).
Posted by Sam Inglis at 09:00